Shots of THE BAD AND THE BEAUTIFUL

I love classic Hollywood-on-Hollywood movies.  Vincente Minnelli's THE BAD AND THE BEAUTIFUL is one of the best.  I've seen this film countless times and I never, ever tire of it.  Kirk Douglas stars as the sophisticated, handsome and ruthless film producer named Jonathan Shields.  He's ruthless but he makes great films.  I totally dig how his story unfolds through the narratives of three formerly co-dependent co-workers in the Hollywood dream factory.  There's the Oscar-winning director, the Top Ten female box office star and the Pulitzer Prize-winning screenwriter.  Jonathan was the worst yet also the best thing to come along in their careers.  Each got to a place of independence and artistic strength after getting the power to be fed up and move on from Jonathan.  But without his manipulative help, they would not be the Hollywood heavyweights they are now. 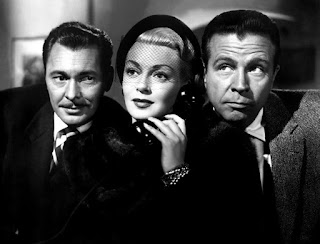 In his narration, the director mentions that Jonathan had a certain special style in his films that came to be known as "the Shields touch."  To me, the same could be said of director Vincente Minnelli in THE BAD AND THE BEAUTIFUL.  I love the visual motif of the telephone that he sets up in the opening shot.  The telephone will be a key item in Jonathan's relationship with Georgia Lorrison, the boozy and heartbroken bit player turned glamorous movie star. 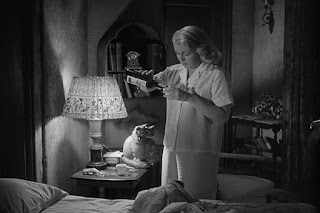 Georgia "taking a dip" in the swimming pool after getting boozed up due to fear and trashing her apartment, Georgia's auto-hysteria sequence, the way Minnelli choreographs Gaucho's blonde date from dancing with the Latin hunk to eyeing a hunk o' steak waiting for her on a nightclub table...those are prime examples of the Vincente Minnelli touch. 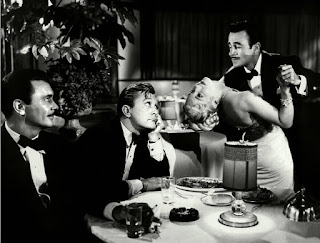 In this classic, one of my favorite examples of the Minnelli touch is the Hollywood party scene early in the film.  Jonathan and Fred, the future Oscar-winning director, are the new kids on the block.  They're unknowns who get invites to a Hollywood party that could be a great opportunity for networking.  Minnelli moves the camera, keeping a wide shot, with bits of dialogue overheard in the shot.  This is a style of film-making I miss today.  With all that business happening at once, all that chatter going on, you can still determine each type and what's occurring at the party. 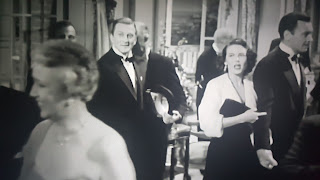 In the back, in the middle of the shot, there's a blonde movie queen holding court.  In the foreground, to the left, there's a portly producer eating while an agent pitches a client. 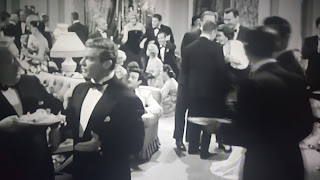 Before we actually meet him, we see the popular Latin lover leading man actor that everyone calls "Guacho" on a couch getting attention from his weakness -- a shapely blonde. 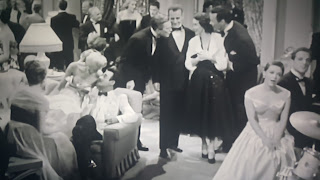 To the right of that frame, we see a touch of Minnelli's real life in that Hollywood party scene.  THE BAD AND THE BEAUTIFUL was a 1952 release.  THE BAND WAGON, his brilliant musical comedy, was a 1953 release.  During my VH1 years in the late 1980s, I sat next to Nanette Fabray on a flight from Los Angeles to New York.  We talked about her role in THE BAND WAGON.  She mentioned that Minnelli "was still in love with Judy" even though they'd recently divorced.  Look at the actress/singer to the right of that frame.  She's styled to look like Judy and she's doing something Judy was known to do at Hollywood parties -- sing wistfully for herself while a party was in full swing. 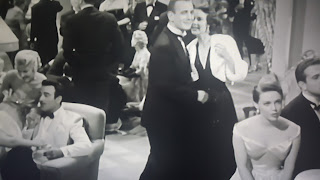 Notice that the singer resembles Judy's look from the IN THE GOOD OLD SUMMERTIME "I Don't Care" number in 1949. 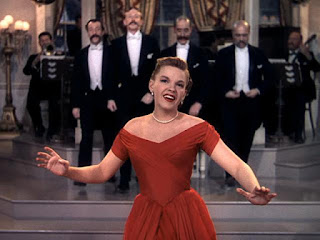 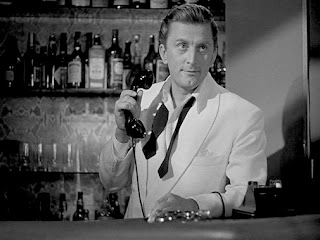