In the canon of films directed by William Wyler, DETECTIVE STORY isn't one that gets a lot of mention.  Not like Wyler's WUTHERING HEIGHTS, THE BEST YEARS OF OUR LIVES, THE HEIRESS, ROMAN HOLIDAY, BEN-HUR or the three Bette Davis classics he directed -- JEZEBEL, THE LETTER and THE LITTLE FOXES.  Just like Wyler's 1937 film, DEAD END, DETECTIVE STORY was based on a dramatic play by Sidney Kingsley.  1951's DETECTIVE STORY starred Kirk Douglas as a New York City police detective who can only see the worst in people.  One of my favorite Kirk Douglas performances is in this film.  Det. McLeod's anger comes out in harmful police brutality which he's been warned about by his precinct captain. 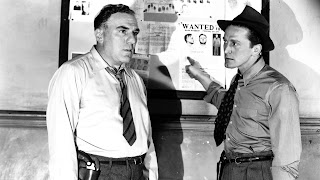 His once-happy marriage starts to suffer because, as his disappointed wife says, he's grown "cruel and vengeful."  Det. McLeod has become the very things that he hated in his father.  This cop is a case of the emotionally abused one now being the abuser.  Eleanor Parker racked up the second of her three Best Actress Oscar nominations as the good, loving and loyal wife who was not a virgin when she married him.  He didn't know that.  He hits his wife with verbal abuse and starts to treat her like she's just another cheap criminal.

Lee Grant got the first of her four Best Supporting Actress Oscar nominations for her performance as the awkward shoplifter in DETECTIVE STORY. 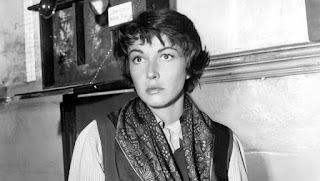 There's an opening exterior scene in which a cop abuses his law enforcement power as he parallel parks.  The cop's irresponsibility and carelessness loudly damages someone else's car.  He doesn't apologize.  This sets up the tone of the story and the serious flaw we'll see revealed in the main character who's played by Kirk Douglas.

There's a casting connection to DETECTIVE STORY and Stanley Kubrick's anti-war film, PATHS OF GLORY.  That's another classic featuring Kirk Douglas at his best.  In Kubrick's World War 1 film, Douglas plays Col. Dax.  He's the commanding officer who tries to defend a few of his men in a court-martial.  He feels they were set up to fail in battle by an ambitious general.  The innocent soldiers in danger of being executed are scapegoats.  The ambitious, irresponsible general in Kubrick's 1957 classic was played by actor George Macready. 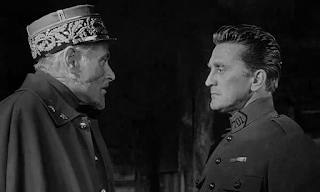 You saw Macready opposite Rita Hayworth as the jealous German who marries GILDA and as the tuxedo-wearing Manhattan gangster in Hayworth's Technicolor fantasy/musical, DOWN TO EARTH.  In DETECTIVE STORY, he plays a man accused of performing abortions.

The abortionist may have known the detective's wife before she and the detective met, fell in love and got married.

I have a question about a DETECTIVE STORY cast member.  And, yes, I raleady looked at Wikipedia and IMDb online sites.  The actor plays the black cop in the precinct.  The only black cop.  He has lines and he's seen in a good portion of the movie.  But he's not referred to by name which made it a bit tough to look him up. Does anyone know his name and background?  Was he in the original Broadway cast along with Lee Grant?

He was a handsome actor and bore a slight resemblance to James Edwards, the actor who played the African-American army veteran undergoing psychoanalysis in 1949's HOME OF THE BRAVE.  Edwards also played one of the Bay Area bohemian buddies to Elizabeth Taylor's character in THE SANDPIPER.  If you know who this black actor with Kirk Douglas is, please post a message and tell me.  I always notice him every time I watch DETECTIVE STORY.  I'd like to know if he did other acting roles. 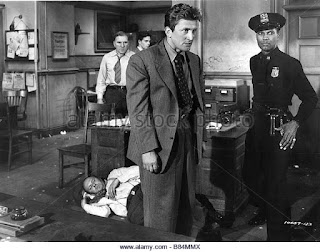 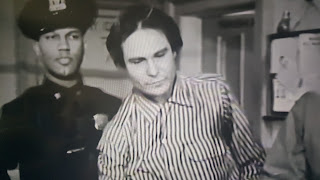