On TAKE A GIANT STEP

The 1970s.  Remember the hit song "I Can See Clearly Now"?  I bet you do.  Johnny Nash was the singer of that 1972 hit.  Did you know that he played a troubled black teen in a 1959 movie?  The movie is TAKE A GIANT STEP.  Nash played a high school student, the only black kid in his class.  TAKE A GIANT STEP is not one of the best films of that year but it's worth a look.  There's young Johnny Nash in a movie with a screenplay co-written by the man who gave us CASABLANCA.  That writer also produced TAKE A GIANT STEP.  Burt Lancaster's production company released the picture.  Lancaster was passionate about dealing with social issues in films.  Julius Epstein co-wrote the screenplay with black playwright Louis Peterson.  The movie is based on Peterson's play.  TAKE A GIANT STEP is a race drama.  One of the things that makes this worth checking out is the different image of a 1950S African American family it presents to us.  Nash's teen character lives in a mostly white neighborhood and attends a mostly white school.  He lives in a very well-kept house. 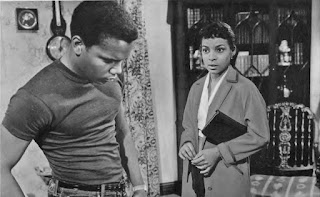 Think of the film version of A RAISIN IN THE SUN that came out in 1961 starring members of the original Broadway cast.  Walter and Ruth, played by Sidney Poitier and Ruby Dee, live with his mother and sister is a sad little two bedroom apartment on Chicago's South Side.  Walter and Ruth's little boy sleeps on the couch in the living room area because their poor place is small.

Spencer, the angry black teen in TAKE A GIANT STEP, goes home to a house that's large enough to need a staircase.  Not only that.  The family has....a housekeeper!  And the housekeeper remarks that Spencer's room was a mess.  Yes.  Spencer has his own room upstairs.  And Grandma has her own room upstairs.  His father is a bank teller and his mother works for the Red Cross.  This is a middle class black family in the late 1950s.  I came from a family of five. Both our parents worked.  I'm the oldest of three kids -- and I never had my own room until after I graduated from college. 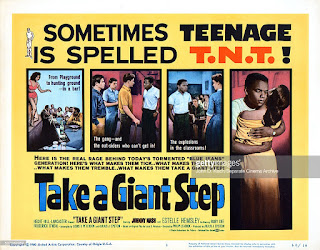 A black teenager living in a big house with his own room and a housekeeper who fixes his lunch.  And the way he talks to his parents  --- if this had been a Tyler Perry production, Madea would've gone upside that boy's head with a skillet in the first 20 minutes.

Handsome, neat Spencer stands in his class.  He's the only black student.  The other students look at him.  He glares at the teacher, takes his books and walks angrily out of the class.  Then....he goes into the boy's restroom....and smokes.  A cigar!  Here, Spencer looks like one of those bad boys in Disney's PINOCCHIO right before they turn into donkeys.  The janitor catches him and he's thrown out of school. 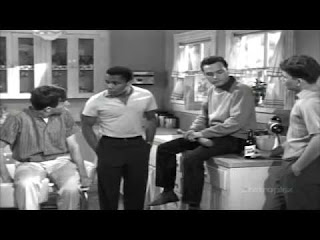 Spencer's dorky white buddies from school come over to visit.  But Spencer's politically incorrect, Archie Bunker-esque grandmother is in the kitchen with them during the visit.  And she's not one to keep her prune-like face quiet.  The guys like Spencer but the parents of their girlfriends don't want the girls hanging around "colored boys."

There are times when the writing is so odd that this seems like a lampoon of a 1950s race drama about teen life.  This isn't REBEL WITHOUT A CAUSE and Johnny Nash is no James Dean.  There are lines that are so wrong that they're entertaining.  For instance, Grandma -- after she basically complimented Hitler -- wants to know why Spence feels so agitated.  He answers that he's an outcast with those white buddies of his.  He says to his grandmother, "...I cramp their style with the broads."  Cigars and broads.  This is a high school senior.

Spencer is upscale but his social etiquette leaves a lot to be desired.  He's mastered the art of asking inappropriate questions.  To get away from his parents for a while, he heads to the black side of town and goes to not just one..but two bars.  And tries to get a drink.  At the second bar, there are three tough-talking floozies trying to raise rent money.  I love this section because wisecracks and insults peppered the dialogue.  Spencer, holding his schoolbooks, sits down with the three women.  He says, "Are you girls prostitutes or something?"  One answers, "We're trying to be."

Spencer's cute but he's clueless.  He's got a lot to learn.  And he will get back home to his large house with a staircase and his own room.  And a housekeeper.  That brings me to my main reason to watch this.  Two future Oscar nominees take this occasionally over-baked material and do something wonderful with their parts.  Ruby Dee plays the housekeeper and Beah Richards (GUESS WHO'S COMING TO DINNER and IN THE HEAT OF THE NIGHT) plays Spencer's mother.  They are excellent.

Keep in mind, this is a couple of years before Ruby Dee repeated her Broadway role in the film adaptation of A RAISIN IN THE SUN.  As you watch Ruby in this 1959 film, think of the 1963 movie, HUD.  Paul Newman played Hud and Patricia Neal won the Best Actress Oscar for playing Alma, the housekeeper.  Hollywood studios and the production codes were still a bit timid about race back then.  HUD was based on a novel by Larry McMurtry.  In the book, Alma was a black woman.  Patricia Neal was not a black actress but she sure earned that Academy Award for the film adaptation. 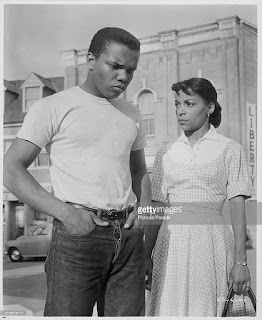 Watch Ruby Dee as Christine the housekeeper in TAKE A GIANT STEP.  Her scenes with Spence after he's survived the three floozies are so good.  Especially when she tells him about her life before she became his family's housekeeper.  She gives that role depth and dignity.  What a fine actress she was.

If Hollywood had not been so squeamish about interracial casting, Ruby Dee would have been an excellent choice to play Alma in HUD opposite Paul Newman.  I wrote the same about her A RAISIN IN THE SUN co-star, Diana Sands.

TAKE A GIANT STEP.  Not a great film, but it has moments -- and cast members -- worth watching.  Here's the story's lead actor, Johnny Nash, as most of us remember him: