It was such a hot Oscar race for Best Actress that it's still talked about today.  Judy Garland was nominated for her critically acclaimed big screen comeback in the 1954 musical drama remake of A STAR IS BORN.  She was at the peak of her musical powers in the film and she broke hearts with a stunning dramatic depth that had pretty much gone untapped during her famous MGM musical comedy superstar years in the 1940s.  Her top Oscar competition was Grace Kelly for THE COUNTRY GIRL, a drama in which glamorous Grace dressed down to play the stern wife of an alcoholic singer/actor on the skids.  Also in the race -- and making history with her nomination -- was Dorothy Dandridge for her sizzling performance as a doomed temptress in the musical drama CARMEN JONES.

Directed by Otto Preminger, this was an modern day version of Bizet's opera, CARMEN.  This deluxe 20th Century Fox production boasted an all-black cast with Harry Belafonte as the leading man.  Dorothy Dandridge broke a Hollywood color barrier and became to the first black woman to be an Oscar nominee for Best Actress.   Dorothy and Judy lost to Grace Kelly.  Today, people say that the Oscar should've gone to Judy Garland.  I agree.  If not to Judy, then to Dorothy. 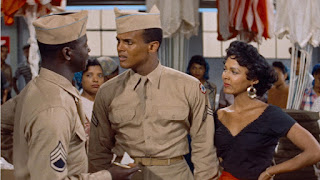 If you haven't seen this performance, you should.  First, it's one that made Oscar history.  Second, Dandridge's story after her historic nomination underscores why diversity and inclusion became such hot topics in Hollywood over the last couple of years.  And, personally, I'm glad they did.

By the time CARMEN JONES was released, Dorothy Dandridge was a Hollywood veteran. She and her sister can be seen singing in the "All God's Chillun (Children) Got Rhythm" production number in 1937 Marx Brothers comedy, A DAY AT THE RACES.  In the 1941 desert drama, SUNDOWN, we see Dorothy playing an African princess opposite Gene Tierney.  That same year, she had a knock-out speciality musical number in 20th Century Fox's SUN VALLEY SERENADE.  She and the magnificent Nicholas Brothers (one of whom she'd marry) sang and danced "Chattanooga Choo Choo."
Dorothy Dandridge had several brief screen appearances to her credit from the 1930s through the 1940s.  This is in the Old Hollywood, so you can well imagine how limited the roles for a black actress were.  It was either a musical appearance or you were the maid.  Or both were combined and you played a singing maid.  Dorothy sang, she played maids and Congo princesses.  She booked the genteel upscale role of a teacher in the scholastic drama BRIGHT ROAD, a 1953 MGM release co-starring Harry Belafonte.  Dandridge carried out the assignment as the proper lady teacher very well.  She does seem a little hemmed in by the material however. Her glamour and talent were liberated in CARMEN JONES. 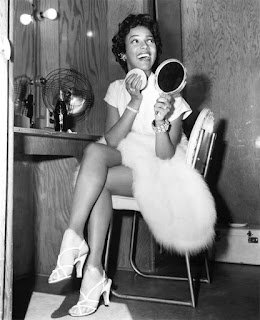 In CARMEN JONES, her star quality lit up the screen.  Her operatic singing vocals were dubbed but she did a great job of lip syncing.  And that performance.  Wow.  You'd never guess that her previous movie had her cast as a straight-laced school teacher.

Joining her in the cast were future Best Actress Oscar nominee Diahann Carroll (far left in the purple) and future Broadway Tony winner Pearl Bailey (in the middle under the large hat).  Dandridge was the first black woman to make the cover of the prestigious LIFE magazine. 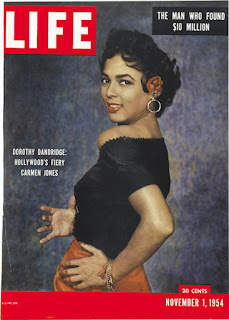 After 1954's CARMEN JONES, there was no other leading role work in Hollywood for Dorothy until another musical drama directed by Otto Preminger came along.  That was the 1959 lushly orchestrated screen adaptation of PORGY AND BESS.  Her leading man was Sidney Poitier.  Brock Peters, Diahann Carroll, Pearl Bailey and Sammy Davis, Jr.  joined Dorothy Dandridge in what would be her last significant film.  She was in the 1957 glossy Cinemascope drama ISLAND IN THE SUN.  That was shot on location.  Dorothy, in a supporting role, displayed her glamour and charisma again in this race drama.  Harry Belafonte co-starred.  Not as Dandridge's love interest but as the handsome social activist that Joan Fontaine's character romances.  James Mason starred as a rich racist in this Caribbean story.  Dandridge played a clerk who's romanced by the white aide to the Governor.  Reportedly, Oscar-winning actress Joan Fontaine got hate mail for playing a woman having an interracial romance.

I've seen the 1959 PORGY AND BESS a few times.  It's Dorothy Dandridge's picture.  Her Oscar nomination for CARMEN JONES was no fluke.  She was a screen beauty with solid acting skills. 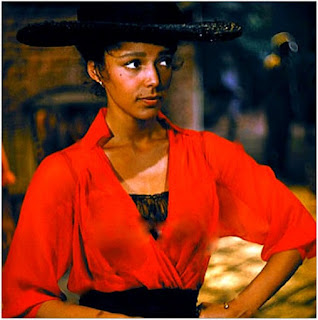 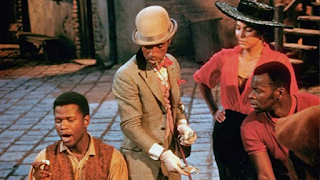 Dandridge was captivating as Bess.  She and Sidney Poitier should've been re-teamed on film. 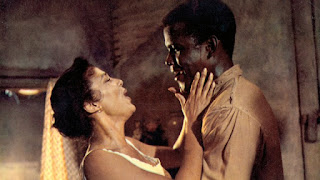 Hollywood was not racially inclusive then.  Neither was a lot of the country.  Racial restrictions clearly handicapped the career of this multi-talented performer.  When talking about fellow black entertainers, Lena Horne said that Dorothy Dandridge was "...our Marilyn Monroe."  The gifted Best Actress Oscar nominee died broke in West Hollywood in 1965.  She was only 42.