We made it through that grueling, extreme stress test called 2020. I'm positive I am not the only person who watched Vincente Minnelli's 1944 classic original movie musical, MEET ME IN ST. LOUIS, and wept when Judy Garland sang the poignant "Have Yourself A Merry Little Christmas." Garland, playing Esther Smith, was the star of the film that introduced us to the Smith Family. We see the family over one year the lead into the St. Louis World's Fair of 1904. Of the five children in the family, child actress Margaret O'Brien played the youngest one. She was called Tootie and O'Brien stole every scene that included her. Tootie is a feisty and lovable youngster. 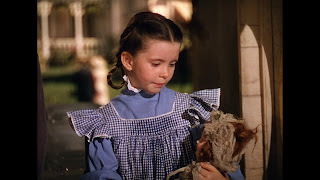 To me, Vincente Minnelli was a close to being a Civil Rights activist in the MGM stable of film directors that one could hope to find. He presented Black actors in respectable roles that wouldn't make Black moviegoers cringe when watching them onscreen. His directorial debut was making the 1943 film version of the Broadway musical comedy hit, CABIN IN THE SKY. His all-Black cast was headed by Ethel Waters, recreating her Broadway role, Eddie "Rochester" Anderson and Lena Horne. His World War 2 love story, THE CLOCK, starred Garland (then Mrs. Vincente Minnelli) is her first dramatic. Especially in the film's final scene, we see a crowded Grand Central Station with relatives saying goodbye to their men in uniform. Unlike other Hollywood studio films made during the war, Minnelli shows us several Black men in uniform. We also see a Black wife and mother bidding a farewell to her military husband -- and he's an officer. Seeing those Black GI's was so significant to be because they represented photos in our family scrapbook of my father when he served in WW2 and friends of family who also served. In my teen years, I saw Gene Kelly in a TV interview tell how Vincente Minnelli and held their ground and got their artistic way when they wanted dozens of Black background actors and the Nicholas Brothers in Minnelli's Judy Garland and Gene Kelly musical, 1948's THE PIRATE. They had to deal with MGM studio head Louis B. Mayer who, apparently, wasn't too keen on all that racial inclusion. But Minnelli and Kelly stressed that the story took place in a Caribbean village back in the days of pirates. Black people were plentiful in the Caribbean. There's a Black dancer in the "An American in Paris" ballet in Minnelli's Oscar winner for Best Picture of 1951, AN AMERICAN IN PARIS starring Gene Kelly and Leslie Caron. 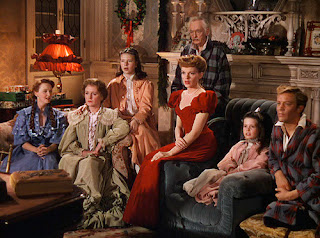 Esther hosts a summertime party at her house with her main goal being to get a kiss from "The Boy Next Door." Tootie, who should be in bed, sneaks downstairs to see the festivity. Esther brings her into the party. Her big brother, Lon, whispers into Tootie's ear. Tootie announces, "I can do the Cakewalk if Esther does it with me." Esther, of course, does and we see the two sisters do the Cakewalk in the charming "Under the Bamboo Tree" number.
The Cakewalk was a celebratory pre-Civil War dance created and originated by plantation slaves. It's from Black American culture. Eventually it made its way in the entertainment field. It was performed in vaudeville by Caucasian and Black performers such as Bert Williams. The dance grew so in popularity that New York City hosted a Grand Cakewalk event in 1892. In 1903, the Cake Walk was filmed with Black dancers performing it. Tootie has an awareness of Black culture and her family obviously knows it.
Near the end of the film comes the touching "Have Yourself A Merry Little Christmas." There's heartbreak in the family when the lawyer dad announced he's being transferred to New York City and the family has to move a few days after Christmas. Esther has just becoming engage to the boy next door. Little Tootie's whole world is in St. Louis. She doesn't want to move. She doesn't want to leave all her toys and her friends. 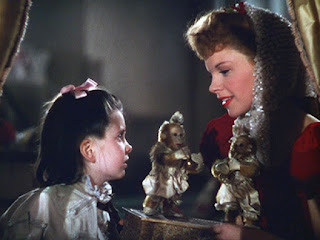 Esther enters Tootie's room a few minutes into Christmas morning. Tootie, crying, sits at her window looking for Santa Claus and wondering if he'll be able to find her in New York City the next year. Esther sits to comfort her little sister. As Esther enters the room and removes her coat, look at the lower left hand corner of the frame. Tootie has a Black female doll that's very visible. The doll is not dressed as a mammy or a pickaninny. She's in a nice dress.
That often-overlooked, tiny detail makes me smile. That, and Tootie's love of the Cakewalk, tell me something good about the girl. And they're more examples of Vincente Minnelli's respect for Black culture and Black images on film.