On ESCAPE TO THE CHATEAU

I discovered this documentary series about a year and a half ago on TPT, the Twin Cities PBS station. It immediately became weekend viewing for me because it's so entertaining, pleasant and soothing. It's called ESCAPE TO THE CHATEAU and gives you something fresh and new in the field of home renovation show. The show focuses on Dick Strawbridge and his wife, Angel. These two make marriage look fun -- just like the Stanley Tucci and Meryl Streep characters did in JULIE & JULIA, the Nora Ephron comedy biopic about PBS TV chef Julia Child. Dick, a former military man, looks like and has the sweet spirit of a Santa Claus. He loves to repair things, grow things in a garden, and cook. More than anything, he loves Angel who has a bit of a resemblance in look and style to Bette Midler in the 1970s before she made THE ROSE. Dick and Angel have two adorable little kids. 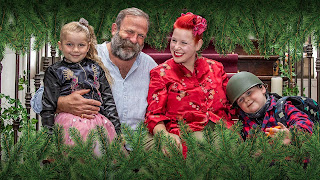 The British couple purchased a worn-down 19th century French chateau with plans to restore and renovate its many rooms. They'll live in it and be able to rent it out for weddings and such. It's a big, big chore but Angel's decorating ideas are truly bright and whimsical. Dick's very handy around the place and appears to be a great cook and gardener. The warmth of this married couple really lights up this fun show.

ESCAPE TO THE CHATEAU with Dick and Angel is like a good glass of wine on the weekend while your relaxing. Check for this British import on your local PBS station or HGTV.