Actress Kim Cattrall became more popular than ever in her extensive career when she played lusty Samantha on HBO's hit series, SEX AND THECITY. Whether we baby boomers realize or not, we've been Kim Cattrall fans for a long time. It's not mentioned much today, but remember what a big hit the raunchy teen comedy, PORKY'S, was back in 1981? She was in that as Coach Honeywell, the lady who made sounds like Lassie when she was making love. She also starred in 1987's MANNEQUIN as the store mannequin come to life. We played the music video for MANNEQUIN on VH1. After a lot of film and TV work, the role of Samantha Jones in SEX AND THE CITY came her way -- and she made the role her own when the series premiered in 1998. Two feature films were spun off from the series which ended in 2004. Recently, entertainment news reported that Sarah Jessica Parker will return as Carrie in a reboot with her two co-stars. Not three. Cynthia Nixon and Kristin Davis have signed on to reprise their roles in the reboot that will focus on the characters now in their 50s. Kim Cattrall is not in the reboot.. Of course, there was online speculation as to whether of not she got along with her former cast members. Well, my opinion is that Kim Cattrall outgrew the role of Samantha Jones. 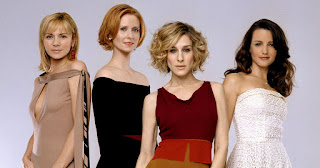 In 2014, Kim Cattrall starred on a series for HBO Canada. It should've aired here in the U.S. too for it showed Cattrall slamming across some of the best acting of her career. She played a more dimensional character in a witty, wise and mature series. It was called SENSITIVE SKIN. 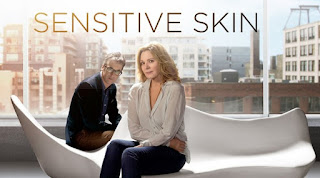 Cattrall played Davina, a 50 year old former model who is a wife and mother. She and her husband have a grown son. Davina is dealing with the changes, humiliations and revelations of middle-age. She deals with her bodily changes, her fractured relationship with her sister (played terrifically by Joanna Gleason) her husband's writing career and his being the recent victim of a street crime, and her hospital-bound mother. There's humor in the episodes but it never eclipses the dramatic situations. I'm a gay man and it seemed that, for my community, watching SEX AND THE CITY every week was the law. And I lived in the Chelsea section of New York City which was like West Hollywood on the Hudson. But I didn't watch every week. For one thing, I constantly wondered if the four female friends had relatives. We never saw siblings, aunts or uncles, mothers or fathers. And did they have friends of color in the extremely racially diverse New York City? SENSITIVE SKIN is pleasantly different. By the time you get to the third episode, called THE THREE SISTERS, you see that it's more complex and, for an actress, more of a challenge that SEX AND THE CITY. Cattrall met that challenge with flying colors. She gave an Emmy and Golden Globe nomination worthy performance. Here's a trailer for the show that you can now stream on Acorn TV with Amazon Prime video channels.
SENSITIVE SKIN concluded in 2016. Since then, Kim Cattrall has moved on to play America's first female President of the United States in the dramatic TV series, MODUS, seen on PBS stations.
With the acting depth and intelligence Kim Cattrall displayed in SENSITIVE SKIN and MODUS, going back to play oversexed Samantha Jones on SEX AND THE CITY would be like asking Sally Field to consider starring in a reboot of GIDGET after her performance in Spielberg's LINCOLN brought her a third Oscar nomination. That's my opinion.