If you have Netflix, I've got a treat for your eyes. A 1955 Italian comedy starring a new actress named Sophia Loren. I'll tell you right now, she is absolutely luscious in this movie. In her stellar film career, she did some of her best work -- some of her most memorable work -- under the guidance of master director Vittorio De Sica. He directed her in the wartime drama, TWO WOMEN, which got her the Oscar for Best Actress of 1960. He also directed her in YESTERDAY, TODAY AND TOMORROW, which has her famous stockings striptease for Marcello Mastroianni, and MARRIAGE ITALIAN STYLE. Plus De Sica directed the classics BICYCLE THIEVES (1948), UMBERTO D. (1952) and THE GARDEN OF THE FINZI-CONTINIS (1970). Hard to believe that Vittorio De Sica never received an Oscar nomination for Best Director with those classics to his credit. In addition to directing, Vittorio De Sica was a good actor. In fact, the one Oscar nomination he did get was in the Best Supporting Actor category for the remake of A FAREWELL TO ARMS (1957).

Vittorio De Sica acted opposite Sophia Loren. One of their pairings highlights the 1955 subtitled comedy, SCANDAL IN SORRENTO. After 30 years of military service, a man returns to his hometown to find that a young widow who sells fish in the village now lives in his house and doesn't want to leave. His brother is a Father. He's a priest who refers to the young woman as "that coquette." The priest arranges for his brother, the Marshall (De Sica), to stay in the home of a prim, proper, obsessively neat and extremely Catholic woman. The priest orders his brother not to flirt -- because he's too old. 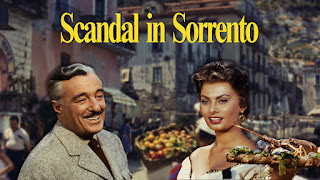 The young widow who sells seafood is, of course, played by Sophia Loren. The moment you see her for the first time as she calls out "Fresh fish!," you go "Wow." No one ever looked that gorgeous wearing a simple dress and holding a basket of fish. No one. This is Sophia five years into her film career. Her character, named Sofia, is beautiful, manipulative, street smart, independent, lively and lovable. When she meets the dashing and debonair Marshall, he falls for her immediately. She flirts with him to keep from being evicted. That causes a town scandal. She uses her beauty and smarts to stay in the house and get a local suitor a job. He's a young fellow who loves Sofia, but the lovely widow seafood seller is her own woman who says "No one can rule me." Because she plans to get what she wants from the Marshall, she hides her affection for the local suitor. 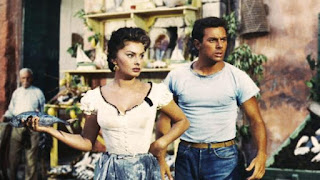 This is a merry little romp that runs about 90 minutes and shows that, early in her film career, Sophia Loren had a charisma and star quality that illuminated the screen. Stardom was inevitable. The camera loved her. And she could act. She and Vittorio De Sica have definite chemistry. He had the gift for playing screen comedy. A highlight of the movie is when the Marshall and Sofia go out on a date and do the Mambo. To get a glimpse of Loren's gorgeousness in this comedy, here's a short clip,
Sofia has a little buddy named Titino. He was played by the kid actor Gaetano Autiero.  If the little boy actor sounds familiar, he also played Mauro, the little Italian buddy to Katharine Hepburn's tourist character, in David Lean's SUMMERTIME (1955). Directed by Dino Risi, SCANDAL IN SORRENTO is subtitled in English and currently on Netflix.