Watching this new feature was like spending 1 hour and 40 minutes with a fabulous longtime friend who talked openly about everything -- work, art, love, sex, marriage, family, fears and Faye Dunaway. 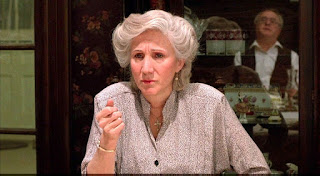 "Your life is going down the toilet." That is one of the memorable lines Olympia Dukakis says to Cher in the 1987 romantic comedy, MOONSTRUCK, directed by Norman Jewison. Cher won the Oscar for Best Actress. Olympia Dukakis won the Oscar for Best Supporting Actress. Not long after Olympia won her Oscar, I had the first of two wonderful on-camera experiences with her. She was an earthy, funny, generous guest on my old VH1 talk show. Earthy because she was the first celebrity guest to say the word "shit" in an answer to an interview question, funny in telling us how much a Grateful Dead fan she was, and generous in that she treated me like I was Dick Cavett on his celebrated ABC talk show. Our young studio crew loved her. She loved talking about her Montclair, New Jersey theater company and she was one of the first celebrities to send me a thank-you note after our interview. The next experience I had with her was about 2005 at New York City's LGBTQ Center on W. 13th Street. She was onstage for one of its guest speaker nights and I, fortunately, was asked to be the interviewer. She hadn't changed. She was just as honest and charismatic and lovable as when I'd interviewed her on VH1. In our second interview, the audience learned that she was a background actor in several scenes of LILITH, a 1964 psychological drama starring Warren Beatty. The audience also learned that like Beah Richards opposite Sidney Poitier in GUESS WHO'S COMING TO DINNER (1967), Angela Lansbury opposite Laurence Harvey in THE MANCHURIAN CANDIDATE (1962), and Beulah Bondi opposite Thomas Mitchell in MAKE WAY FOR TOMORROW (1937), she's one of those actresses who played the mother opposite an actor even though they were in the same age category. She played the mother to Dustin Hoffman's character in 1969's JOHN AND MARY. She was only six years older than Hoffman. The crowd also learned that she got her Oscar-winning mother role in MOONSTRUCK after director Norman Jewison noticed her in a Broadway comedy called SOCIAL SECURITY that starred Marlo Thomas. 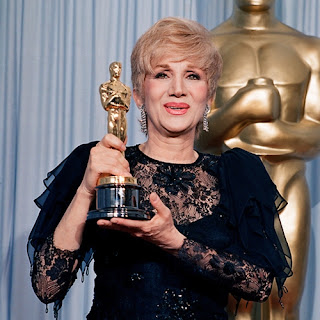 The info about Jewison's discovery of her -- and footage of Jewison with Olympia -- are in a new production that each and every Olympia Dukakis fan should see. The gifted actress, fierce feminist and proud Greek is the focus of a wonderful documentary called OLYMPIA, smoothly directed and produced by Harry Mavromichalis. Every quality I loved about her in person and onscreen is in this entertaining, revealing and educational documentary. We get the real Olympia Dukakis, in all her glorious honesty, in a fascinating feature that takes us from California to New York to Greece. The actress has millions of fans who cherish her movie performances in MOONSTRUCK and 1989's STEEL MAGNOLIAS. 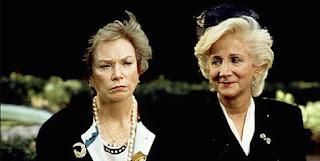 There's also her groundbreaking lead role as the transgender Anna Madrigal in the 1993 TV series adaptation of Armistead Maupin's TALES OF THE CITY novels. She was amazing in the 2019 closing chapter that I saw on Netflix.

The documentary shows us that the candid and totally cool Olympia Dukakis had a more extensive career that we realized. Onstage, she wowed audiences and fellow actors with her performances in great plays such as THREE SISTERS, LONG DAY'S JOURNEY INTO NIGHT, THE SEAGULL, THE CHERRY ORCHARD, THE ROSE TATTOO, WHO'S AFRAID OF VIRGINIA WOOLF? and MOTHER COURAGE. The documentary is rich with archive photos, home movies, amateur footage and clips from her films. We hear from fellow actors Laura Linney, Whoopi Goldberg, Diane Ladd and Lainie Kazan. (For you young gay readers, Lainie Kazan was Barbra Streisand's understudy on Broadway in FUNNY GIRL). We see and hear from her actor husband, Lou Zorich, her children, and her cousin Michael Dukakis, the former Democratic presidential candidate.

We see Olympia Dukakis at age 80 in this feature. She seems hipper and wiser than folks half that age. As the doc opens, she's on the phone talking about an offer to do an East Coast stage play. When she hears what the pay is, she tickles you with her droll response "You wonder why actors flee to Hollywood." Her childhood fueled her "rebellious, independent" spirit. She broke through the limiting margins of 1950s social expectations placed on women. She defied her Greek mother -- and ultimately made her proud. Olympia Dukakis was her own woman occupationally, intellectually and sexually. Before she dated and fell in love with Lou Zorich, she described herself as "...the queen of one-night stands" and goes on to explain her reasons for her sexual independence.

Seeing Olympia Dukakis interact with fellow actors, family, friends and even strangers in Greece is pure gold. She is wise and also very witty. There's footage of her in a hotel room getting ready for the Oscars the night she won. Her banter about Faye Dunaway and cosmetic tape broke me up. I also howled with laughter at her trying to get an answer from Siri on her cellphone to a geographical question. Siri worked Olympia's last good nerve. Another sweet highlight is footage of her as the celebrity grand marshal one year at the San Francisco Gay Pride parade. While there in San Francisco, she gets a surprise visit from TALES OF THE CITY author, Armistead Maupin.

Dukakis' marriage to Lou Zorich looks like it was absolute fun. They were married from 1962 to his passing in 2018. If you see OLYMPIA and keep thinking he looks familiar as you watch, he played the dad to Paul Reiser's character on the NBC sitcom, MAD ABOUT YOU.

There's not one dull, dishonest moment in OLYMPIA. Thank you, director Harry Mavromichalis. You made me fall in love with the unique, authentic Olympia Dukakis all over again. And I agree with what Ed Asner says in your captivating documentary. She's a "magnificent actress."

One more thing -- that "You're life is going down the toilet"  line from MOONSTRUCK? Olympia improvised it. OLYMPIA will be available on demand come March 23rd. I'll definitely be watching it again. To see a trailer and read other info about it, click onto this website: