I have chatted with her on the phone, interviewed her on national TV, dined with her and -- of course -- purchased and read her books. I can tell you from personal experience that Fran Lebowitz is genuine, candid, whip-smart, hysterically funny...and a former New York City cabdriver. There's a new documentary series on Netflix and a half-hour with Fran Lebowitz is currently airing. It's called PRETEND IT'S a CITY. Press releases will tell you it's a documentary written and directed by Martin Scorsese. I will tell you that it's mostly Fran Lebowitz talking and taking questions from Scorsese plus a few audience members. She talks about what she loves and doesn't love about New York City. The feature opens with a clip of the 20th Century Fox symphony orchestra, conducted by Alfred Newman, playing his "Street Scene" composition used as a prologue to the 1953 Fox comedy, HOW TO MARRY A MILLIONAIRE. This works perfectly for the first images we see of Fran. She's walking through the streets of Manhattan and giving us commentary in voiceover. 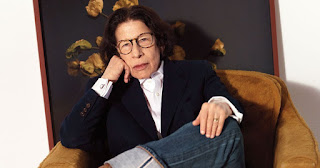 "No one can afford to live in New York. Yet, somehow, 8 million people do." When she said that, I howled with laughter at the truth of it. I lived in New York for 25 years and I miss it so much that I almost ache. The Great Recession left me flat broke and forced me to leave New York and live like a gypsy for a few years. I lived in different cities, with different friends and a relative, while I sought new employment. I've taken occasional trips back to NYC for a few short-term gigs. I've been living with my sister in the Minneapolis/St. Paul area for a couple of years now. What I would not give for a busload of New York Puerto Ricans and a nearby Chinese restaurant. This city has the whitest people I've ever seen in my life. I do not mean that in a snarky sense. I'm talking about actual skin tone. Many Minnesotans have a complexion that matches your standard Kleenex tissue. Ice fishing is as popular here as Fashion Week is back in New York. So, when Fran talks about New York City, let's just say that I thoroughly loved PRETEND IT'S a CITY. Her riffs on subway behavior, Broadway shows, parts of Times Square now resembling a food court in a shopping mall with chairs and little tables... it's all accurate without being mean. She may seem sardonic. She may be critical, but there's always been an underlying warmth and humor about her. She may get irritated with tourists asking her for directions when she's alone on a city sidewalk, but she'll give them the directions. Fran Lebowitz represents the qualities about New York that I loved and still love. The qualities and the frustrations.

About living here in the Twin Cities: The zeal New Yorkers have for Broadway, Minnesotans have a similar zeal for their annual State Fair. Two years ago, one of the local network affiliates did its weekday evening newscasts live from State Fair all week. In one show, a young lady was crowned a queen of the fair. One of her prizes was to see her likeness carved into a 50-pound block of cheese. The sculptor would do the carving during the broadcast. Near the end of the newscast, the finished product was unveiled and the young lady broke into tears of happiness on live TV.

I thought to myself, "Dear Lord, please get me back to New York. Don't let me wind up one day openly weeping with joy because I've seen my likeness carved into a 50-pound block of Minnesota cheese."

For a funny half-hour with Fran Lebowitz, go to Netflix and watch PRETENDS IT'S a CITY. It's the first of 7 episodes featuring Fran in this limited series.