About WHAT WOULD SOPHIA LOREN DO?

This documentary is a little 30-minute gem on Netflix. Basically, it's a longtime, ardent Sophia Loren fan in New Jersey talking about her love for the work of actress Sophia Loren. But it's a surprisingly touching half-hour. As she describes scenes we see from classic Sophia Loren foreign films, this lady in New Jersey, the daughter of Italian immigrants, illuminates in plain words why we love movies and certain movie stars. Loren's work and life reflected joys and sorrows in the New Jersey fan's own life. Her explanation of scenes may not sound sophisticated like the reviews of film critics on national TV, but you know exactly what she means and you connect to her words. You understand why she loves the legendary star. There were times in the lady's life when she was faced with having to make a decision in a certain situation. She would think to herself something that became the title of this documentary -- WHAT WOULD SOPHIA LOREN DO? 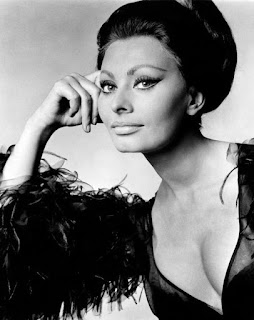 I've written before that loving Sophia Loren in our household was practically a law. I was born on September 20th, the same day as Loren. Mom blissfully reminded me of that on every birthday. We saw her movies at the drive-in. I have the sweet memory of sitting in the backseat of the family Plymouth and hearing my parents in the front seat laugh with delight at the Italian star doing a personal striptease for Marcello Mastroianni in YESTERDAY, TODAY AND TOMORROW. Before that, we went to the drive-in movies one night to see her in EL CID, a historical epic co-starring Charlton Heston. Yes, I acquired the love for Loren from my parents in South Central Los Angeles. Sophia Loren took to bed for 8 months because she'd had trouble maintaining a pregnancy and she was determined to be a mother. Before we went to Sunday mass at Mother of Sorrows one morning, our Black Catholic mother said, "When we get to church, we're lighting a novena candle and praying that Sophia Loren can have a baby." I am not kidding. Our novena prayers must have worked because Sophia Loren and her great love, producer Carlo Ponti, became the parents of two children. 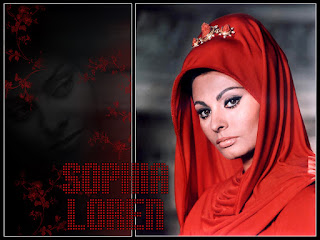 Nowadays when I read newspaper and magazine film reviews -- especially on Twitter -- I wonder if the critics are writing to bring people into the art of film or if the predominantly Caucasian critics are writing for other Caucasian critics. It seems as though some are writing to show off their film intellectualism to impress other members in their film critics circle. New Jersey wife and grandmother Nancy Kulik speaks in everyday language, simple and direct. It's earthy -- like characters Sophia Loren played. It's refreshing. Ordinary language can have extraordinary depth.

We learn about Nancy Kulik's immigrant Italian parents, her occupational life, her marriage and her children. Her comments on motherhood in clips from De Sica's TWO WOMEN (1961), the war drama that brought Loren the Oscar for Best Actress, are simple yet wise.  The documentary has clips of classic Loren films and footage of her first screen test. Loren was from a poor post-war family. She had a devoted mother and an irresponsible father. Loren won a beauty contest that led to her screen test. For her, beauty was a Heaven-given gift she utilized to gain employment. At age 15, as you'll see in her screen test, she had the gorgeousness and poise of a 21-year old woman. There's also behind-the-scenes footage of her being directed by her son, Edoardo Ponti, in her new film currently on Netflix. The film is THE LIFE AHEAD -- a film I highly recommend. There's also current interview footage of Sophia Loren, archive clips of her on the Dick Cavett show, and a clip of her being interviewed by her son, Edoardo. Sophia Loren still emits that strong, golden force field of star quality. There's juicy stuff in those clips. The final scene of this half-hour documentary will give your heart wings. I loved it. Here's a trailer for WHAT WOULD SOPHIA LOREN DO?