The legendary Billie Holiday, also known as "Lady Day." She was one of the most original and moving voices in jazz.  For decades, when folks thought of Billie Holiday, they thought of her as a uniquely talented but doomed female artist. She was jailed for drugs. Her untimely death at age 44 came when she was drinking too much and in an abusive marriage. 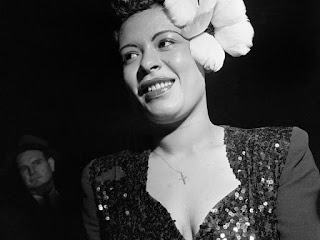 However, BILLIE, a documentary that I wrote about last year in November, gave us a different look at Billie Holiday. It presented her as a gifted, smart artist who was the master of her own fate. She liked to get high. She was sexually fluid. She was serious about her craft, one that took her from tours throughout the U.S. to tour dates in Europe. Most importantly, it showed us that she truly was a Civil Rights activist with her performance of "Strange Fruit," a late 1930s protest song that slapped White America hard because of its racist history. Black men were still being lynched in the South. In that documentary, you get the feeling that White men in the U.S. government were determined to make Billie Holiday do jail time, not really for drugs, but as punishment for her Black power with "Strange Fruit." Here's the trailer for BILLIE.
BILLIE can be streamed on Amazon Prime and YouTube.
Motown star Diana Ross left The Supremes after several hit records with the girl group and made her film acting debut as Billie Holiday in 1972's LADY SINGS THE BLUES. The biopic was a box office and critical hit -- especially for Diana Ross. It brought her an Oscar nomination for Best Actress.

Now director Lee Daniels (PRECIOUS and Lee Daniels' THE BUTLER) brings Lady Day back to the big screen. His new film, opening in February, is THE UNITED STATES vs. BILLIE HOLIDAY. Singer Andra Day makes her on-camera film debut as Billie Holiday. To see a trailer with Andra Day as Lady Day, click onto the link:
https://youtu.be/S5kZY80E_0M.
I am very eager to see THE UNITED STATES vs. BILLIE HOLIDAY. It's a Hulu film and opens February 26th. The cast includes Trevante Rhodes, seen as the adult Chiron in MOONLIGHT, Evan Ross, son of singer/actress Diana Ross, and Natasha Lyonne. She plays Broadway star Tallulah Bankhead.