I loved her work, her humor and her spirit.  When she went after the lead role in MGM's first-rate adaptation of the hit Broadway musical comedy THE UNSINKABLE MOLLY BROWN, the casting of Debbie Reynolds turned out to be the perfect marriage of performer and material.  She was "unsinkable."  Debbie Reynolds was a walking lesson in perseverance.

I still give thanks for being hired by VH1 in the late 80s.  I loved every single work day during my three years.  That's where a dream came true for me.  I got to host an entertainment talk show.  And a pretty good one, if I say so myself.  I have so many great memories of that time.   Two days at the top of those memories are the days Carrie Fisher came to be a guest and the day her mother, Debbie Reynolds, came to be a guest.  I loved them.  The crew loved them.  Both Carrie and Debbie stuck around afterwards, posed for photos and gave autographs.  They were genuine and generous with their time.  And extremely funny. 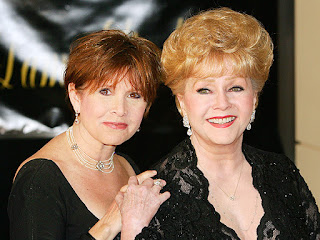 By the early 1990s, I began to feel that, although they were very famous movie actresses, Hollywood never quite showed its appreciation for their hard work and their multi-talents.  Carrie could've just coasted on STARS WARS fame.  The original trilogy of STAR WARS adventures made her a pop culture icon and internationally famous.  But she proved to be a terrific writer, sort of the Oscar Levant of Baby Boomers.  She wrote best-selling novels and hysterically funny memoirs. She adapted her first book, the novel POSTCARDS FROM THE EDGE, into a screenplay that Mike Nichols directed.  Carrie's screenplay brought Meryl Streep another Best Actress Oscar nomination.  Her wise, witty and highly quotable screenplay was practically an original story.  Read the novel.  The movie star mother is in less than ten pages of the book.  She's a minor character in the novel.  However, the screenplay is all about the relationship between the fresh out-of-rehab actress daughter and her former queen of Hollywood musicals mother.  Carrie should have been an Oscar nominee for Best Adapted Screenplay.  She wrote a great script for Meryl Streep and Shirley MacLaine. 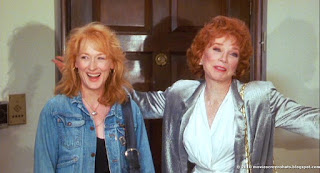 The celebrated staircase argument scene between Suzanne Vale and her mother, Doris Mann in which Doris bellows "It twirled up!" isn't in the book at all.  Carrie gave us fresh material in her screenplay. 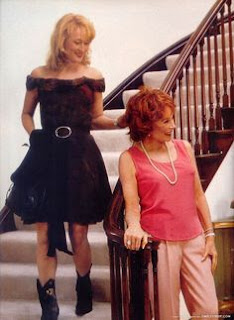 And did Carrie Fisher ever get a star on the Hollywood Walk of Fame in her lifetime? 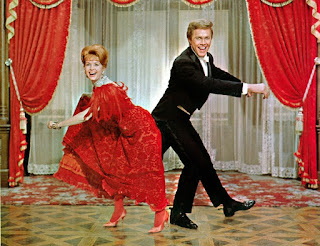 As for Debbie, I wish Hollywood had given her the same regard for her acting skills that it gave Oscar winner and 5-time Oscar nominee, Shirley MacLaine.  Debbie was a Best Actress Oscar nominee for 1964's THE UNSINKABLE MOLLY BROWN.  She should have been in that category again for 1996's MOTHER, the sharp and insightful comedy written by, directed by and co-starring Albert Brooks.  Debbie was on top of her game in this character comedy role.
For decades, Debbie Reynolds was a tireless entertainer who loved Hollywood and worked hard to help preserve its history.  But Hollywood didn't seem to care about giving her a financial hand to help preserve that history.  And Hollywood seemed to think of her mainly as that cute star from a couple of A-list movie musicals. It overlooked the solid non-musical work she did in films like THE CATERED AFFAIR, THE RAT RACE, DIVORCE AMERICAN STYLE and WHAT'S THE MATTER WITH HELEN?  When The Academy finally did get a clue and bestow her with an honorary Oscar in 2015, the SINGIN' IN THE RAIN star was ill and unable to attend to ceremony. 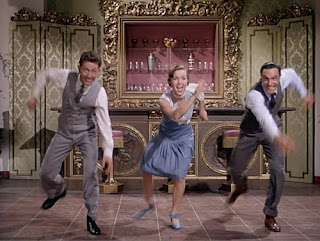 The mother-daughter bond that Debbie Reynolds and Carrie Fisher had was the stuff of a classic tearjerker movie like TERMS OF ENDEARMENT.

Think about this:  If someone made a movie about a sometimes fractured, mostly loving mother-daughter relationship  -- both actressess -- that was so deep and so devoted that when the daughter unexpectedly dies in the last act, the mother unexpectedly dies the next day, critics would have roasted it.  They would have written that it was totally implausible and unbelievably sentimental.  But it happened in real life.  In real Hollywood life.  The Carrie Fisher and Debbie Reynolds love and deaths are now the stuff of Hollywood legend. 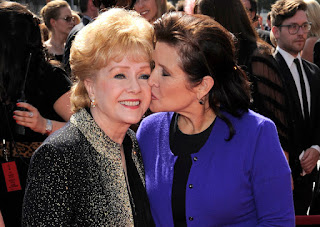 The joint memorial for Debbie Reynolds and Carrie Fisher will be held at 1pm Pacific Time on Saturday, March 25th, at Forest Lawn Memorial Park Hollywood Hills in Los Angeles.  According to The Los Angeles Times, the memorial will be live-streamed on DebbieReynolds.com.