Good For You, Gabourey Sidibe!

She's got an Oscar nomination to her credit.  She's in the cast of a hot, hit TV series.  She has a new look and a new book.  Work it, Gabourey Sidibe! 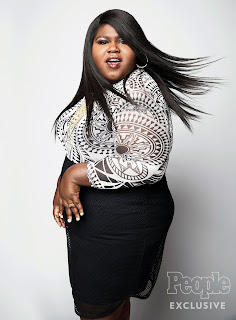 She deserved that Best Actress Oscar nomination for PRECIOUS.  Did you see that 2009 indie drama?  We go back to Harlem in the 1980s.  Gabourey Sidibe plays the overweight, unloved high school student called "Precious."  She lives on welfare with her monster of a single mother who is physically and verbally abusive.  Precious is 16 and illiterate.  She's has a special needs child.  The child was result of a rape.  Precious has turned into herself because she's been discarded by life. Things change when a high school teacher goes in to pull Precious out a bit.  She teaches her to read and write.  Director and screenwriter Lee Daniels discovered Gabourey Sidibe for the role. 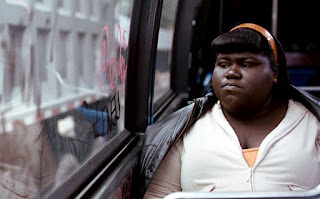 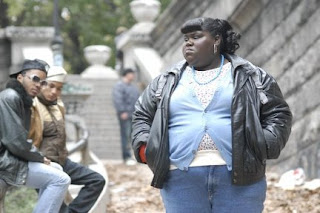 Click on this link to see a short trailer:
https://youtu.be/06ZF3zw1gHs.

Mariah Carey, without cosmetics, played a counselor.  Mo'Nique won the Best Supporting Actress Oscar for her raw work as the abusive mother. 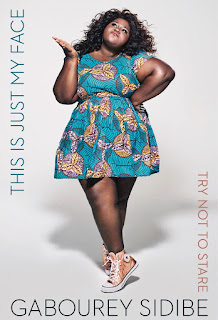 PEOPLE Magazine reports that Gabourey Sidibe, a Brooklyn native, has a memoir hitting bookstores this May.  Sidibe wrote about her weight loss surgery and the change in her eating habits that came about after she was diagnosed with Type 2 diabetes.

Sidibe is now seen on EMPIRE, the hit TV series on Fox. It was created by Lee Daniels and has starred four African American cast members who were Oscar nominees.  Gabourey was nominated for PRECIOUS, lead actor Terrence Howard was a Best Actor Oscar nominee for HUSTLE & FLOW (2005), lead actress Taraji P. Henson was a Best Supporting Actress Oscar nominee for THE CURIOUS CASE OF BENJAMIN BUTTON (2008) and Jennifer Hudson won the Best Supporting Actress Oscar for DREAMGIRLS (2006).

When her PRECIOUS performance put her on the red carpet at film awards shows, I saw her looking glamorous and doing a short guest spot on the E! Entertainment Television show, THE SOUP.  Her sophisticated wisecracking banter with host Joel McHale was comedy gold.  You could hear the crew laughing.  Hollywood studios didn't pick up on that.  Her big studio release following her Oscar nomination supplied a paycheck but role didn't really match her talents.  She was a hotel maid in a crime caper movie called TOWER HEIST (2011).  Like some other black and Latina actresses in the past who got Oscar nominations for fine film work, Hollywood didn't stuff didn't seem to stuff her mailbox with other good offers after her Oscar nomination either.  So she turned to TV.

There was one indie drama that gave Gabourey Sibide a supporting role and, in that role, she is terrific.  If you've seen PRECIOUS,  it gives you proof of her range as an actress.

The movie is a juicy little mystery directed by Gregg Araki.  He also adapted the screenplay.  This 2014 film is called WHITE BIRD IN A BLIZZARD.  Just like the movie PRECIOUS, we go back to the 1980s to see a high school teen's complicated life.  Shailene Woodley plays Kat Connors.  She's trying to get through high school, she's awkwardly trying to deal with her blossoming sexuality and her lovable, dorky dad is constantly getting brow-beaten by her tense mother.  Kat loves her dad.  Kat is attracted to the boy next door.  Kat's mom is also attracted to the boy next door.  Then the mother ups and disappears one day.  Kat and her dad get a detective on the case.

Kat has high school friends she can talk to and that she does.  Gabourey Sidibe plays the smart, supportive, outgoing and charismatic Beth.  The actress gives Beth a bit of an 80s "Valley Girl" suburban vibe that works well for the character.  Look at how Sidibe played another 1980s high school student, one at the other end of the scale in comparison to PRECIOUS.  Here's a trailer.
Shailene Woodley is now on the HBO series, BIG LITTLE LIES.  If  you're a Chris Meloni fan, WHITE BIRD IN A BLIZZARD is a must-see.  He's at his best as the ordinary, unassuming, domesticated suburban dad.  That's the opposite of the way we usually see the big, brawny actor.  And Gabourey Sidibe, in a small but colorful role, displays her versatility as an actress.