On BEST WORST THING THAT EVER COULD HAVE HAPPENED

Do you love Broadway theater?  Do you love the genius of Stephen Sondheim?  Are you aware that, as Stephen Sondheim wrote in the song "Putting It Together" from SUNDAY IN THE PARK WITH GEORGE, "art isn't easy"?  If so, you need to see a documentary called BEST WORST THING THAT EVER COULD HAVE HAPPENED.  Be prepared for a few tears to roll down your face during the last part of this moving, mature documentary about the casting, the opening night, the flop, the two decades that rolled by and then the revival concert show of Sondheim's MERRILY WE ROLL ALONG.  We see the original 1981 cast from auditions to casting to rehearsals.  They were new Broadway hopefuls cast to do a play that shifted in time.  We met the disappointed characters in middle age and the action take us back to when they were happy young graduates eager to start a new life and seek a career. 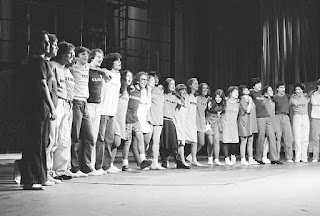 This documentary also becomes a look at the dreams of youth, the disappointing realities of life, and the opportunity in middle age or senior years to return to the place where those dreams began.  We see Broadway actors and, in the case of Stephen Sondheim and Hal Prince, Broadway legends.  But this documentary does not feel like it's about theatrical stardom.  It's more about passages of life and the different roads you may take when some of your dreams didn't come true.  If anything, it shows you that stardom can be a bit limiting.  One of the stage newbies, one of the unknowns in a cast of young unknowns in the original Broadway production, was Jason Alexander.  When I got to New York City in 1985, I knew that Jason Alexander was one of the most versatile stage actors in town.  After the flop of MERRILY WE ROLL ALONG, he went on to other shows, shows that were hits, and then came a TV sitcom.  Yes, SEINFELD.  That was a huge success on NBC for years and is now a classic.  But that sitcom didn't display all Jason Alexander's talents the way Broadway did.  But Hollywood probably only saw him as "George" from SEINFELD. 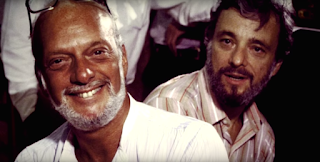 In the early 80s, Stephen Sondheim and Hal Prince were the golden boys of Broadway.  The buzz was that MERRILY WE ROLL ALONG would be another of their hits.  ABC news shot TV footage for a planned backstage special feature.  Those plans were scrapped when critics hated the Broadway show.  One of the original cast members was Lonny Price, now one of the most respected directors of Broadway plays.  He miraculously got possession of archive footage and put together this surprising, revealing and poignant documentary.  Price wears glasses in the pic with two other original cast members. 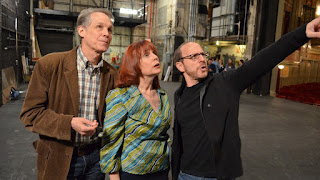 Take a look at this trailer for Lonny Price's fine documentary film.

21 years after the show's failure, it was done as a concert performance with the original cast reunited.  Not all the original cast members continued with New York City theatrical careers.  One, for a time, became flawed like the lead character she played.  All the people involved were transformed by the experience.  This documentary runs a trim 95 minutes.  I recommend it.  You can find BEST WORST THING THAT EVER COULD HAVE HAPPENED on Netflix. 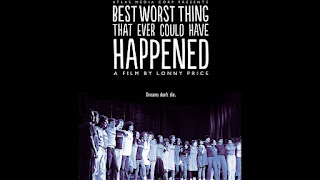 "We're opening doors, singing, 'Here we are!'..."  I had so many original Broadway cast albums in my youth.  MERRILY WE ROLL ALONG was one of them.  Yes, I cried during the last part of this documentary.  It touched me very much.