A Shot of HANNAH AND HER SISTERS

I still recall the joyful gasp in unison that came from the screening audience when I attended a preview of this Woody Allen film before I interviewed Barbara Hershey.  Back in those days, seeing the new Woody Allen before or soon after it opened was a hot trend for the sophisticated moviegoer.  HANNAH AND HER SISTERS was one of Woody Allen's best films and one of his most emotionally satisfying comedies even though some of the, shall we say, relative intermingling seemed the stuff of Tennessee Williams dramas.  HANNAH AND HER SISTERS is one of my favorite classics to watch around Thanksgiving because the story starts and ends on a Thanksgiving Day.  Mia Farrow plays Hannah, the oldest sister.  She's an actress and the dependable sibling her other two sisters count always count on for help.  Barbara Hershey and Dianne Wiest plays the other sisters.  This 1986 Woody Allen classic is now on Blu-Ray. 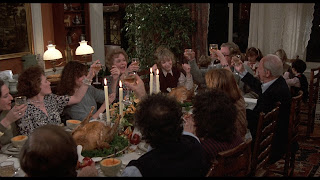 One of the most subtle shots in this movie makes me gasp for another reason.  I gasp at the sight of some extreme irresponsibility.  Look at the above photo.  The family is starting Thanksgiving dinner with a toast.  You see the Barbara Hershey to the left in between Dianne Wiest and Maureen O'Sullivan (Mia Farrow's real-life mother who plays the mother of the three sisters in the movie).  Notice that Lee (Barbara Hershey) is not holding a glass.

Note:  THERE'S A SPOILER COMING UP IF YOU HAVE NOT SEEN THIS FILM.

Michael Caine is excellent as the conflicted accountant who is married to Hannah.  Why is he conflicted?  Because he's attracted to his sister-in-law, Lee.  When he starts making his first movie, we learn that Lee attends Alcoholics Anonymous meetings.  That's probably why she doesn't have a glass in her hand in the above photo.  Lee tells Elliott, her brother-in-law, that she used to drink a lot.  She doesn't anymore but she goes to the meetings because she finds them comforting. 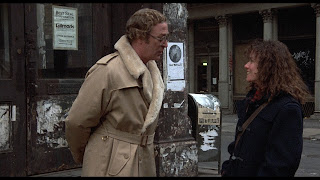 The two drift into an affair.  In one "chapter" of the comedy/drama, we see that Lee and Elliott are having a rendezvous at a deluxe hotel.  There's no dialogue in the sequence.  The two are slow dancing in the hotel room. 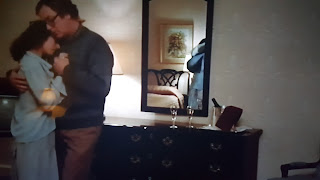 On a bureau behind them is a room service bucket holding a bottle of champagne.  There are two glasses on the bureau. 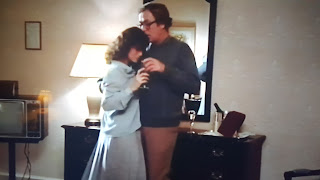 Elliott takes a glass and hands it to Lee. 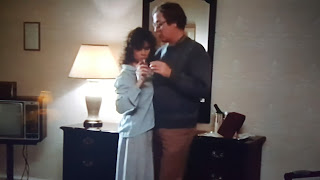 And she told Elliott early in the story that she attends A.A. meetings.