A Julie Andrews Gem on Netflix

Dame Julie Andrews is a human treasure, as far as I'm concerned.  I don't believe I'm alone in feeling that way.  She has an educational show for kids on Netflix that shines a spotlight on why the arts are so important.  JULIE'S GREENROOM is such a winner that I wished I had little children so I could share it with them.  I watched and loved the first three episodes of this bright show, a show that embraces diversity and inclusion while bringing youngsters into the world of the fine arts.  On the show, Andrews is joined by new puppet characters from the Henson Company and guest stars.  Julie Andrews has stretched her talents beyond singer, Oscar-winning actress, and dancer.  She's now also a director and an author of children's books.  She co-created and co-wrote JULIE'S GREENROOM with her daughter, writer Emma Walton Hamilton.  Andrews plays the head of a modest performing arts company, one that could really use some financial help.  Her little troupe members, the puppet characters, are called "greenies."  From Miss Julie, the greenies learn about the performing arts, the power of working together as a team and they learn discipline in a most gentle way. 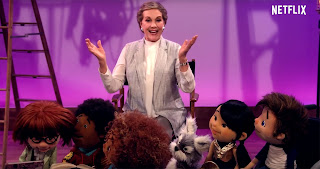 It's a smart and smartly-paced show for the pre-school and early elementary school group.  The puppets are not hyper.  There's no MTV-like quick editing to make the product seem hip.  It's relaxed and polite.  Basic theater terms and principles are taught, principles like "the show must go on."  Miss Julie's human assistant at the workshop is a charming young man named Gus.  Every episode has a special guest star visitor who teaches the troupe even more about the performing arts.  Besides the guests, there are short and very informative taped features about the arts.  The half hour show is well-produced and Julie Andrews is an endearing host who shares the spotlight.  Her warmth is magnetic.  By the way, she makes 80 seem like the new 60. 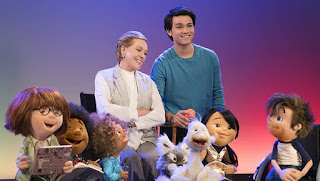 In the first episode, we are introduced to the greenroom.  We learn the purpose of a greenroom.  To start the greenies on their journey to discover "the magic of the performing arts," they all plan to do a version of THE WIZARD OF OZ.  But a serious plumbing crisis ruins their props and costumes.  Here's where we learn that "the show must go on."  THE WIZARD OF OZ business leads into the troupe meeting guest visitor, Idina Menzel.  She starred as the Wicked Witch on Broadway in WICKED.  Menzel teaches the little ones more about the arts.  Also, we learn about a performance arts company that Menzel started.

Julie Andrews sings a bit in the first episode.  That will definitely made you smile even more.  Chris Colfer, a star on the GLEE television series, visits in the second episode which focuses on writing.  I didn't know that Colfer was a published author.  Like Andrews, he's written children's books.  The greenies learn about William Shakespeare and they work together to write an original stage piece.  In their original story, there is an ogre.  The dramatic conflict is that the "ogre would steal all the arts."

This episode was completed quite some time before the recent news broke that Trump wants to cut all funding to the National Endowment for the Arts, PBS and National Public Radio.

The third episode is about singing.  We get voice lessons, we're taught the power of finding one's voice and individuality.  The special visitor is Josh Groban.  Wow.  Why hasn't he been cast in Disney movie musicals?  Such a great voice.

These are outstanding shows for kids.  I wish children's programming like this had a network home on Saturday mornings like shows I grew up watching.  Julie Andrews still has her magic and her excellent acting skills are on display.  Watch her with the greenies.  To her, they are not puppets.  They are youngsters.  She believes in them -- and that quality comes across.

If CBS still had an annual airing of 1939's THE WIZARD OF OZ in prime time like it did when we baby boomers were kids, Julie Andrews would be the perfect host.  Watch her new series and you'll absolutely agree with me.  Dame Julie is a human treasure who always gives her best -- and her best is always excellent. 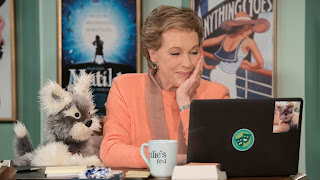