See SOMETHING FOR EVERYONE

It's dark.  It's delicious.  It's a modern-day fairy tale in which a handsome coachman is really duplicitous.  He plots to have a life of privilege in the castle -- like a Prince Charming. SOMETHING FOR EVERYONE is an overlooked gem from 1970 starring a madly glamorous Angela Lansbury as a widowed countess and Michael York as the charming fraud.  It's wickedly good and very entertaining.  You will get a kick out of their corruption. 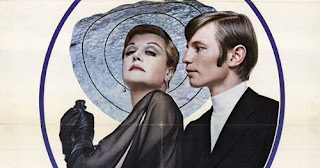 1966 was a magnificent year for Angela Lansbury.  She was known in Hollywood as a solid dramatic actress who scored Oscar nominations in the Best Supporting Actress category for GASLIGHT (1944), THE PICTURE OF DORIAN GRAY (1945) and THE MANCHURIAN CANDIDATE (1962).  Broadway gave her the kind of radiant leading lady stardom that Hollywood had not.  She surprised the entertainment industry when she landed the plum role of MAME in the Broadway musical version of the classic Broadway and movie hit comedy, AUNTIE MAME.  Hollywood had never really utilized Angela Lansbury's singing, dancing and comedy skills.  MAME opened and she became the hottest ticket on Broadway.  Songs she introduced in MAME were covered by popular singers such as Eydie Gormé, Shirley Bassey and Robert Goulet.  They were big hits on Top 40 radio and the record charts.  Many years later, even the TV cast of GLEE recorded a classic she introduced in MAME.  Lansbury played the saloon owner, the vamp rival in the MGM musical western, THE HARVEY GIRLS, starring Judy Garland.  Lansbury's singing was dubbed because MGM didn't feel her voice was sultry enough for the 1946 feature.  In late 1960s, Angela Lansbury was a glamorous Broadway musical star.  Stardom finally arrived when she hit 40.  In SOMETHING FOR EVERYONE, the multi-talented Lansbury was not the supporting actress. 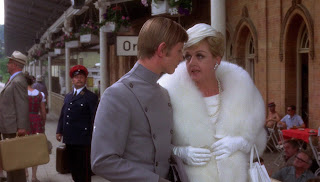 1970's SOMETHING FOR EVERYONE is not a musical but it does show that Hollywood had really dropped the ball by not giving Lansbury sophisticated comedy roles.  If you know Angela Lansbury mostly from her long-running MURDER, SHE WROTE television series and her voice-over singing as Mrs. Potts in Disney's animated 1991 classic, BEAUTY AND THE BEAST, you need to find and listen to her MAME original Broadway cast album vocals and you need to see SOMETHING FOR EVERYONE.

The widowed, elegant Countess notices how handsome and sexually attractive this poor young man in need of work is.  He notices that she notices.  She gives him a job.  He's the opportunist who wants privilege and must get rid of anyone who stands in his way of living the good life in the castle.  As Sally Bowles will say to Michael York's character in 1972's CABARET, that Austrian castle has an air of "divine decadence." 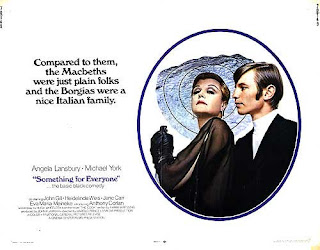 Play this SOMETHING FOR EVERYONE clip to get a whiff of that decadence:
I have seen this movie several times and loved it a little more each time.  I always rented the VHS or saw it at a revival movie theater because it was never on TV.  Well...it's now on Blu-ray thanks to KinoLorber.com. Look for it there and on Amazon.

On a weekend, I recommend you watch SOMETHING FOR EVERYONE as half of a double feature.  Watch it with the new documentary BEST WORST THING THAT EVER COULD HAVE HAPPENED which I saw and absolutely loved on Netflix.  It's a moving, heartwarming look at middle-age and the dreams of youth within the true backstage story of a Hal Prince and Stephen Sondheim show that opened and unexpectedly flopped with a loud thud on Broadway in the 1980s.  Yes, the true story of a Broadway musical that got killed by the critics now provides the basis for a moving and heartwarming documentary.  Trust me on this. So, why should that 90-minute documentary on Netflix be on a double feature with a decadent modern-day fairy tale set in post-war Austria?  The famous, acclaimed producer of that Broadway flop is seen quite a bit in the documentary.  1970's SOMETHING FOR EVERYONE is one of the rare movies that he directed. 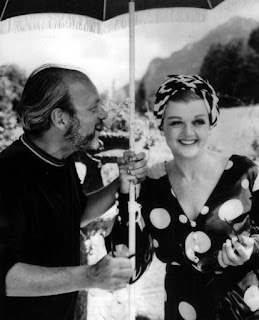 Yes.   Broadway producer/director Hal Prince directed his future SWEENEY TODD Broadway star, Angela Lansbury, in SOMETHING FOR EVERYONE.  It's the best of two films he directed.  The other one was a 1977 version of Stephen Sondheim's A LITTLE NIGHT MUSIC, a musical starring Elizabeth Taylor singing "Send In The Clowns."  Seriously.  Stick with SOMETHING FOR EVERYONE.