The 1970s was a bountiful decade for good movies. In that whole decade, Hollywood was really free of the stifling, sexist, archaic production codes and censorship. We could see stories that were more realistic, more raw, more challenging. Also, there was new young talent behind the cameras.  Spielberg, Scorcese, Coppola, De Palma, Lucas. There were 1970s movies that didn't gain the fame and box office popularity that a STAR WARS, THE GODFATHER, CABARET, BLAZING SADDLES, ANNIE HALL, JAWS or CHINATOWN did, but they were good movies with fine talent just the same,  For me, one such film is 1979's THE ONION FIELD with a screenplay by Joseph Wambaugh based on his nonfiction book of the same name. The movie was directed by Harold Becker. It's based on a true life Southern California murder and court case that I recall reading about in The Los Angeles Times when I was a kid. The cop-killer case would come back in the news. It made the papers again in 2012 when the kidnapper/killer from this notorious case died in prison at age 79. Two L.A. cops were kidnapped by two men. One was black, the other white. The cops were driven to an onion field in Bakersfield. One was shot and killed. The other escaped.  The movie THE ONION FIELD introduced us to some strong new talent. 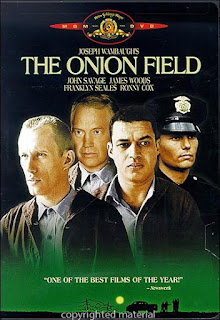 I graduated from Marquette University in Milwaukee. After graduation, I stayed in Milwaukee to start my broadcast career. I had a hunch I could hook myself up a radio/TV job there faster than I could back home in L.A.  In L.A., you had to be blond even to get a job as a radio announcer. Milwaukee's ABC TV affiliate hired me to be a weekly film critic. One of the first films I was assigned to review was THE ONION FIELD. A co-worker and I went to see it. Afterwards, she and I talked a lot about how good that new actor James Woods was as the white killer. Slim, with a buzzcut and large eyes, he looked like an evil librarian. James Woods went on to become a 2-time Oscar nominee. That was a breakout killer role for a new actor in the same way that Richard Widmark's career was launched when he played a crazed killer with a crazy laugh in 1947's KISS OF DEATH. 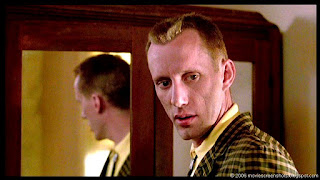 His was not the only performance in this drama that grabbed me. The black killer was played memorably by handsome and extremely talented Franklyn Seales. He put his whole heart and soul into his performance as the sad-eyed Jimmy, a constant life loser who was coerced into taking that ride where he'd see his persuasive partner kill a cop. Just like actor Howard E. Rollins Jr (of RAGTIME and A SOLDIER'S STORY) Franklyn Seales was an actor who died too soon. 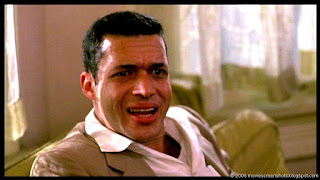 I saw Seales in Milwaukee.  Before this film was made, he had a lead role in a play done by our Milwaukee Rep Theater. (I used to be an usher for the Milwaukee Rep during my college years and I absolutely loved that job. I got to see plays for free.)  Franklyn Seales played the lead character in the Milwaukee Rep's TRIAL OF THE MOKE. The play centered on racial prejudice aimed at shooting down the reputation of West Point's first black cadet graduate. The play was recorded for TV presentation.  Fellow new actors in that 1978 TV presentation were Alfre Woodard, Samuel L. Jackson and Howard E. Rollins Jr.

Hollywood should have been sending Franklyn Seales other good scripts just like it did to James Woods after 1979's THE ONION FIELD. But, you guessed it, there was the color problem. Seales commented that there wasn't much work for a light-skinned black actor.  That's why you need to go to Amazon Prime and rent the video. When you see how handsome and how talented he was, you will vocally curse Old Hollywood's racial ignorance.  Franklyn Seales went to television, like many actors of color do, and had steady work on the 1983-1987 NBC sitcom, SILVER SPOONS. He died in 1990 at age 37. We lost him and Howard E. Rollins Jr. to AIDS.

"There's no gratitude in a policeman's trunk, Mom." That's a touching line from another actor in THE ONION FIELD whose dramatic depth and emotional honesty made a scene one that has lingered in my mind ever since I first saw it.  The character is the L.A. cop who is killed in the onion field. He's a good young man, but you sense a spiritual dissonance about him. Nothing bad. He just doesn't know if he's appreciated -- if he's adding something to life the way his late father did. His mother reassures him as they have tea. He was a kid who played classical piano and wanted to be a doctor. But he grew up to be a cop.

The scene? Bravely facing something dark and inevitable, he looks up at the full moon and, in his mind, hears bagpipes. His parents were both of Scottish descent. Then he tenderly touches the back of his partner's hand.  That scene gets me every time. That doomed police officer was played by Ted Danson in his film debut.  That scene and a film's closing scene with the dead policeman's mother years later in 1979 always move me. Beautiful acting. 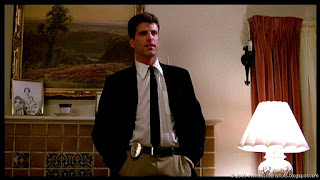 THE ONION FIELD is a film in which even actors with brief supporting roles or bit parts stand out. Ted Danson, as we know, went on to TV sitcom fame.  He's in a hit sitcom now on NBC. You'll also see Christopher Lloyd before his TAXI sitcom years and one of the Darryls from Bob Newhart's NEWHART sitcom. Both play prison inmates in the crime drama that goes from 1963 to 1979. Click onto this link to see a trailer:

The film was made when Hollywood was still timid about giving lead roles to black actors and greenlighting black stories. The play THE TRIAL OF THE MOKE should've been adapted into a courtroom drama big screen movie starring Franklyn Seales. Also, the images of gay black men left a lot to be desired back then. The film's opening scenes show a black drag queen being taken into custody at a Hollywood precinct. Her almost-customer gets busted too. He's a short milquetoast of a guy who starts to freak out because he'll be charged with being gay. He gets tackled by about four big brawny cops and one proceeds to punch him in the face until he bleeds. Obvious unnecessary police brutality. The police term for the man's freak-out was "homosexual panic."  Author/screenwriter Joseph Wambaugh was on the LAPD for 14 years before he started writing best-sellers.

In the movie, we follow the other cop (played by John Savage) as he wrestles with survivor's guilt and his LAPD reputation. We follow the court case in which the white killer acts as his own lawyer and we see his black partner endure some unfair treatment in the prison system. He's at a racial disadvantage. Franklyn Seales. Man, was he good. And he left us way too soon. If you're up for a good drama featuring actors very early in their film/TV careers, check out THE ONION FIELD.