Just last month, November, I posted a blog piece about singer/actor Josh Groban on the original Netflix series called THE GOOD COP.  I logged on to watch the first episode and wound up binge-watching the first three episodes.  They were that good, that entertaining. I wrote about how much I loved Groban and Tony Danza starring as father and son cops in New York, and I added my hopes that it would get picked up for another season. 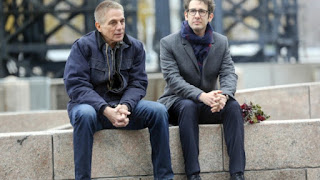 Well...my hopes were dashed. Netflix did not pick it up for another season, but the first season is still available.  I watched Episode #4 called "Will the Good Cop Bowl 300?"

I will go back and watch the other episodes because, when #4 ended, I found myself saying "Can't THE GOOD COP get scooped up and renewed on a network like NBC, CBS or ABC?  If you liked the ABC series, CASTLE, I think you'll dig THE GOOD COP.  If you're a Josh Groban fan, you must watch. He doesn't sing on this series, but you really get to see what a versatile actor he is.  He's the somewhat nerdy intellectual detective who is excellent at his job and always, always goes by the book.  His dad strayed a bit.  The hipster dad cop wound up doing time. He's out of prison and now lives with his detective son. The murder in each episode is clever. You're eager to see how the killer will be found and what else we'll learn about the father and son relationship while the crime is being solved. 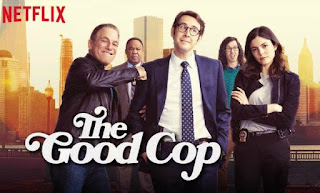 In Episode #4, the A story is the murder committed in a Brooklyn bowling alley. The longtime employee is shot in the head. The B story is the detective son becoming such a champ in a tournament at the same bowling alley that victory goes to his head.

The bowling episode was directed by Rodrigo Garcia.  Back in 2009, he directed an independent film that I just had to see more than once.  First of all, it gave Samuel L. Jackson a chance to play a rather reserved, sophisticated, academic type of character. He plays a lawyer at an upscale firm in Southern California. He's having a steamy affair with another lawyer. She's played by Naomi Watts. The story centers around a middle-aged birth mother who wants to find the daughter she gave up for adoption when she was an unwed teen mother. This 2009 drama is called MOTHER AND CHILD and it has some actors in top form doing some different kind of material that lets them exercise their dramatic muscles.  In addition to Samuel L. Jackson and Naomi Watts, there's Annette Bening, Kerry Washington, Jimmy Smits and Cherry Jones as a very earthy and wise nun.  A woman gave a child up for adoption, a woman wants to have a child but can't, and another woman doesn't know who her biological mother is. That's MOTHER AND CHILD directed by Rodrigo Garcia.

As for THE GOOD COP, here's a taste of it.
The opening scene of the first episode is so well-played and well-written.  Father and son are in the front seat of a car stopped at a stop light.  The situation and the conversation set up the whole dynamic of the relationship and the tone of the show.  THE GOOD COP was created and written by Andy Breckman -- and I really wish it would get picked up somewhere.  By the way, Episode #3 called "Who Is the Ugly German Lady?" is fabulously funny.  John Carroll Lynch, the tall and brawny actor who played the sweet Midwest husband to Frances McDormand's cop character in FARGO, is the guest actor in that episode.

OK, you fellow Josh Groban fans, get over to Netflix and watch the first season of THE GOOD COP while it's still there.