NBC and SATURDAY NIGHT LIVE just were not ready for the comedy and acting brilliance of Ellen Cleghorne.  There's a current interview of her that you must read.  I've give you the website at the end of this blog post.  During my TV career in New York City, there were two black women who were groundbreakers in the SNL cast and both of them were extremely kind and helpful to me.  The first woman was the late, great comedian/actress Danita Vance.  She was a friend and neighbor when I lived in Brooklyn.  The second woman came after Danitra Vance.  She is … Ellen Cleghorne. 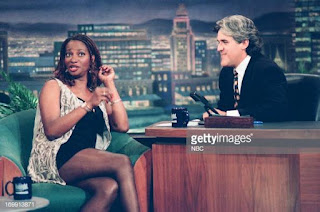 Ellen had seen me on VH1.  She knew that I had my own talk show, a talk show that got me greatly-appreciated good reviews in The New York Times, People Magazine and TV Guide. My contract ended. Next, I was the host of a game show for Warner Bros. syndication that was a month-long summer replacement on national TV. Then I was approached to be a regular on a new WNBC/Ch 4 live weekend morning news program. Initially, I was offered the opportunity to do entertainment features and interviews. Also, I'd be in the studio doing film reviews.  That really made me lick my chops because African-American talent was never seen doing weekly film reviews on national TV or in many local big city markets.  I was hungry to crack that color barrier.  I took the job.

The afternoon before our 6am Saturday morning premiere, my duties were changed by the all-Caucasian producers. Instead of film reviews and entertainment features, I'd do the community calendar. I would tell folks about family events such as street fairs, bake sales and community theater shows. I would go out on location to do remote live segments from shopping malls and some street fair.  I was the third member of the original local show morning trio.  The "black guy." The anchors were Matt Lauer and Magee Hickey. Matt would be re-assigned within our first months because NBC had network stardom plans for him.  This was the fall of 1992.

Another thing.  I was not under contract although I thought I would be.  But there were excuses like "Well, it's still being typed up" and "It's being looked over by legal." So I worked without a contract 6 months or more.  When I did finally get the contract, the year was almost up. When the first year ended, I was not given another contract.  I worked without one. 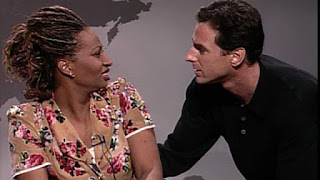 I met Ellen Cleghorne.  Warm, wise, sophisticated, supportive, huggable and hilarious Ellen. We both worked in 30 Rock.  She asked me why I wasn't in the studio doing celebrity interviews like I did on VH1. Adam Sandler and actor Danny Glover asked me the same question. But, when Ellen asked, she quickly followed the question with, "Wait. I think I know."

The answer was … because I wasn't the same color as Matt Lauer.  Ellen and I went out casually a couple of times and talked about our experiences working in different departments at 30 Rock. 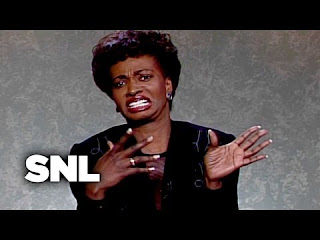 In my second month on the weekend show, I was assigned to cover a Madonna press event. I was not expected to get soundbite from her -- but I did. More than one. Katie Couric left a message on my voicemail saying "Good hustle on the Madonna piece, Bobby Rivers. Good work."

Even after getting soundbites from Madonna, I was still sent to shopping malls to talk about bake sales. But, one morning, I got to stay in the studio and I was able to have Ellen as a guest I could interview.  She opened our interview by saying, "It's so nice to see you in the studio. They usually have you way out at a shopping mall."

The crew broke up laughing.  But that little comment helped. A few viewers who'd followed my career called in and agreed with her.  Reluctantly, the producers gave me a tad more studio time and an occasional celebrity interview.

I quit in January 1995.  The WNBC news director wanted me to stay, without a contract, to do the same thing and with the understanding I would never move up to network opportunities. So, I did not stay.  I chose to leave a hit show.  For me, personally, that was progress. I refused to visually integrate the morning show team while being treated like a second class citizen. I chose not to endure that treatment simply because I needed the part-time employee money. I walked away from white producer comments such as "I don't think you have the skills to cover entertainment" and "You should consider yourself lucky to have this job."

I read the interview with Ellen Cleghorne and just discovered that the black talent on SNL before Ellen also worked without contracts just as I did for WNBC News.  We lost the supremely talented Danitra Vance to breast cancer in 1994.  I agree with what Ellen says about her in the article.  Had she lived, Danitra would have a career arc similar to the one Viola Davis has.

Read the article. It reminds you that diversity and inclusion are still vital in the country today -- not just in palaces of show biz entertainment. This diversity happens inch by inch, it seems.  Ellen Cleghorne deserves out attention. 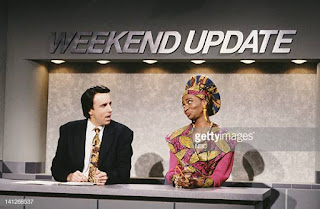 The detailed article and interview by Andy Hoglund is called Ellen Cleghorne on Breaking Down Saturday Night Live's Racial Barriers, and the Ones That Remain.  You can find the article here:  slate.com.

Here's my VH1 talk show demo reel and the Madonna piece I did in the second month of the WNBC News program.  Most of you have probably already seen them.  Do me a favor.  If you think I should put these experiences in book form, please let me know.