Did You See MARY POPPINS RETURNS?

It was Saturday night and I needed a Blunt.  An Emily Blunt. I'm a big fan. Emily Blunt is always worth the price of a movie ticket. She's so versatile and able to be absolutely believable and distinct in drama (SICARIO), comedy (THE DEVIL WEARS PRADA) and musical comedy (INTO THE WOODS).  Today she stars in a follow-up to one of the biggest, brightest jewels in the Disney collection of classics. She's a pip as Mary Poppins.

1964's MARY POPPINS, with its combination of humans and animated characters in a pastel-colored fantasy that introduced moviegoers to Julie Andrews, got 13 Oscar nominations.  Julie Andrews won for Best Actress. "Chim Chim Cher-ee" won Best Song.  David Tomlinson played the punctual, fastidious banker dad who paid more attention to his job than he was to his two youngsters. Glynis Johns was the busy suffragette mother. Now grown Michael works for the same bank his father did. Jane is an unmarried labor organizer helping her heartbroken brother. He's a widower father, living in the family home of their youth with his three children. It's the Great Depression. He's on the brink of eviction because he's late with payments on a bank loan -- to the very bank that employs him. One more thing. It's the early 1930s and Michael now has a 1970s-type porn star moustache. Why Mary Poppins allowed him to keep that, I'll never know. Broadway wunderkind and Pulitzer Prize winner Lin-Manuel Miranda is warm and winning as Mary's lamplighter friend. You get that tingly rush of joy when you see the musical guest appearances by two stars who are in their 90s -- Dick Van Dyke and Angela Lansbury.  Lansbury's singing sounds as good now as it did when she sang in Disney's 1991 BEAUTY AND THE BEAST. Meryl Streep has a delightful but totally unnecessary comedy number as the wacky redhead  cousin to Mary Poppins. Streep in this sequel is the equivalent to the Ed Wynn character in the 1964 original. The penguins are back for this follow-up. So are the pastels. 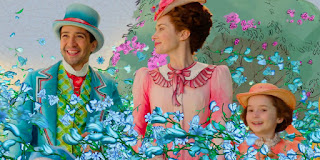 Emily Blunt has a screen gift. The actress can get more an eye-roll or a side glance reaction than others can get with five lines of dialogue.  She does not at all imitate the Julie Andrews performance. She is her one Mary Poppins, one who continues to be magical, practical and unsentimental. Like Andrews, Blunt shows that the mysterious, magical nanny may pose as being unsentimental but she has deep affection for the children, big and small. She appears when she's needed, she helps those who need help, then she leaves before she can be thanked.  She's like The Lone Ranger in skirts. Emily Blunt was the perfect choice for this role in this version. If you have youngsters in your family and need some family entertainment over the holidays, put this on your list. It's beautifully shot, reverently directed by Rob Marshall and the animation fabulous. I loved the bathtub underwater sequence. Here's a trailer.
Disney gives us something we do not often get anymore. Something that was regular fare in the Hollywood of the 1930s, 40s, 50s and into the 60s. It's a movie musical with an original score written for the film.  Back in Old Hollywood days, the major studios hired the top tunesmiths of the day to write songs to be introduced on screen by Bing Crosby, Fred Astaire, Alice Faye, Frank Sinatra, Betty Hutton and Doris Day.  TOP HAT, SWING TIME, SHALL WE DANCE, THE WIZARD OF OZ, MEET ME IN ST. LOUIS, CALAMITY JANE, GIGI and Disney's MARY POPPINS are all original screen musicals with great songs introduced by great stars.  Those scores had songs that became standards.

Hollywood gave us songs that we remembered and hummed as we left the movie theater.  That brings me to the main point of this blog post.  Did you see MARY POPPINS RETURNS?  This original Disney musical has one of the most pleasantly forgettable scores I've ever heard in a new movie. During the movie, I enjoyed the songs very much.  In fact, I think one in particular will be an Oscar nominee for Best Song.  But, when the movie was over that night and come the dawn of the next day, I could not hum a single tune from it.  I wound up humming "A Spoonful of Sugar," "Step In Time" and "Supercalifragilisticexpialidocious" from the original 1964 classic. If you saw MARY POPPINS RETURNS, could you hum any of the songs when you left the theater?

The new songs were composed by the extremely talented Marc Shaiman and Scott Wittman.  On Broadway, they gave us the songs for the musical version of HAIRSPRAY. Shaiman has done special material for SATURDAY NIGHT LIVE and SOUTH PARK.  He arranged music for the movies WHEN HARRY MET SALLY and SLEEPLESS IN SEATTLE. He's had a long association with Bette Midler. Remember when she sang "One For My Baby" to Johnny Carson on his final TONIGHT Show with guests in 1992? Marc Shaiman accompanied her on piano. Shaiman and Wittman treat the original memorable score by The Sherman Brothers with respect and you can feel how they allowed it to inspire their compositions. Shaiman's arrangements, if you listen to those romantic comedy soundtracks of the two hits movies I mentioned, reflect Shaiman's affinity for a 1940s big band sound. The sunny pop music sound of 1950s to early 60s is his sweet spot in compositions. HAIRSPRAY was a ripe assignment for him musically. He couldn't give us the heavy Black/Latinx urban music flavor in HAMILTON like Lin-Manuel Miranda did.  Extending the sound of a Disney score from the early 60s was a fine task for Shaiman because he's been extending that kind of sound for some time. And there are incidental musical passages in MARY POPPINS RETURNS, like the race to the bank scene, that sound just like his arrangements from SLEEPLESS IN SEATTLE. If MARY POPPINS RETURNS had been made in the early 1990s, the Meryl Streep number would've gone immediately to Bette Midler.

All the Banks children have broken hearts needing repair in MARY POPPINS RETURNS. The grown children and the three little ones. Mary Poppins comforts the little ones with a lullaby when they miss their late mother. I lost my mother last year, so this Marc Shaiman and Scott Wittman tune touched my heart and put tears in my eyes. I think it has a good chance to get an Oscar nomination. Emily Blunt does a lovely delivery.

I have to admit that I looked for this song online after I saw the movie, because I couldn't remember it and I wanted to hear it again.  I tried to hum it by kept humming "Feed the Birds" from the first MARY POPPINS instead. Now I can replay and memorize it.