In my previous blog post, I wrote my review of GREEN BOOK.  The film's lead actors, Mahershala Ali and Viggo Mortensen, have been nominated for Screen Actors Guild and Golden Globe awards. Quite a few movie reviewers predict the actors will also get Oscar nominations and they predict GREEN BOOK will be a nominee for Best Picture of 2018.  I'm extremely keen on seeing if Octavia Spencer will become the most Oscar-nominated black woman in Hollywood history when the Academy Award nominations are announced next month. 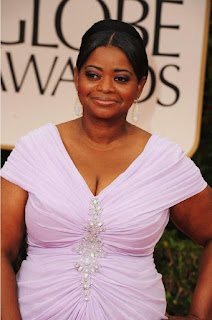 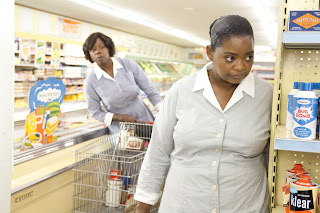 She went on to get Oscar nominations in that same category for HIDDEN FIGURES (2016) and THE SHAPE OF WATER (2017).


Viola Davis and Octavia Spencer are currently the most Academy Award-nominated black actresses in all Hollywood history with three nominations each.  Although Octavia does not have a role in GREEN BOOK, hers is one of the first names you see in the closing credits.  Why?  She's an executive producer of the film.  Will she be up an Oscar if the film gets a Best Picture nomination on Tuesday morning, January 22nd?  I'm eager to see. 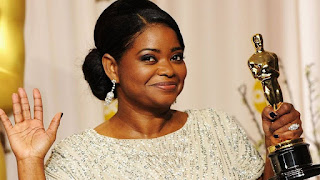 Octavia Spencer and Kevin Costner both starred in the highly entertaining and greatly appreciated HIDDEN FIGURES. The two starred opposite each other in an earlier film.  It's one that, to me, shows they need to be reunited again in lead roles. They click and they have chemistry in the 2014 family drama called BLACK OR WHITE.

This feature got some enthusiastic promotion but, if I recall correctly, the movie got dwarfed at local cineplexes by big action/fantasy blockbusters.  BLACK OR WHITE is worth a look.  First, let me tell you that Kevin Costner treated me so well early in his film career.  I interviewed him during the press film junket for SILVERADO, an all-star western that newcomer Costner stole with his star quality. After our interview, he wanted to know a little bit more about me. This was 1985. You did not see a lot of black folks on junkets to conduct entertainment news interviews then.  I was new to New York City, I told him, and added that I was from South Central L.A.  Near Compton.  His face lit up.  "I know Compton.  I'm from Lynwood."  Costner relayed to me that he was from working class roots near Compton, the member of family that was just getting by like pretty much every other family in the neighborhood.

In New York City, I ran into him a couple of other times in non-interview situations and he always greeted me like we were old buddies from the neighborhood.

He's a member of an interracial family in BLACK OR WHITE.  He and Octavia plays relatives.  There was a death in the family.  He's now taking care of his granddaughter, a sweet little black girl.  He's got a nice upscale home. He's also got a drinking problem. This causes conflict with the girl's paternal grandmother, played by Octavia Spencer.

One of the things I loved about this movie was that Costner's character would drive to a black neighborhood in South L.A. and park there in a heartbreak. He was totally at ease and folks knew he was totally at ease.  This is like Costner himself.  He didn't drive into a black neighborhood alone frightened and feeling like a different colored fish out of water.  BLACK OR WHITE has a better screenplay balance than GREEN BOOK because you learn about the life of both the white and black lead characters.  One does not take a back seat to the other.  Both are in the front seat.


Andre Holland, who was later seen in the Oscar-winning MOONLIGHT, and Anthony Mackie are also in the BLACK OR WHITE cast.

If your personal motivation has been lagging lately, here's something about Octavia Spencer that may pump up your perseverance.  In 2002, she had a bit part in SPIDER-MAN starring Tobey Maguire and Kirsten Dunst. Octavia is in the first 20 minutes of the movie. Peter Parker (Tobey Maguire) enters a sports competition and Octavia Spencer has a line or two of dialogue as the check-in girl. Today, she is one of the most Oscar-nominated black actresses in Hollywood history, she's an Oscar winner, and she could be in the running for some Hollywood gold again come January 22nd.