She was one of the most fascinating, knowledgeable, vivid female TV hosts in the 1990s. She was original, innovative, charismatic and a free thinker. She explained nudity in famous paintings with such a passion that it made you want to applaud the long-dead artists. She made classic artwork that was centuries old come to life with her explanations of its history.  And, yes, it was unusual to experience such passion coming from a little nun in her senior years. I loved watching art historian Sister Wendy Beckett on PBS. I loved meeting her. 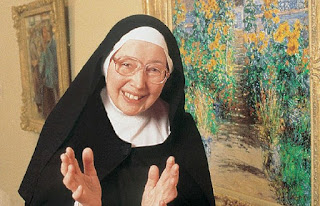 At first sight, one may have that she was a nun character in an entertainment vehicle like the movies SISTER ACT or Ida Lupino's Catholic boarding school comedy, THE TROUBLE WITH ANGELS. She even laughingly admitted she had a funny look. But she was absolutely serious about art history. Her knowledge and passion for her subject were contagious. 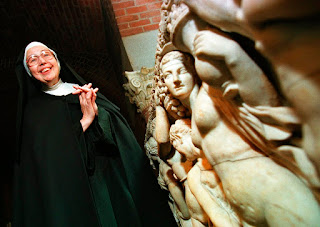 I learned that first-hand when she was booked to appear on the live weekday morning show I worked for in the 1990s.  On the Fox 5 channel, the weekday morning show is called GOOD DAY NEW YORK. Sister Wendy's booking taught me, not just a little something extra about art, but about images of black and Latinx people that white TV producers held in their minds. These images were frustrating and incorrect and they carried over into images they would project on a live news program in a big city like New York.

The executives were all white. Our show's staff of behind the scenes workers was quite racially mixed. A lot of black and Latinx employees, many of whom arrived at work in the pre-dawn hours for our morning show that started at 6:00.  Late one morning, after the show had ended, I was in an edit booth with an editor putting together a piece of mine that would air later in the week.  One of my favorite co-workers, a young black woman from Brooklyn whom I will call Loretta came in and asked if she could speak to me. Loretta always did good work. She was conscientious and was a working class woman in Brooklyn, working hard to keep rent paid in the 'hood like a lot of other folks.

Loretta had tears in her eyes.  The editor and I stopped working, asked her what was wrong and we let her speak. She began by asking me, "Do you know who Sister Wendy is?"

Loretta let out an exhale of relief. There had been a major newspaper profile on the art historian in The New York Times. Loretta read it.  She had watched Sister Wendy's PBS show and said, "At first, I thought it was a comedy show because of how she looks. But then I realized the show was serious. Bobby, she got me so interested in art that I now go to art museums. I read the newspaper article and then got word that she's in town and available for interviews. But the producer says I can only book her if I make it a funny segment."

"Well," Loretta went on, "she suggested you do the interview and say we have callers on the line. But the calls will really be prank calls from the control room with questions about sex because she talks about sex in art. Bobby, I don't want to do the segment like that. Sister Wendy has got me interested in stuff I was never interested in before."

I was seething.  So was the editor. I'm Catholic. I would never, ever have disrespected a nun. Also, that idea from someone in charge was absolutely ignorant and insulting. I told Loretta I wanted to do the interview and I would do it respectfully. We left the edit booth to meet with the white producer.

I wanted to do the interview. I refused to let it have gag phone calls.  The GOOD DAY NEW YORK executive producer at that time had booked a pet psychic. Yes, you read that correctly. The pet psychic took live calls from viewers who wanted to know how their dead pets were doing in the Afterlife. The psychic, a white lady, got 8-minutes of live TV time. More than once. She did not get any gag phone calls from the control room.

The producer who wanted to embarrass Sister Wendy for laughs revealed why she felt the 4-minute interview would need a humor jolt. "Our research," she said, "shows that black and Latino viewers don't care about the fine arts or technology."

Other nearby co-workers of color in the office stopped typing for a moment when they heard that come out of the white producer's mouth.  I gave my opinion that "their research" was wrong and insulting considering how many Black and Latino people worked in that office to get the show on the air every day.  I would do the interview and, if an occasion for levity came up naturally in it, that would be enough. The focus would be on her PBS show, her books and her love for art.

Sister Wendy, in person, reminded me of every nun that I loved dearly from my Catholic grade school days. She had only one demand -- that the segment finish in time so she could attend a nearby morning mass.  She appeared on GOOD DAY NEW YORK. Here's something unusual to write about a nun -- she killed. The crew in the studio loved her. And we had a moment of mirth.

Loretta accomplished the booking she wanted to accomplish. And she got to meet Sister Wendy. The unconventional convent resident and art historian passed away at age 88.  She brought so many of us closer to the fine arts.  Thank you and bless you, Sister Wendy.
at December 27, 2018