RAIN MAN and THE ROSE.  In this blog post, you'll hear a little-known song from the singer/entertainer we came to call "The Divine Miss M."  Bette Midler. 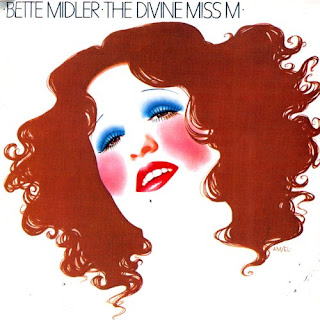 What a year 1977 was for pop culture entertainment.  At the movies, we were pulling out our wallets at the box office to see some new movies more than once. New movies like STAR WARS, THE GOODBYE GIRL, ANNIE HALL and SATURDAY NIGHT FEVER. On Broadway, theatergoers applauded FOR COLORED GIRLS and ANNIE.  We still shopped at record stores then.  That year, many of us bought the AJA album by Steely Dan, RUMOURS by Fleetwood Mac and BAT OUT OF HELL by Meat Loaf. If you were fresh out of college and landed your first professional broadcast job working on an FM rock radio station -- like I did --  you thanked Heaven for new cuts from albums by Billy Joel. He wrote songs with a plot. His songs ran about 6 minutes long.  Longer than the standard radio airplay time for a tune. But, you could start a Billy Joel song and have plenty of time to dash off to the restroom for a toilet break before the song ended. Bing Crosby gathered family members for his final network Christmas special. We all talked about it in 1977. In his final holiday special, airing on CBS, he sing a duet of "Little Drummer Boy." Not with a family member. He sang it with David Bowie.  A brassy, bawdy and lovable new singer named Bette Midler was starting to get national attention. The energetic and intelligent redhead looked like a back-up singer for a current rock star. She was both whip-smart and wacky, a blend of hip counter-culture sensibility and the soul of an old-fashioned show biz trouper from the 1930s and 40s.  I saw her on NBC's TONIGHT Show with Johnny Carson when Carson was still doing the show in New York City. She looked like she was about to launch into a solid rock 'n' roll medley. Instead, she belted out a lively arrangement of "The Carioca" from the 1933 musical FLYING DOWN TO RIO. It was her first appearance on The TONIGHT Show -- and it would definitely not be her last. Midler had a hit record with her 1972 sultry cover of "Do You Want To Dance?" from her debut album. It got lots of radio airplay. 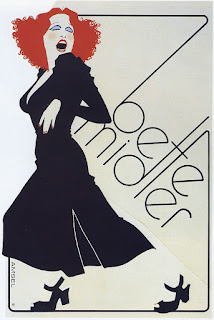 Her star got brighter and brighter. Her high-octane and heartwarming stage shows got bigger and bigger audiences. In 1977, a few years before her film debut in THE ROSE which would bring Bette her first Oscar nomination for Best Actress, she had a prime time music variety special on NBC called OL' RED HAIR IS BACK. One of her special guests was Dustin Hoffman. Not only did he get to display his skills as a pianist, Hoffman revealed that he and Bette Midler had written a song together. I think it's a good song. To see them perform it in her 1977 NBC special,click onto the link:

Here's some movie trivia for you.

I did a TV interview with Dustin Hoffman when he was promoting  1982's TOOTSIE. I asked him about the song he wrote with Bette Midler. He told me that he wanted to use their composition as the love song in TOOTSIE, but director Sydney Pollack nixed the idea. He was using "It Must Be You" sung by Stephen Bishop instead. However, there's a birthday party scene in the first ten minutes of TOOTSIE. Hoffman added that when he's playing piano in that movie scene, he's playing "Shoot the Breeze," the song he wrote with Bette Midler.

Midler was a Best Actress Oscar nominee for 1979's THE ROSE and 1991's FOR THE BOYS. In 2017, she won a Tony Award for her acclaimed performance in a hit revival of the Broadway classic HELLO, DOLLY!
at December 01, 2018