It's About TIME For Journalists

It's choice of such piercing relevance and inspiration that it gave my heart a surge of warmth.  TIME magazine reminded us of the aching need for good journalism, freedom of the press and the hard -- often fatal -- work done by good journalists committed to the truth. TIME named Jamal Khashoggi and other journalists as 2018 Person of the Year. 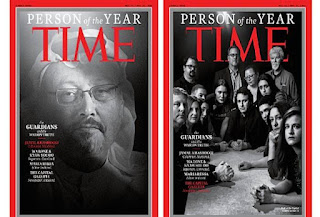 TIME calls the group of journalists "The Guardians" and refers to individuals "who have taken great risks in pursuing the truth."  Included in the group are the Capital Gazette staffers who were shot and killed this year in the offices of that Annapolis, Maryland newspaper. 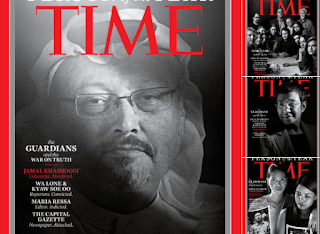 A free press is no small thing. It's something we most continually embrace, support and appreciate as much as we would a beloved relative or friend. As is mentioned in the cover story article, a free press marks the distinction between tyranny and democracy.


Good journalists bravely enter and report on those places too dark for us to consider ever entering, whether those places are geographic or in the minds of people in your own city.


For a double DVD feature the underscores the power of the press and reminds us that we in America have it to serve the governed, not the governors, rent Steven Spielberg's 2017 drama, THE POST, starring Meryl Streep (at her extra best) and Tom Hanks.  Follow that by watching Alan J. Pakula's 1976 classic, ALL THE PRESIDENT'S MEN, starring Robert Redford and Dustin Hoffman.  The same newspaper, at different times and with different reporters, deals with the same U.S. President lying to the public, disrespecting the press and violating the Constitution.