Mesmerizing style and a voice that was like a champagne cocktail for the ears. How I loved singer Nancy Wilson.  I'm old enough to remember when DJs on FM radio in Southern California called her "the new Ella Fitzgerald."  A great compliment, but Fancy Miss Nancy proved to be an original, a unique jazz vocalist.  My parents dashed out and bought the new singer's early albums.  Two of them were played frequently on the HiFi in our home.  Not just by Mom and Dad.  I loved them too.  My heart and mind had already been lit up by the art of classic films when I was in elementary school.  I loved Nancy Wilson's album on which she covered songs written for Hollywood movies. On the albums, I read the credits to see the name of the song, the name of the movie and then I'd look for the movie on TV.  Just like the actors with their dialogue, Nancy Wilson realized that a good song told a story.  It was a monologue set to music. She told the story while singing. She gave the songs her interpretations, finding previously unrealized depth of emotions with her remarkable phrasing. 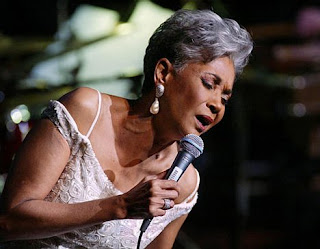 The same goes for her Broadway album.  That one introduced me to Broadway showtunes and the plays from which they came.  TV today reminds me of what waspish Broadway theatre critic Addison DeWitt says to a meagerly talented blonde in ALL ABOUT EVE. She wonders if TV holds auditions. He replies:  "That's all television is, my dear.  Nothing but auditions."

TV is well-populated with shows seeking the next pop music sensation.  We see young singers latch on to a song and do all sorts of vocal loop-de-loops impressing you with their lung power and vocal gymnastics, but often suffocating the emotions and depth of the lyrics.  These talent search competition shows are entertaining. But I miss the music variety shows that were standard network TV fare.  One of my favorites was ABC's THE HOLLYWOOD PALACE. The prime time Saturday night show had terrific guest hosts -- stars such as Fred Astaire, Judy Garland, Bing Crosby, Bette Davis and Joan Crawford.  They performed and they also introduced established and new talent.  Nancy Wilson was booked on THE HOLLYWOOD PALACE one night.  She took an old song, "The Very Thought of You," and made it new again. Her voice was a gift from Heaven.  To see and hear what I mean, just click onto this link:

I started my TV career in Milwaukee on the ABC affiliate. I began as a part-timer and, in my last year, I'd graduated to fulltime co-host and associate producer of a live weekday afternoon show with a studio audience. That was 1984.  One of our guests was singer Nancy Wilson, in town for an engagement. Regal, warm and appreciative she was.  When I moved to Milwaukee for college, I took the two early Nancy Wilson albums with me.  For me, it was such a huge thrill having her in person on our show that I just had to call my mother afterwards and gush "Mom! Guess who was on the show today in person?  Nancy Wilson!" 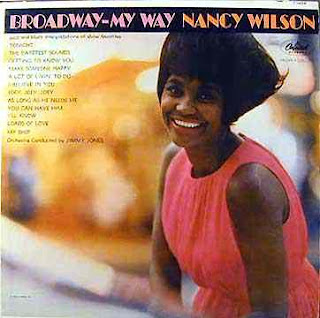 In my introduction before our interview, I showed graphics of those two album covers and told viewers how much I loved them and others.  That got a big smile from Ms. Wilson.  As we started the interview, she told me that, on the Hollywood album with her in that elegant yellow dress, she was pregnant with her first child. 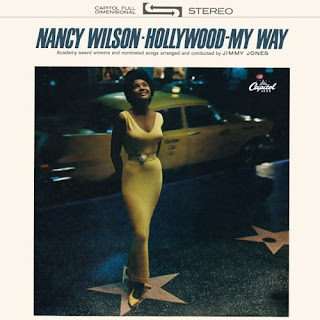 The news is out today that Nancy Wilson passed away at age 81.  The Gift and the Giver are reunited in Heaven. I am so grateful to Mom and Dad for bringing her artistry into my life.  Her voice was one of the sweetest sounds of my youth in South Central Los Angeles.

With that, here's Nancy Wilson from her Broadway album giving a bossa nova beat to the song Diahann Carroll introduced on Broadway in Richard Rodgers' NO STRINGS.  To hear "The Sweetest Sounds," just listen to this.


See what I mean? That's why I loved her for most of my life.  Nancy Wilson was wonderful.