Dick Powell Was a Dog

When I was little, TV was a form of home entertainment that provided you with some exercise.  Most television sets were a large boxes of lights, wires, tubes and bulbs positioned near a wall in your living room.  To change the channel, to turn it on and off and to adjust the volume, you had to get up and walk over to the TV set to make those changes manually. There was no remote control.  Also, you had to pay attention to the show. There was no cable. There was no VHS, DVR and no DVD to rent at a later date. You could not live tweet a show while it was in progress. You really did have to give the broadcast presentation your full attention. If it was a first run and you missed it, you had to wait for the summer repeats. If it was a movie you missed, you had to keep checking your local listings or TV Guide to see when it would air again.  Those were the days of just CBS, ABC and NBC plus whatever local independent stations you had in your town.  I've had a love affair with movies ever since I was in grade school. For a guy like me, growing up in Los Angeles was a blessing. Our network affiliates and our local indie stations were attached to Hollywood studio film libraries.  Local ABC was hooked up to movies in the Universal library.  It was on local ABC/Channel 7 where I discovered that Dick Powell had been a dog. 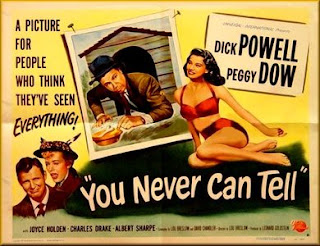 When you got home from school and before Mom called out the dinner was ready, you could see a late afternoon weekday movie on KABC/Ch. 7.  A lot of the movies were kid-friendly Universal films such as FRANCIS, the taking mule movies starring Donald O'Connor as the only human Francis spoke to, the MA AND PA KETTLE movies and some Abbott and Costello comedies.  Another film that became one of my all-time favorite old movies to see in my childhood was the 1951 fantasy/mystery called YOU NEVER CAN TELL.  To this day, I'm positive I was not the only kid who loved that movie.  The plot is simple.  A good, loyal dog is killed. Money is involved. The good dog goes to Heaven. The top animal spirits in charge grant the dog the ability to reincarnate as a human, return to Earth and solve the murder mystery.  Dick Powell plays the reincarnated dog.  He had a fabulous young Southern lady sidekick who was a racehorse in her previous life.  I loved her festive hat. I loved the way she caught up with a bus she had just missed. 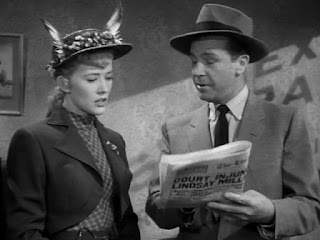 I know it's a goofy plot.  But the movie was only about 90 minutes long and, for kids, it was big fun. Cartoons, I LOVE LUCY reruns on KTTV/Ch. 11, YOU NEVER CAN TELL on KABC/Ch. 7, my record player, my transistor radio, some toys and family night at the drive-in movies …when I was a youngster, all that was Heaven on Earth.

Dick Powell is the pooch-turned-private eye in YOU NEVER CAN TELL. See it on TCM (Turner Classic Movies) Thursday, December 20th, at 9:30p ET.  I have not seen this movie in years but the sweet childhood memories of it are still dancing around in my head.  I even remember who committed the crime in it.

TV shows were already in reruns and syndication repeats when I was a boy.  From staying up with Mom and Dad to watch TV, I knew Dick Powell as a host on ABC and as a much-respected TV producer.  Then, in old movies on local TV, I saw that he had a terrific singing voice in breezy Busby Berkeley musicals of the 1930s.  On another independent channel, one linked to RKO, I saw that Dick Powel also played hardboiled, wisecracking private eyes.  I was fascinated with how Dick Powell reinvented himself before and after his reincarnation comedy. I remember him being on the front page of The Los Angeles Times in a photo with actor Jack Carson. The news was sad.  They both had cancer. They both died on the same day. And it was reported that they were best friends.

One of the other Universal films I used to see on KABC/Ch. 7 was a movie that showed us what a good hoofer Tony Curtis was.  Man, he could pick 'em up and lay 'em down like he was an act at The Cotton Club.  This bright musical comedy is called SO THIS IS PARIS starring Tony Curtis as one of three sailors on leave in Paris.  When celebrity mimics (like Rich Little) did imitations of Cary Grant and imitated Grant's voice as they said "Judy, Judy, Judy," I believe that piece of business was lifted from something Tony Curtis does in one of his musical numbers from 1954's SO THIS IS PARIS.  Tony Curtis, as you know, did another imitation of Cary Grant in the famous Billy Wilder comedy from 1959, the classic SOME LIKE IT HOT.
at December 19, 2018