Mexican director and screenwriter Alfonso Cuarón has given a new film that just landed on Netflix. I watched it on Netflix and I would pay to see it on a big screen in a heartbeat. I'd love to see it once more and in a theater. The movie is ROMA, one of the best films of 2018 I've seen. Roma is the name of an upscale district in Mexico City. The year is 1970.  I was a high school teen then in South Central Los Angeles. If you know the L.A. from around that time, Roma is like a Westwood or Brentwood in Los Angeles.  Residents in those communities could afford domestic help. Women in my community worked as domestic help. Memories of Cuarón's life color this black and white film. He's got the gift. He takes ordinary events, ordinary people and presents a touching story in a most extraordinary way. The main character we follow is Cleo. She's the dark-skinned Mexican maid to an upscale light-skinned Mexican family. 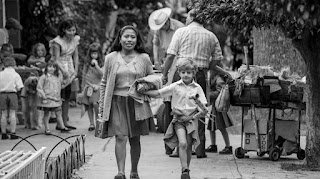 There's are touches of American pop culture in their lives. On the record player, we hear Yvonne Elliman sing "I Don't Know How To Love Him" from Andrew Lloyd Webber's JESUS CHRIST SUPERSTAR.  Cleo has a movie date. They see MAROONED, a Hollywood thriller about astronauts starring Gene Hackman, Gregory Peck and Richard Crenna.  In the first ten minutes of ROMA, Cleo did something very sweet. I was unprepared for the sudden rush of a childhood memory to the front row of my mind, a memory that put tears in my eyes.  Our mother died last year, in June, and this will be our second Christmas without her.  I miss her so much and that's made me extra sensitive this holiday season.  When dear Cleo tucks the children in bed at night, they say a little prayer.  It was the prayer to your Guardian Angel, a prayer I learned and recited often when I was a good little Catholic schoolboy.  The scene made me recall Mom tenderly tucking me in at night when I was a youngster. The head of my bed was right next to the bedroom window. Mom would sit on the bed and say, "Let's count the stars." We'd gaze out at the Southern California nighttime sky, count the stars and look for "the man in the moon."  When Cleo gently awakens the children in the morning, I remembered Mom waking me up the same way with "Wake up, Sleepyhead. Time to get the Sandman out of your eyes." 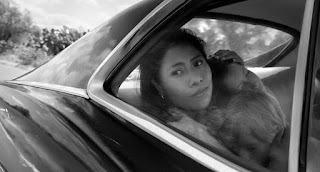 There is drama in young Cleo's life and in this story. I won't give you all the details. I want you to experience them for yourself if you choose to watch ROMA on Netflix. I can tell you that you'll see two women of different classes united in the same state. They are both facing motherhood while the father is gone. Their lives are changed. Here's a trailer.
In the open of the story, you do sense there's a deep wrinkle in the marriage of the academic and his wife that can't be ironed out.  That brought back memories too. Memories of watching my parents' marriage tatter and rip. There were five of us. Mom, Dad, my sister and brother. There was that awkward moment when our dinner table was no longer set for five, as usual. It would only be set for four. Our lives had changed.

In happier times, my parents loved movies. Film arts lit up my heart and mind by the time I was in the 2nd grade.  For a kid who adored films, my parents were great parents to have because they had such a keen interest in films domestic and foreign.  We went to the drive-in movies  a lot.  ROMA is the kind of special film Mom and Dad would go to see at a Hollywood theater -- like a film by Fellini, De Sica, David Lean or Martin Ritt.

ROMA challenges the way we watch films nowadays. It's not an action/fantasy film driven by special effects. It's in black and white. It's subtitled. You must pay attention to the scenes and the characters and the subtlety of the director. To live tweet as you watch this would assure that you'd miss important visual information.  As for Cleo, she is one of those people who can be in your life yet be invisible. She cleans, she cooks, she carries luggage, she cares for the kids, she's constantly going up and down long staircases to do daily chores for the married couple, the children and a grandparent. She has been with this family for quite some time. The kids love her.  She's devoted to them. Yet, in a critical moment, one of the adults doesn't know Cleo's full name, her age or when she was born.

The movie opens with a visual of a diamond-shaped pattern on tile. Water washes over it. It could be water splashed up from a pool at a tropical resort. It's not. It's water from the bucket as Cleo cleans a pathway on the family's property. Notice the water motif in Cleo's story. The water in her bucket. Water puts out a fire. Water breaks. The ocean scene.

ROMA looks like it was shot in 1970. The production design is impeccable. It reminded me of areas in the L.A. of my youth, like downtown L.A. with its large, vibrant Mexican population and areas where I attended Catholic school. I had many Mexican-American classmates and teachers and fellow altar boys as I grew up in L.A.  I could see their faces in Cleo's.  ROMA is a beautiful and memorable piece of work.  I think it will be an Oscar nominee for Best Picture.