I had so much fun watching an old Jack Benny movie that delighted me a lot on local TV when I was a kid.  I had not seen this clever comedy in years, but it still brought the smiles and I even appreciated it more now.  It's clever in how it transferred the extremely popular Jack Benny national radio show. Benny had a well-crafted personality on the show and a cast of regulars. He had a famous "feud" with Fred Allen, the quick wit/writer who had his own radio show. They'd whip out comedy insults about each other on their shows. In real life, they were friends.  Listeners loved their feud. Allen always poked fun at Jack Benny's famous stinginess.  Eddie "Rochester" Anderson was famous as Benny's butler. But their relationship was more like buddies than boss and servant. My mother told me black folks loved that about Benny's show. Rochester was a national radio star. She listened to the show when she was a girl.  Paramount's 1940 comedy with musical numbers is BUCK BENNY RIDES AGAIN. It's a cheerful, polished production that successfully brings radio personas to the big screen.

Rochester was easily the best-dressed and most well-paid black butler in Golden Age Hollywood films.  The old -- and cheap -- car that Jack had with Rochester as his driver is so dilapidated that it just about falls about after a minor fender-bender. Jack is trying to follow a very pretty young lady. (This is the meet-cute in the movie. She's a singer off to audition for a radio show and has no idea he's radio star Jack Benny) He needs to borrow Rochester's car. There's a shot of Rochester's car. It looks like the kind of modern auto Gary Cooper or Marlene Dietrich would've driven in one of their Paramount pictures. It's a shiny deluxe dandy. 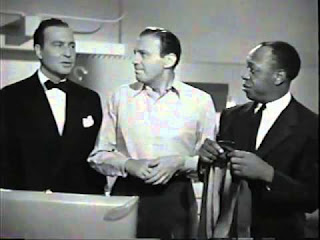 Eddie "Rochester" Anderson gets two musical numbers in this feature. He was quite a nifty dancer and he dances in both of them. His second number has him in a Native American-inspired outfit. The story goes from New York City to Nevada with a sort of art deco/wild west flavor. Edith Head created the costumes. Rochester's costume for his second number is a sexy outfit that flatters his beefcake frame for his tap number.  That's later in the movie. 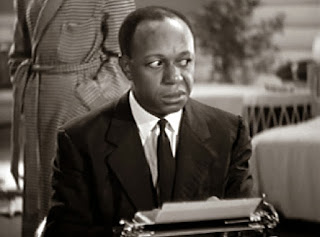 In the first 20 minutes, for the New York City scenes, Eddie Anderson gets to introduce a new Frank Loesser tune with Theresa Harris. Yes, the same Theresa Harris who was "Chico" with Barbara Stanwyck in BABY FACE and the maid to Bette Davis' Julie in JEZEBEL. She looks gorgeous in BUCK BENNY RIDES AGAIN. Jack finds the address of the young lady who auditioned. He has Rochester deliver candy to her apartment. He knocks on the door and it's love at first sight when the lovely maid answers. That pearly sheen of Paramount black and white features in the 1930s is on display here. Theresa Harris and Eddie Anderson get a nice long segment of meet-flirt and song and dance.  I love their sweet, jazzy duet to the song "My! My!" 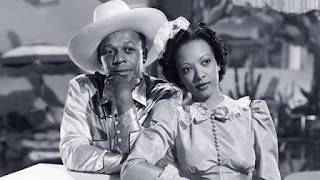 The plot is a feathery one to carry the stars of the Jack Benny radio show in a western dude ranch resort adventure. He falls for a member of a sister act. Paramount's versatile and under-utilized Ellen Drew plays the love interest. Ward Bond plays a villain because --- well, he was in just about every other film made in Hollywood back then. Phil Harris, Fred Allen, Dennis Day, announcer Don Wilson and even Carmichael the Bear made the trip from radio to screen for BUCK BENNY RIDES AGAIN. 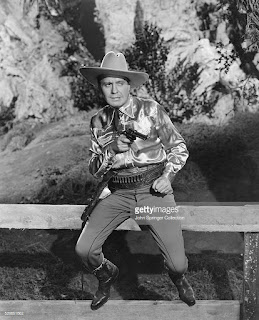 I loved the classy, sophisticated way the two black sweethearts -- Rochester with Theresa Harris as Josephine Templeton -- were presented in this feature directed by Mark Sandrich.

We classic films fans do not talk about or even know about Mark Sandrich they way we do another directors of top movie musicals such as Vincente Minnelli, Charles Walters and Stanley Donen.  Sandrich died young, of a heart attack in his mid-40s.  Sandrich directed Fred Astaire and Ginger Rogers in influential classics that took original Hollywood musicals to a higher level of screen art.  He directed TOP HAT (1935) and FOLLOW THE FLEET (1936), both with original scores by Irving Berlin, and he directed Astaire and Rogers with SHALL WE DANCE (1937), boasting an original score by George and Ira Gershwin.  He also directed Fred Astaire and Bing Crosby in Irving Berlin's HOLIDAY INN, the 1942 musical that gave us the song "White Christmas."  Sandrich had the gift for musical comedy.  He scored with drama too. 1943's SO PROUDLY WE HAIL is one of my favorite WW2 dramas, a movie showing us women in wartime. It's a strong drama with Claudette Colbert, Paulette Goddard and Veronica Lake as military nurses overseas in intense combat zones. Lake had one of her best dramatic outings in SO PROUDLY WE HAIL and Goddard got a Best Supporting Actress Oscar nomination for it.

In 1939, Eddie "Rochester" Anderson played "Uncle Peter," one of the slaves in GONE WITH THE WIND. In 1940's BUCK BENNY RIDES AGAIN, he's dapper and dressed like a Manhattan professional about to be photographed for the pages of Esquire magazine.  BUCK BENNY RIDES AGAIN is 85 minutes of fun the old-fashioned Paramount Pictures way with refreshing images of black people for 1940.