A Lesson in Filmmaking

In New York City, I was seated in a subway car headed downtown back to West 23rd Street. I was on my way home one chilly late afternoon. Two young males were seated directly across from me. They looked in their late teens. Dressed in casual urban attire, talking enthusiastically to each other like so:

"I had no idea all that shit went down. That was real."

I smiled. A broad smile to myself. Hearing their conversation made me happy and it gave me hope. I knew the movie that they were talking about.  I was seated directly across from them on the subway train. I'd been seated a row behind them at the movie. We all had just seen SCHINDLER'S LIST directed by Steven Spielberg. 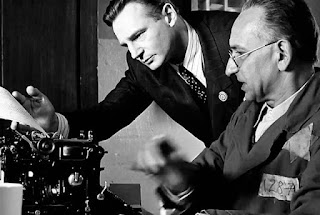 Shortly before the film opened nationwide, I attended a film function in New York City. I was working for WNBC TV at the time. Steven Spielberg was present and making his way through the room. I got to shake his hand and chat with him, a brief exchange that lasted no longer than a minute. I mentioned his film and the current events of the day. He responded that what happened during World War 2 was happening again. We could see that in front page newspaper photos of the ethnic cleansing in Bosnia. This was 1993. We still purchased and read newspapers then.

I wish I could've had that brief encounter with Steven Spielberg after I'd seen the film so I could've told him of the deep impact it made on the hearts and minds of two other black men -- young black men who were not aware of all the horrors of the Holocaust. 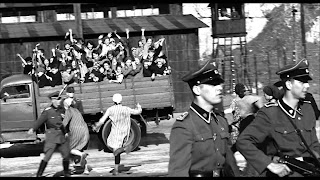 To me, that is the power of film and why I love it so.  It can illuminate and entertain, it also can enlighten and educate. Spielberg's 3-hour film was an education and it told a story, a story based on fact. A story about a real-life hero named Oskar Schindler. Liam Neeson played the Polish businessman and bon vivant who redeems himself by saving Jewish lives. 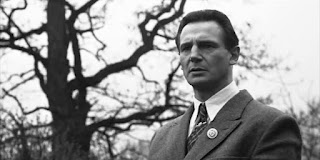 I first learned of the Holocaust through a classic film thanks to my parents in South Central L.A.  I was a youngster. It was a weekend and I heard the TV announcer say that a movie was coming up with Judy Garland in the all-star cast. In those days, THE WIZARD OF OZ got a special prime time network broadcast annually and it was a must-see for all kids. We didn't have VCRs, DVDs or cable then. We couldn't rent movies to take home. We saw THE WIZARD OF OZ once a year.  I knew Judy Garland from that fantasy film and her other MGM musicals that aired on TV. 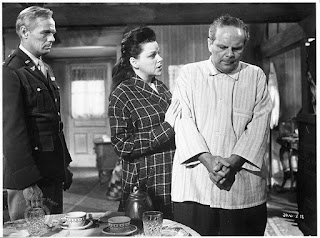 Mom and Dad told me that Judy Garland was grown and older in the movie JUDGMENT AT NUREMBERG and it was not a musical. It wasn't funny. It was a very serious movie about real-life crimes. I could watch it with them. Not by myself. I was in the 5th or 6th grade. They knew the material was way too mature for me. They also knew that some of the newsreel footage in it could scare me like scenes in a horror movie. But they felt I needed to be aware of that history, be aware of that horror that really happened in the world. And I should be aware that people must make sure it never happens again. Never again.  In the movie, it's 1947. Nazis are on trial for war crimes committed. Garland plays a German woman contacted by American officials to testify. She's now a wife in Germany after the war. She had been sent to prison for committing a crime against Germany when Hitler was in power. The crime -- she had befriended a 70 year old Jewish man who was like a very kind father to her. She was 16 when she was sent to prison for being kind to a Jew. JUDGMENT AT NUREMBERG shook me. But I'm glad Mom and Dad persuaded me to watch it with them. 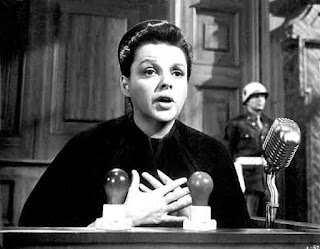 I learned more about the Holocaust from documentaries teachers showed at my high school in Watts.

Steven Spielberg's SCHINDLER'S LIST shook me too. Spielberg's Oscar-winning film is back in theaters to mark its 25th anniversary.  Said Spielberg: "...there is more at stake today than even back then...hate is less parenthetical today and more of a headline...Individual hate is a terrible thing, but when collective hate organizes, then genocide follows..."

Think of the KKK hate that marched through Charlottesville, VA last year.  Think of the shooting deaths at the Tree of Life synagogue in Pittsburgh this year.

Some critics were not pleased with Spielberg's film. I learned that recently listening to AIR TALK on KPCC, an NPR radio station of Pasadena, CA.  During its Friday film review hour, it was mentioned that national critic J Hoberman called SCHINDLER'S LIST "a feelgood movie about a feel bad" event. Hoberman, like a few others, didn't feel the film was gritty enough. This was discussed as critics addressed the 25th anniversary of the film and its current re-release.

Universal was more keen on Steven Spielberg, the most famous and successful American director of our generation, giving what he'd given us before -- big colorful  action and fantasy films that did colossal business at the box office. Films like JAWS, CLOSE ENCOUNTERS OF THE THIRD KIND, E.T. THE EXTRA-TERRESTRIAL, RAIDERS OF THE LOST ARK and JURASSIC PARK.  Hollywood studio executives wanted dinosaurs chasing Jeff Goldblum, not Nazis killing Jews.  But Steven Spielberg made his film. And we paid to see it. And we learned from it.

I know. I sat directly across from two young men who did.

I'm glad SCHINDLER'S LIST is back. People need to see it. Especially some important people in the White House.

After he made SCHINDLER'S LIST, and because of its success with moviegoers, Steven Spielberg started The USC Shoah Foundation:  https://sfi.usc.edu/.