Guilt. The gift that keeps on giving if you're Catholic and follow orders from The Vatican.  I'm Catholic. I was an altar boy. I liked being an altar boy.  However, I had major emotional drama a few years later in high school. I knew all the 10 Commandments. The worst sin one could commit was a mortal sin. That automatically dropkicked your soul down below to Lucifer's lair. Cold-blooded murder was a mortal sin. Then, other things were added on as society matured. We were told that homosexuality was a sin. Sexually, I was still a virgin but I was having definite urges. I wanted to know where my teen soul stood in the eyes of the church. So, one day, in confession, I wrapped up my session with what I thought was a creative way of asking before the priest absolved me and told me to say ten Hail Marys and the Act of Contrition.  I pulled off a "Father, is homosexuality a sin? I'm asking for a friend."  He replied that it, indeed, was.  I asked "How bad of a sin?"  He replied that it's a mortal sin.  I thought to myself, "Damn! If I got hit by a truck and died, my soul could wind up seated next to Hitler's Third Reich just because I went to the movies and got a tingle looking at bare-chested convicts in COOL HAND LUKE. Damn!" Well, the Catholic Church is still at it. 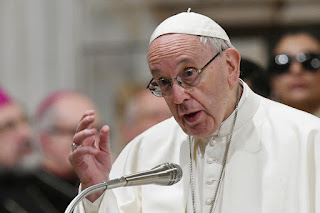 On November 24th, came news. Pope Francis worries that homosexuality has become so "fashionable" that it could "influence the life of the church."  Basically, the church is taking the stand that it needs to weed out gay people.  This position is in the Pope's new book, The Strength of a Vocation, released in Italy. OK. Let's keep in mind that the men in Vatican City who do not want any gay guys in their organization go to work dressed like this: 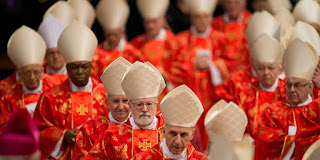 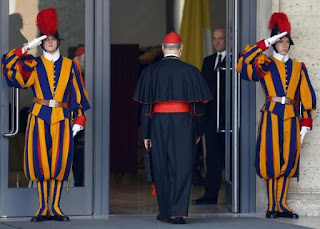 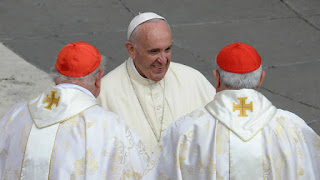 Please. Tell me that those outfits scream, "We're butch and straight as a cop's nightstick!"

Being Catholic is not easy. We're only human. It's tough having a spiritual life in this 21st Century world with some 19th Century Vatican attitudes. So, to help some of my fellow Catholics survive the guilt, click onto this link and watch this commercial called "Pay Your Sins the Easy Way with Sinmo":