First of all, I want to remember the late actress Audrey Hepburn.  It's May 4th.  She was born on this day in history.  She was an Oscar winner, a ballet dancer, a fashion icon and a tireless humanitarian.  She truly left the world a better place.  Audrey Hepburn used her fame to become a bright light in forgotten places.

BREAKFAST AT TIFFANY'S, FUNNY FACE with Fred Astaire, CHARADE with Cary Grant, SABRINA, ROMAN HOLIDAY, TWO FOR THE ROAD and MY FAIR LADY.  Those are Audrey Hepburn classics.  Another one is THE NUN'S STORY.  ROMAN HOLIDAY brought Audrey her Best Actress Oscar.  She got a Best Actress Oscar nomination for 1959's THE NUN'S STORY.  It's the least glamorous of her roles, fashion-wise, during her peak Hollywood years.  Yet my favorite Audrey Hepburn performance is in this Fred Zinnemann drama.  She has a quiet force of feminism as a devoted nun in Europe on the brink of World War 2.  She is a brilliant medical student, the daughter of a loving and prominent surgeon in Belgium.  Sister Luke is a nun more devoted to actively helping people in need in the world rather than following corporate orders of the Vatican and leading a rather passive life behind convent walls.  The nun is determined to get to Africa and help heal the sick and poor in the Congo.  She gets there and puts her skills in action. 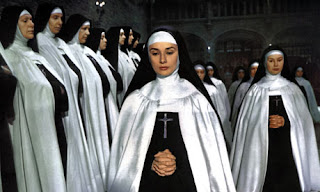 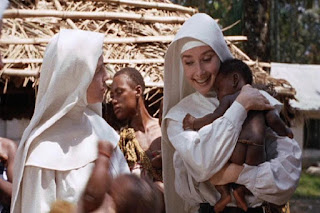 In wartime, Sister Luke will respect and acknowledge the Resistance.

In real life, when he movie star days had been put aside, Audrey Hepburn devoted herself to UNICEF as a Goodwill Ambassador. 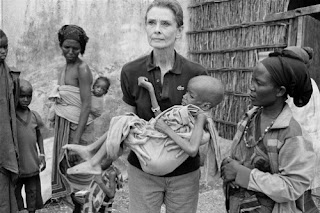 She went to Africa.  She went into impoverished and remote communities, held sick children and helped administer medicine.  Just like Sister Luke in THE NUN'S STORY.  Her movie art became life.  Yes, she was older.  But, to me, she was never more beautiful than when we saw her do this work.  Her spirit of service was an intensely radiant, warm force.  For me, she is a role model. We were so lucky to have had Audrey Hepburn in our lives.  The screen legend died in 1993.

This morning, I was reading the Tweeter feed of respected veteran journalist Bill Moyers.  There was an article on the Trump family.  It featured a photo by Paul Morigi for WireImage.  Taken in the summer of 2014, the family was at a groundbreaking ceremony for a Trump hotel.  The angle of the shot and placement of the four Trumps looked familiar. 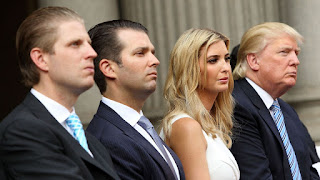 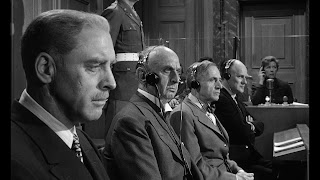 And there you have it.  All the classic films I noted in this post are films I highly recommend that you see.  Enjoy.