I remember seeing this film at a critics screening in New York City.  I was working on Whoopi Goldberg's national morning radio show at the time.  The screening was held in a private screening room, not in a cineplex.  It was not a great film that would generate immediate Oscar buzz, but none of us at the screening rose to leave as soon as the closing credits started to roll because we had tears rolling down our cheeks.  This movie is called BOBBY and it was directed by actor Emilio Estevez with great heart and passion for the slain political figure's message.  The action starts on June 4th, 1968.  All sorts of characters, expensive people and blue collar workers, gather at the Ambassador Hotel in Los Angeles.  That's where Senator Robert Kennedy will score another victory in his presidential campaign and that's where tragedy would strike.  Like his brother, President John F. Kennedy, he would be fatally shot. 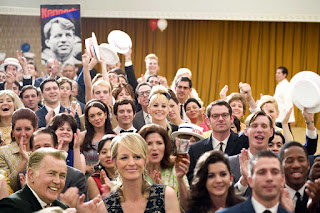 BOBBY is somewhat star-studded and that's the biggest flaw of the film.  You're so busy star-gazing at who's doing a cameo, that it almost gets in the way.  Harry Belafonte, Anthony Hopkins, Laurence Fishburne, Demi Moore, Ashton Kutcher, Sharon Stone, Lindsay Lohan, Helen Hunt and Nick Cannon are in it.  Cannon was given the chance to do a dramatic role and he's very good.  He plays a student, a Robert Kennedy campaign worker, who's from South Central L.A.  John Ridley, one of the few African-Americans to win an Oscar for Best Screenplay (12 YEARS A SLAVE) was a co-producer of BOBBY.  This talented man produced and directed the absolutely gripping and excellent documentary LET IT FALL, the documentary about the build up to and eruption of the 1992 Los Angeles riots.  LET IT FALL aired recently on ABC.  Director Emilio Estevez also had a role for his brother, Charlie Sheen, in the movie.  Even though some of the stories have a soap opera edge to them, you can tell that the cast, like its director, was earnest in approaching this material. 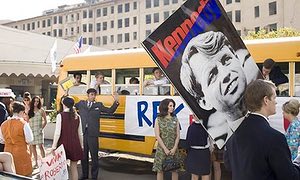 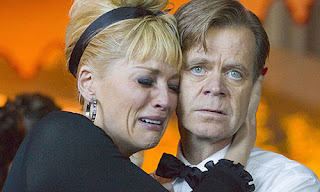 Take a look at this trailer for BOBBY


The movie ends with photographs of Bobby Kennedy as the closing credits roll.  Not just photographs.  We hear his voice.  His distinct, strong voice, comforting voice.  The speech he gives is so passionate, so moving and -- today -- still so achingly relevant that I had tears streaming down my face.  I felt a reverence.  Like I was sitting in church instead of sitting in a critics' screening room in midtown Manhattan.  Bobby Kennedy was very dear to me.  I wanted him to be our president.  I saw him in person two days before he was shot.  That was a magnificent moment.

I'd review BOBBY on Whoopi Goldberg's morning radio show.  As I usually do when I walk into a  private screening room in Manhattan, I looked around to see if there were any other Black folks present.  If I did, I'd verbally greet them or give the respectful nod.  At that BOBBY screening, I was the only Black person in the room.

Ever since the 1980s when ABC, NBC and CBS each had a weekly film critic on their morning shows and when we had syndicated film review show couples like Siskel & Ebert plus the other pairs that followed, the field of film critics on national TV has been a white boys club.  The late Joel Siegel,  longtime film critic for GOOD MORNING AMERICA, was at the screening.  While a few us waited for the elevator and while we were in the elevator going down to the lobby, Joel Siegel held court somewhat telling us that he was a joke writer for Senator Robert F. Kennedy.

I listened.  I stood behind him.  When I heard Senator Robert Kennedy, when he was a living force, and in his words that played at the end of the movie, he spoke of civil rights and equal opportunities. I listened to those words, the only Black man in the screening room and wondering if all those white male film critics ever notice the lack of racial diversity in their own occupational field.  How would Sen. Kennedy have felt about that lack of diversity?

I wanted to say, behind Joel, "When Nick Cannon has that short speech telling about the hope he felt when Bobby Kennedy came to his South Central community, and about all those kids who were running behind Kennedy's convertible to see him speak in their neighborhood park, I was one of those kids."  The movie Emilio Estevez directed did touch me.  That Nick Cannon scene was part of my life. He spoke what I felt as a Black youth growing up in South Central Los Angeles that day, two months after the assassination of Dr. Martin Luther King.

The principal of our parochial high school in Watts dismissed classes a half-hour early so we could all go see a political figure, Senator Robert F. Kennedy.  When our principal made the announcement over the loud speaker, cheers erupted from classrooms as if L.A. had just won the World Series.

That's how I saw Bobby Kennedy in person.