Man, how I would love to meet and interview Goldie Hawn.  Meet, interview and thank her, that is.  On Friday afternoon, heading into Memorial Day weekend, I was channel-surfing and found an old Goldie Hawn comedy just beginning on one of the HBO channels.  WILDCATS was a 1986 release starring Goldie Hawn as a divorced Chicago mother in need of employment who becomes the coach of a football team at an urban Chicago high school.  You all know what "urban" means.  Lots o' black folks.  I remember seeing this movie when it came out.  I had a date.  The audience loved WILDCATS.  It's not a highbrow film and didn't intend to be.  It's a light comedy that made the audience happy.  My date and I laughed and laughed some more over dinner afterwards.  He howled with laughter at the cheerleaders in WILDCATS.  So did I.  He brought the cheerleader scenes up over dinner.  Those memories came rushing been as I watched the movie Friday on HBO. I laughed again at the cheerleaders.  Goldie was cute and funny as the coach.  Cute, funny -- committed and strong.  WILDCATS deserves a second look today.  Look at how it differs from the widely popular Chicago-based teen comedies from John Hughes.  There's wisdom in WILDCATS. 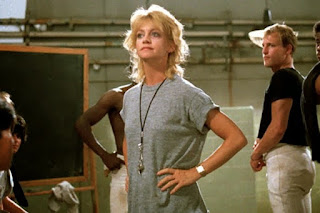 In a teen football comedy, she gave us a story about leveling the playing field in areas of race, gender and even body image.  I wrote "she gave us" because Goldie Hawn was not just the star, she was also the executive producer of the movie.  Hawn plays Molly McGrath.  She's divorced.  She's got daughters.  Her ex-husband is quite the yuppie.  (Remember that 80s term?)  He's someone who represents and takes comfort in "white privilege."  He wants his daughters to transfer and enroll in an upscale, exclusive school.  Molly does not want her kids leading an "over-privileged" life.  As coach, she has to prove himself.  Watching it today, I noticed that a big deal was not made of her being white and the majority of the Wildcats football team is black.  The friction is from the team is gender-based.  Sexist.  And that friction is matched by the macho shithead coach of the rival team.  He says to Molly, "You're a laughingstock.  You're the joke of Chicago and you don't even know it."  However, in his case, he's not just referring to her.  He means her predominantly black team too. 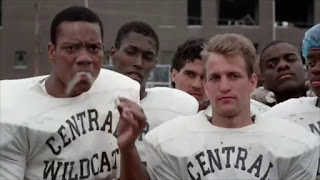 The polite concern from her ex-husband is yuppie racism.  He's concerned because she's works in the "inner city" and his daughters may be exposed to that environment.  Molly may not have noticed the subtle racism during the marriage but she sees it now.  She works hard, digs in and challenges the tough-talking teen dudes on their sports sexism.  They come to respect her as their coach. 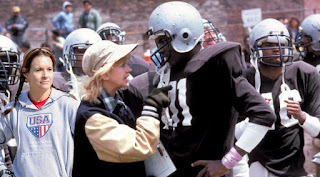 The guys on the team are a cast of characters.  Of course.  That's to be expected in a comedy like this.  Molly is not exactly street smart.  However, she shows no fear about driving alone to a predominantly black neighborhood to find a student.  The team finally wins a game.  She throws a victory party at her house.  There are the black, Hispanic and white football players...and their dates...in her house interacting with her kids.  Also, you didn't just see that racial diversity on the school's football field.  You see it in the classrooms.  The smart, respected and open-minded principal of the high school is played by a black performer -- comedian/actor Nipsey Russell. 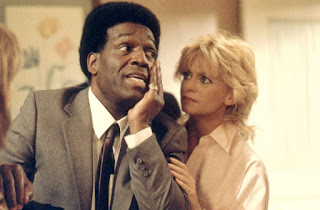 Compare that to the John Hughes high school teen comedies of the 1980s also set in the Chicago area.  Can you think of African-American lead or top supporting characters in a John Hughes teen comedy set in high school?  Think about 1984's SIXTEEN CANDLES with Molly Ringwald.  In a way, director/writer John Hughes was to Molly Ringwald what Vincente Minnelli was to Judy Garland.  He seemed to distill the young lady's onscreen essence and got the best out of her.  He elevated her stardom. 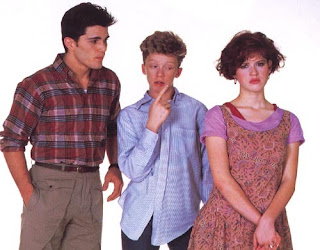 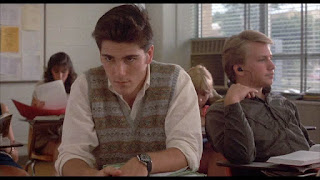 The only ethnic student in that movie is the Asian kid with the cringe-inducing name "Long Duk Dong." Gedde Watanabe, a good actor, had a role that was basically an ethnic joke. 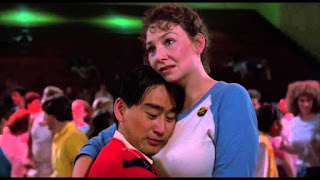 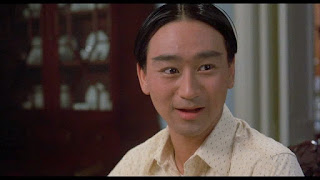 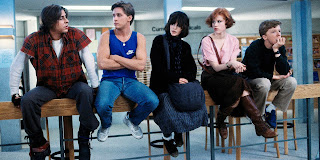 Then there's the 1986 hit, FERRIS BUELLER'S DAY OFF.  Reportedly, Hughes wanted this teen comedy to be his love letter to Chicago.  Again, no lead or supporting roles for young African-American actors.

I spent a lot of time in Chicago, especially during the 1980s.  I was there for work, auditions and leisure activities.  The John Hughes teen comedies were entertaining, but they sure didn't reflect the Chicago area that I knew -- or the Chicago we saw in the weekday audiences of Oprah Winfrey's daytime show with studios in Chicago.

Even in today's age of "Oscars So White" and Hollywood's obvious need to step up its diversity and inclusion game, WILDCATS feel fresh in its details.  There's one big, portly African-American student who's a bookworm.  He loves science yet he's also hip.  His name is Finch.  Compare Finch to Long Duk Dong in SIXTEEN CANDLES.  Finch is smart and hefty.  Before the film ends, he'll suit up for football action.  Finch likes to make money.  Here is a black Chicago high school student who has photos of three famous people in his locker -- Marvin Gaye,  Chrysler CEO Lee Iacocca and Albert Einstein.  That visual gave my heart wings when I saw it.  An inner city black kid with those three photos in his locker.  And his character is not presented as a "dork" or a "geek."  He does well in the classroom.  The players see him not as "the fat guy," but as a possible asset to the team.

There's a full-figure African-American female student.  In a mean girls teen comedy made 20 years later, a girl built like that would've been ridiculed by bitchy slim girls.  But in WILDCATS, she's the cute girl.  She's the romantic interest of one of the Wildcats.

There's a nice soul to WILDCATS.  The diversity is not all spelled out.  You're given credit for having the brains to see it for yourself.  I loved how, as the seasons progresses, the bleachers go from a having a handful of fans to being filled with spectators both black and white.

And the cheerleaders are an absolute hoot!  It's a small cheerleader squad, but those girls can git down! 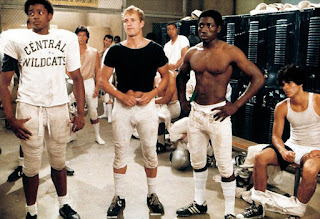 Coach Molly stands up for her team and for  her motherhood.  She goes to court to keep custody of her kids.  She's determined to be a strong example for her daughters.  And there's no romantic interest for her as a single mother in this film.  She's independent and never whines about being lonely.

WILDCATS made me laugh again all these years later.  I appreciated the race/gender diversity and inclusion more now than I did back in 1986.  It's still relevant.  I'll take the Wildcats over Ferris Bueller any day. 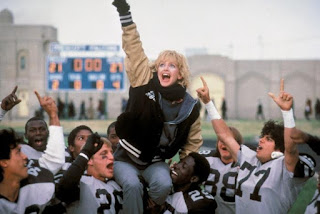