Love Me Some MASTER OF NONE

I would love to sit and eat pasta with Aziz Ansari.  I am a major fan of his going back to his "Treat yo' self" days on the NBC sitcom PARKS AND RECREATION and his cameo in the sci-fi, end of the world apocalypse comedy THIS IS THE END.  Aside from being a fan, I am so proud of him and grateful for the trailblazing he's done with MASTER OF NONE.  His shows reflect the diverse, multi-cultural world that I know as a person who was a kid in South Central L.A. and a man who lived in New York for twenty years. Aziz acts, directs and writes for MASTER OF NONE. He gives me a reflection of my world and my sensibilities that I didn't often see on mainstream network TV and movie screens. I love Aziz Ansari as Dev, a New York actor, on Netflix's MASTER OF NONE. 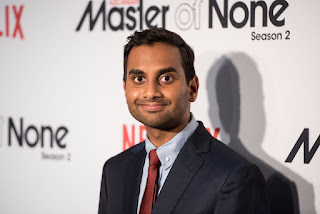 Lord knows I'm old enough to play Dev's father or an uncle on the Netflix series, but I can totally identify with this young Indian dude pursuing a career in the entertainment industry.  If you saw Season 1, remember the audition when the white casting person wanted him to sound "more Indian," like Ben Kingsley in GANDHI?  That was so like actor auditions I've had in New York City when folks wanted me to sound "more urban" and when TV executives as white as Casper the Friendly Ghost felt I wasn't "black enough" for a show.  That always meant I was "too articulate."  Career, family and romance.  Watching Dev deal with the social and emotional curveballs thrown at him in those three fields is great entertainment.  Pencil-thin Dev gets through it all with advice from friends like Denise the Black lesbian and his big huggybear of a buddy, Arnold (played by Eric Wareheim). 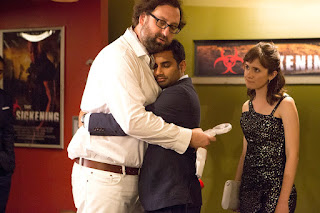 If you love Vittorio De Sica's classic, THE BICYCLE THIEF, you will love the Season 2 opener of MASTER OF NONE.  If you've seen that 1948 Italian film, you will appreciate this episode even more. 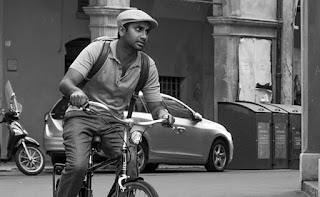 Dev goes to Italy.  He speaks a lot of Italian in this opener, so much of the episode is subtitled.  He makes pasta, talks to the locals and something of his is stolen while he's with a little friend. Dev needs a bicycle. 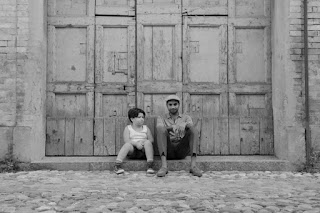 It's a wonderful episode.  It's obvious that Aziz Ansari has seen De Sica's THE BICYCLE THIEF.  The first episode is in black and white and color, English and Italian.  We're still in Italy for the next episode and it's obvious the Aziz is familiar with the 1961 Antonioni classic film, LA NOTTE.  It's referenced in LE NOZZE, an episode that brings Arnold to Italy for a wedding.  Before the ceremony, Dev and Arnold must eat and talk. 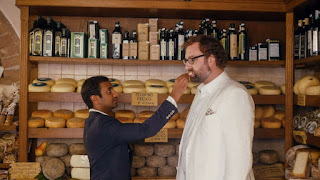 I loved this episode too.  Arnold's ex-girlfriend, a woman he was with romantically for about 10 years, is getting married.  She's marrying a man who resembles Arnold.  Like an Antonioni film, architecture is very important.  Here, it's the human architecture -- two men who look like they should be brothers.

The next episode is called RELIGION.  Another winner.  Dev's parents are in this one!  Fabulous.  I was hoping Dev's parents -- who are really Aziz's parents -- would be back for the second season.  This episode is very funny and gives you some Hindu realness.  It's about religion and its rules, rules that may not make a whole lot of sense when you really think about it.  I'm Catholic.  We were forbidden to eat meat on Fridays.  So, when I was a kid, I was basically taught that if I ate a cheeseburger on a Friday, crossed the street and got hit and killed by a truck while I was headed home from the burger joint, my soul would go straight below and I could be seated next to officers from Hitler's Third Reich.  Simply because I ate a cheeseburger on a Friday.

That episode not only made me laugh, it made me want to send out for some barbecue pork ribs.  That's all I'm sayin'.  I am so grateful to the crew for the wit and wisdom of these shows. 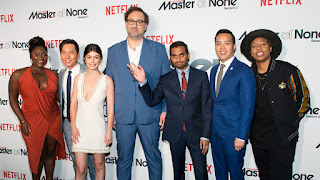 There's Alan Yang standing to the right of Aziz, wearing a blue suit.  I highly recommend this second season.  Sharp, clever, original and funny.  Check out MASTER OF NONE on Netflix. 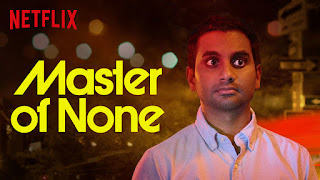