If you're up for a double feature movie rental with a bit of a theme to it, I've got an idea for you.  The first one comes from director Frank Capra, the man who gave us IT HAPPENED ONE NIGHT, MR. SMITH GOES TO WASHINGTON and IT'S A WONDERFUL LIFE.  It's from the 1930s, during the Great Depression here in the U.S., and that financial hardship is reflected in this comedy/drama.  It stars Gary Cooper and the marvelous actress who was the muse to James L. Brooks when he wrote the role Holly Hunter played in BROADCAST NEWS.  Gary Cooper and Jean Arthur star in 1936's MR. DEEDS GOES TO TOWN. 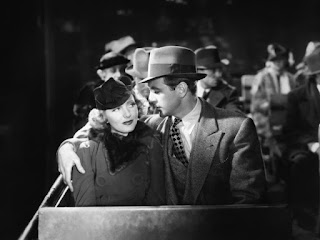 The film opens with a lone car speeding on a highway.  It speeds out of control over a bridge and the person in it is killed. The person was a multi-millionaire and his fortune goes to a tall, young, handsome, tuba-playing relative in a small town called Mandrake Falls.  From Mandrake Falls, Longfellow Deeds has to relocate to Manhattan where a bunch of shady executives think he's just a simple-minded hick.  They think they can easily weasel the fortune away from him.  Wrong.  He's like a big kid in the Big Apple but he's no chump.  He is, however, a huge story for some newspaper to scoop.  Meet Babe Bennett, a Pulitzer Prize-winning newspaperwoman who's the smartest guy in the newsroom.  She'll assume a fake identity to meet the millionaire, get the exclusive story on him and scoop all the other papers in town.  You guessed it.  He'll fall in love with her -- not knowing she's a reporter -- and she'll fall in love with him -- knowing she'll have to reveal herself and deal with the romantic consequences. 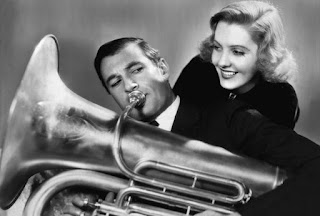 Jean Arthur was one of the best and brightest female stars of the 1930s and 40s.  One whose popularity continued for decades.  She was also one of the shyest stars.  In the early 1950s, she was such a dramatic hit as the gun-hating frontier mother in SHANE, that Paramount Pictures wanted her to do three more films.  But she decided to make 1953's SHANE her last film.  In 1966, she starred in THE JEAN ARTHUR SHOW, a CBS sitcom.  It lasted only one season, but heck...not bad for someone who started her career in the silent film era of the 1920s.  In the early 1970s, she was still getting film offers.  Jean Arthur stayed retired from films and taught at Vassar.

In the 1956 drama, GIANT, actor James Dean did a piece of business looping a small rope while a rich rival tries to screw him out of some ranch property he owns.  Property that's way more valuable than the lowly ranch hand realizes.  A number of film critics wrote about young Dean's acting brilliance doing that casual rope bit in that office scene.  Well, those critics -- all men -- missed that Jean Arthur went there before James Dean did.  Notice her first scene in the movie as she listens to her newspaper boss give orders. 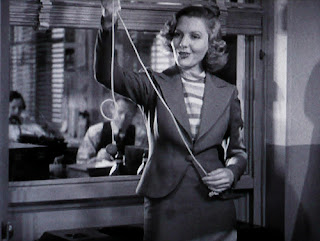 In another scene, Babe and her boss are discussing how to get the exclusive on the young millionaire.  Babe is doing a trick with a 50 cent piece.  Notice that, during the trick, she drops the coin.  That drop doesn't seem like a rehearsed, scripted move but Jean Arthur looks under the seat cushion for the coin and goes on with the dialogue in the most natural way.  She was terrific. 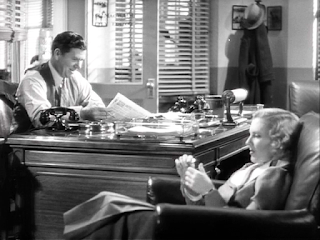 Mr. Deeds came into a $20 million fortune and a palatial Manhattan residence.  The newspaper proclaims him "The Cinderella Man."  Deeds has no idea how his innocent escapades with his sweetheart Mary (reporter Babe Bennett) wind up in the paper with photos, but he continues his carefree new life as a millionaire.  Then, a man hit hard by the Great Depression makes his way into his palatial home with a gun.  Poverty has infected him like a disease and made him a desperate madman.  He can't find work.  His wife and kids go to bed hungry.  And he's read that this Deeds had fun by feeding donuts to a horse.  Those horses are eating and that poor intruder's family isn't.  The man is hysterical but he comes to his senses before he hurts anyone.  He's sorry for what he's done. 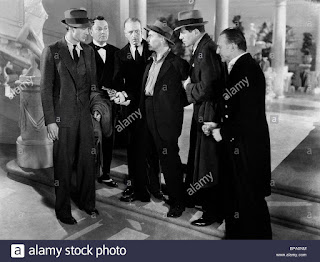 It's a strong, critical scene.  Deeds will be moved by the man's pain and desperation.  Deeds will feed him and employ him.  The experience has such a profound effect on "The Cinderella Man" that he uses his wealth to help other men knocked down and out by the Depression. His compassion and his helping hand to his fellow American threatens the fat cat execs who greedily wanted his money.  The wealthy "Cinderella Man" who selflessly helps the poor will have to go to court to prove his sanity.  This is a definite Capra classic.  To me, Capra was like the Charles Dickens of Old Hollywood.

Pair that classic with a Ron Howard film from 2005.  Howard directed CINDERELLA MAN starring Russell Crowe and Renee Zellweger.  Based on a true story, the action is set in the 1930s...just like Capra's tale about a "Cinderella Man" in MR. DEEDS GOES TO TOWN.  Russell Crowe, in one of best American screen performances, plays a working class family man hit very hard by the Great Depression.  He could be like the poor guy with the gun in Capra's film. 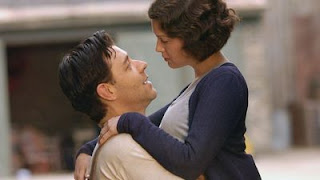 Crowe plays James Braddock, a former boxer getting any day laborer work he can to support his New Jersey family.  Before Braddock was forced to quit boxing due to an injury, he had a most loyal and trustworthy manager named Joe Gould.  Gould is played by Paul Giamatti.

Gould presents Braddock with one more chance to box.  Mrs. Braddock (Zellweger) doesn't want him to box and thinks Gould is just out to make a buck.  She's wrong.  Braddock could win money to feed his family again.  With Gould's help, he has a shot at the heavyweight championship.  His opponent is the formidable and cocky champ, Max Baer.  A top sportswriter dubs Braddock "The Cinderella Man." 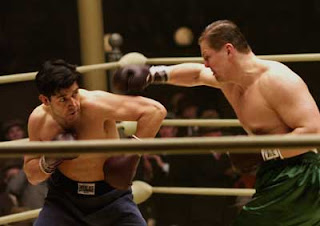 Braddock comes to represent every guy who got knocked down by hard times and dared to get up and keep punching.  There is a lot of heart without sappy sentimentality in this movie.  Braddock takes the blow in the ring because he loves his family and do what he can to take care of his family.   Of all the films directed by Ron Howard, this is one of my favorites.  Click onto this link and see a trailer:
https://youtu.be/nyuri18gwdM.

I like Renee Zellweger.  But in CINDERELLA MAN, I think I would've gone with a Naomi Watts or Julianne Moore -- someone who could play the wife with a touch more kitchen sink gravity

There you have it.  I hope you enjoy the CINDERELLA MAN double feature.