A virginal woman.  A man who's had a hard knock life.  Both are surrounded by a enormous mass of water.  In that water approaches an evil World War enemy.  The man and woman will bond.  Director John Huston gave us those elements in 1951's THE AFRICAN QUEEN starring Humphrey Bogart and Katharine Hepburn.  Both stars were nominated for Oscars.  Bogart won for Best Actor, the second of his three career Oscar nominations.  Huston also gave us those elements in a film that doesn't get any mention when folks discuss the John Huston film canon, but one I recommend.  Robert Mitchum and Deborah Kerr star in John Huston's 1957 action drama called HEAVEN KNOWS, MR. ALLISON.

Just like THE NIGHT OF THE HUNTER, this is a film that shows how remarkable an actor Robert Mitchum was and leaves you stunned that he received only one Oscar nomination in his long, impressive film career.  That was Best Supporting Actor Oscar nomination early in his movie career for 1945's STORY OF G.I. JOE.  Like that film, HEAVEN KNOWS, MR. ALLISON is a story set during World War 2. Mitchum plays a Marine survivor at sea who lands on an island in the Pacific.  Deborah Kerr plays a nun, the lone survivor on that island when he arrives.

I'd seen this movie before on TV but I had not seen it in a few years.  I saw this it's one Netflix and I watched the CinemaScope, DeLuxe color, 20th Century Fox production over the weekend.  Wow.  Mitchum was a very popular movie star but, man, was he one under-rated actor!  He and Deborah Kerr as so good together, so natural in their fully committed performances that there are moments when it seems the scenes were spontaneous, like they're not acting at all.  He's at his movie star peak in this film.  He's great to look at.  That man is one prime hunk o' beefcake in HEAVEN KNOWS, MR. ALLISON.  And Mitchum was cool without trying to be cool.  It was just part of his being.  Like breathing.  I think that we moviegoers were often so caught up in his coolness that we didn't really see his expert acting.  His skills were so fine that they were almost subliminal.
When the Marine is marooned on that Pacific island, the first thing he sees is a crucifix.  One is at the head of a grave.  Another is at the top of a small chapel.  A third is worn by Sister Angela.  He's not a religious man but he respects hers.   Keep in mind the story takes place at a time when Irish Catholics had been treated like second-class citizens in America.  They must keep in hiding because the Japanese will invade the island.  Sister Angela has not yet taken her final vows.  As they survive on the island, she will learn from him and see for herself that war is hell.  From her, he will learn about virtue and faith.  Even though he's survived and will again be surrounded by the evil enemy in wartime, with Sister Angela he will find a peace in his heart that he's rarely known.  She will learn that she could have love and happiness and still be devoted to her Catholic faith if she chooses not to take her final vows.  The slight but noticeable breeze of mature sexuality in HEAVEN KNOWS, MR. ALLISON is very subtle and very well-played.

Did you see Audrey Hepburn in ROMAN HOLIDAY?  Remember the press conference that the young princess holds near the end of the story?  A journalists asks a question and she sincerely answers, "I have every faith in it...as I have faith in relations between people."  Well, HEAVENS KNOWS, MR. ALLISON is about that very kind of faith.

Mitchum's character calls himself "a big, dumb guy" who is "Marine through and through."  Listen to him.  He sounds different than he did in the film noir classic OUT OF THE PAST, in HIS KIND OF WOMAN with Jane Russell, as the psychotic killer preacher in THE NIGHT OF THE HUNTER, as the Australian sheepherder family in THE SUNDOWNERS with Deborah Kerr or as the billionaire playboy in the satirical comedy WHAT A WAY TO GO! with Shirley MacLaine.

After I graduated from Marquette University in Milwaukee, I stayed there instead of going back home to L.A. to find broadcast work.  I find it there soon after graduation.  I lived and worked in Milwaukee for ten years.  The Marine is a man who grew up in Milwaukee.  As a baby, he was left at a Milwaukee orphanage.

As soon as his character revealed that, I went "Wow.  Mitchum was great."  Robert Mitchum does an accent I heard for years especially from Southside Milwaukeeans when I lived in that city.  It's an actor's detail I never saw or heard mentioned in reviews, but it's there.

HEAVEN KNOWS, MR. ALLISON was good Saturday night entertainment.  If you're a Robert Mitchum fan and you've never seen this one, check it out on Netflix.  His talent deserves re-appreciation. 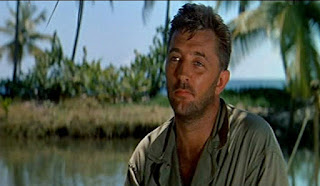