On my recent trips to the cineplex, I bought tickets to see smaller films about real people.  The Hollywood major studio assembly line of overblown comic book superhero sequels had overwhelmed and exhausted me.  All those big budget movies with the extreme special effects and the impressively muscled men flying through the air and kicking villainous ass struck me as the same sausage being cranked out and served on different, more decorative plates.  It's still the same old sausage.  After a while, they all seemed the same.  That's why movies like MOONLIGHT, HELL OR HIGH WATER and HIDDEN FIGURES were like a balanced meal with wine after a steady diet of sugary snack treats.  Also, the big comic book superhero adventures were all lead by men with big biceps.  This season, the one superhero movie I am eager to see puts a female in charge.  WONDER WOMAN has finally made it to the big screen. 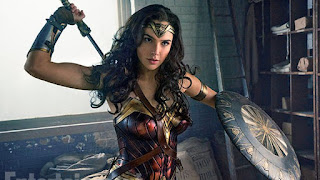 OK.  The fact that WONDER WOMAN finally got a movie deal is right up there with us finally seeing an African-American woman on ABC's THE BACHELORETTE who is being wooed by an interracial group of men.  I know history is being made on the TV show and the network is patting itself on the corporate back...but, please.  We're over fifteen years into the 21st Century.  We had President Barack Obama in the White House for two terms.  High time we got an African-American bachelorette or bachelor.  In fact, it should've already happened. 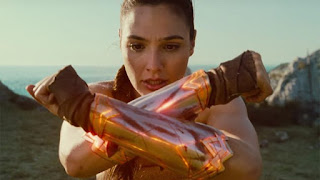 The same applies to Wonder Woman on the big screen.  Superman, Batman, The Incredible Hulk -- each had a popular TV series and each made it to the big screen.  Wonder Woman was played by Linda Carter in a popular 1970s TV series.  But the big boys who run Hollywood apparently didn't think she could carry a movie.  She was strong and, to them, a cute pretty little thing to keep on the small screen.  That's how it seemed. 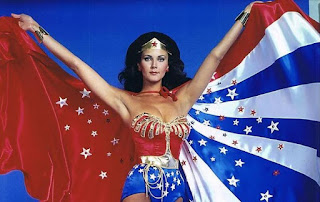 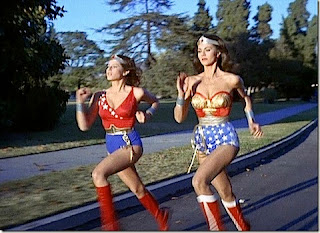 I know jack-shit about The Green Lantern.  But Ryan Reynolds got a green light to play THE GREEN LANTERN in a 2011 movie.  No big screen close-ups for the popular Amazon warrior princess, though.  I feel there was Hollywood sexism in her lack of big screen exposure.

Well, WONDER WOMAN is here now and the movie was directed by a woman -- Patty Jenkins.  She directed Charlize Theron to a very well-deserved Best Actress Oscar win for 2003's MONSTER.  Jenkins also wrote the MONSTER screenplay.  In that, Jenkins looks at the dark side of female power and femininity in this story about real life serial killer, Aileen Wuornos.  Note:  Look up news footage of Aileen Wuornos and then watch Theron's uncanny recreation in MONSTER.

Gal Gadot plays Diana Prince also known as Wonder Woman.  Besides Patty Jenkins as director, another reason why I want to see WONDER WOMAN is that she cast Chris Pine as the leading man.  From what I've seen in clips, she embraced his keen comedy side. 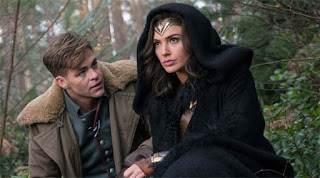 I watched Chris Pine be serious in STAR TREK movies and UNSTOPPABLE and saw him as a drop dead handsome young dramatic actor.  Then came news that, due to scheduling conflicts, he replaced Jake Gyllenhaal as Cinderella's Prince Charming in Disney's film version of the Broadway musical INTO THE WOODS.  After the preview screenings for critics, our main buzz was "Wow!  Who knew that Chris Pine could sing?  And really well!"

Then, in 2015, I attended an "upfront" for a TV outlet.  "Upfronts" are held to promote a TV show's or a network's new season.  It's a publicity party.  This one for Crackle was held in Manhattan's City Center theater close to Carnegie Hall.  The presentation included clips for the upcoming product.  The upfront ended with outtakes from a new animated series.  Chris Pine was the voice for one of the characters.  The montage of Chris Pine clips was so hilarious that press people who were headed up the aisles to leave stopped and stayed to watch and laugh.  Chris Pine ad libbing was like early Robin Williams funny.  So now I'm thinking..."He's handsome, he can sing...AND he's funny."

After that came HELL OR HIGH WATER, one of the best movies of last year.  In fact, it was an Oscar nominee for Best Picture.  Chris Pine is excellent as the bank robber in that drama.  He's just so talented and handsome that I could easily hate him.  But I don't.  Here's a trailer for WOMAN WOMAN.
I am very ready to see this action/adventure.  I'm glad she's here.  I hope WONDER WOMAN has a wonderful time at the box office.  In the field of big screen comic book action hero adaptations, WONDER WOMAN and director Patty Jenkins have shattered a glass ceiling.
at May 30, 2017