Shots in THE NIGHT OF THE HUNTER

Furious. That's how I felt in my teens when I read in magazine articles that clueless film critics were so mean in their unfavorable reviews for 1955's THE NIGHT OF THE HUNTER that first time director, renowned film actor Charles Laughton, never directed another film.  To me, those critics caused a great loss to the art of American cinema.  When I was a kid, THE NIGHT OF THE HUNTER aired frequently on KTTV/Channel 11, a local independent station in Southern California.  Being a Catholic kid who'd done his time in parochial schools, I could quickly see that THE NIGHT OF THE HUNTER was like a simple, yet scary Bible story.  The scary thing about it was the human wolf in sheep's clothing -- the twisted killer pretending to be a preacher.  When I was a boy, I felt this movie was something very special.  It moved me.  Robert Mitchum is remarkable as the wolf. The effortless, potent sexuality he exuded in other screen performances is inverted here.  He's an impotent murderer who did jail time and was released. 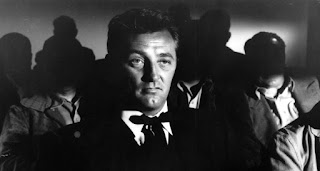 Charles Laughton gave us one of the most memorable villains of 1950s American cinema in Rev. Harry Powell, the deranged religious fanatic with the words "love" and "hate" inked on the backs of his fingers.

It's hard to believe that Robert Mitchum received only one Oscar nomination in his long, impressive screen career.  And that was in the Best Supporting Actor category early in his screen career.  One of the biggest stars involved with THE NIGHT OF THE HUNTER was someone we never saw -- cinematographer Stanley Cortez.  Mr. Cortez was the brother of popular 1930s leading man movie star Ricardo Cortez. Both were a couple of Jewish guys from New York City who changed their last name to Cortez for more showbiz appeal.  Their real last name was Krantz. Cinematographer Stanley Cortez also worked on Orson Welles' THE MAGNIFICENT AMBERSONS (1942) and SINCE YOU WENT AWAY (1944) starring Claudette Colbert and Jennifer Jones.

THE NIGHT OF THE HUNTER is a low-budget work of art, somewhat of a Christmas fable that ends at Christmastime.  Today, I wish that this tale of a little country boy and sister fleeing from a evil force would get an annual network airing like IT'S A WONDERFUL LIFE and THE TEN COMMANDMENTS. 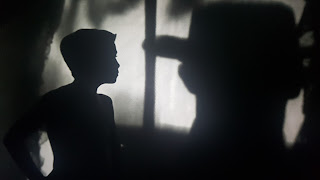 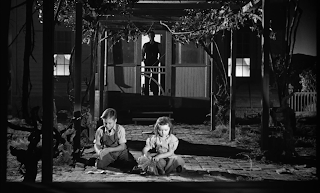 What Cortez does with light and shadow is brilliant and it adds texture to the characters.  It's reminiscent of German expressionism from the silent film days of the 1920s.  Young John Harper protects his little sister.  They've lost their father and evil Harry Powell believes they know where a large sum of money is hidden.  He will kill to get that money.  He has a very distinct way of dressing and young John is always on the alert that he and his sister are being followed.  Harry's instrument of murder is the switchblade knife that he always keeps in his pocket.  It's his phallic symbol. 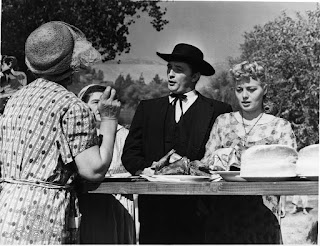 Harry snakes his way into the life of the children's sweet young widowed mother played very well by Shelley Winters.  The money he seeks may be in her house.  He stridently uses religion to shame her for her sexuality on their sexless wedding night.  He sees a woman's sexuality as wicked. He misuses religion to control her behavior.  He must get her out of the way so he can work on the kids.  His fanatical religion robs her of her personal power. She submits to him like a religious martyr making a sacrifice.  Notice the angles of the interior set design.  The cinematography makes their bedroom look like the inside of a church with its arches.  It also looks like the blade at the end of his knife. 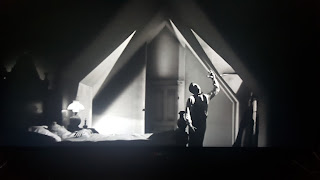 Look at the light on his wife.  She looks like a saint in a holy place.  Again, the light looks like a church arch or the blade at the end of Harry's knife. 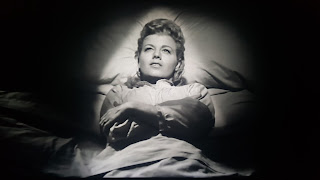 She's a small, petite, older figure but Rachel Cooper is one of the strongest females in a 1950s film.  And she's played beautifully by Lillian Gish, an actress who had been a film star since 1915.  Rachel Cooper boards and protects homeless children.  She uses the Holy Bible to teach tolerance and kindness.  But don't think that she's fragile.  She will use her shotgun to keep that evil force away from those children. 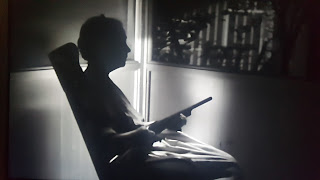 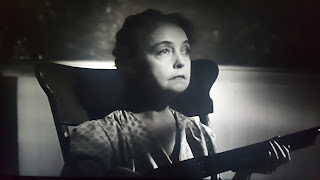 The images here are like gorgeous famous photographs hanging in an art museum.  Lillian Gish was a star in D.W. Griffith's racially controversial hit film, THE BIRTH OF A NATION.  She worked consistently from the silent film era into the sound era and into the age of television.  She got one Oscar nomination -- in the Best Supporting Actress category for DUEL IN THE SUN (1946).  Her last lead role in a film was in 1987's THE WHALES OF AUGUST.  She did receive a special achievement Oscar in the early 1970s.  She should've gotten an Oscar nomination for THE NIGHT OF THE HUNTER.  Stanley Cortez should've received an Oscar nomination for his masterful black and white cinematography.

The big, glossy, soap-opera LOVE IS A MANY-SPLENDORED THING starring Jennifer Jones as the Asian doctor in Hong Kong who falls in love with a white American journalist played by William Holden was a nominee for Best Picture.  I love the lead actors but I would've replaced that nominee with THE NIGHT OF THE HUNTER.  If you can, watch it and see for yourself.  It's excellent. 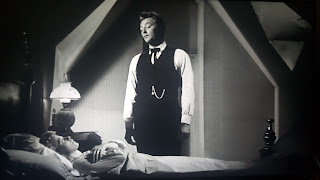 One can only imagine what other directorial achievements might have come from Charles Laughton if film critics at that time had possessed some artistic vision, been supportive of his new craft.  As for Mitchum, he got his Oscar nomination for 1945's THE STORY OF G.I. JOE, a war film.  He really hit big with his lead role in the 1947 film noir classic, OUT OF THE PAST.  He was very popular but, artistically, not as appreciated as I feel he should have been.  Robert Mitchum didn't just have an easy masculine coolness that young male hipsters wish they could acquire, he had an acting range that was so good it was almost subliminal.   Check him out in the 1959 western THE WONDERFUL COUNTRY, THE SUNDOWNERS co-starring Deborah Kerr, HEAVEN KNOWS MR. ALLISON also co-starring Deborah Kerr, 1962's CAPE FEAR and the 1963 mystery THE LIST OF ADRIAN MESSENGER.  And I defy any kale-eating, gluten-hating, manbun-wearing, long-bearded hipster to be anywhere near as cool as Robert Mitchum was simply walking through Manhattan in a business suit during the opening credits of TWO FOR THE SEESAW, a 1962 romantic drama co-starring Shirley MacLaine.  Robert Mitchum was one gifted actor -- and absolutely brilliant in THE NIGHT OF THE HUNTER. 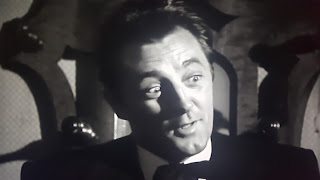