Thanksgiving with MASTER OF NONE

You know Denise, Dev's lesbian friend, if you followed Season 1 of MASTER OF NONE.  That's the fresh and fabulous series created by and starring Aziz Ansari.  On this Netflix series, he plays Dev.  Dev is a young Indian dude, a Muslim, and an actor in New York City. 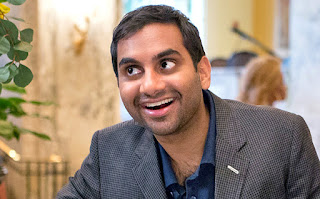 Season 2 kicked off with Dev in Italy on vacation and learning how to make pasta.  Dev returns to New York and we see that he has a job as host on a Food Network-type channel.  He hosts a pastry competition show.  Dev does a lot of eating in Season 2, but I don't recall him wanting to eat any of those cupcakes.  The Thanksgiving episode, to me, is an instant classic.  I loved it.  I've lived it.  It covers the friendship of Dev and Denise who've been friends for most of their lives.  They're like brother and sister. 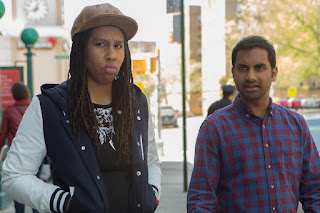 In the Thanksgiving episode segments, Denise comes out to Dev -- and to her mother.  Her mother is played by Angela Bassett. 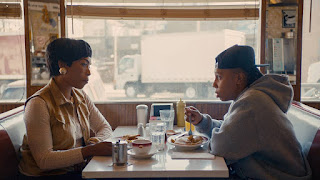 Before I get to that, let me tell you again why I love MASTER OF NONE -- especially its current second season.  I lived and worked in New York for over 20 years.  I did several years working on local morning news programs which started at 6:00.  Mass transit was my way of getting to work and my hours had me on subway trains between 4:00 and 5:00 in the morning.  I wouldn't be the only one heading to work in the "before the chickens wake up" hours.  The seats would be filled with other commuters.  People of all colors, shapes, ages and smells.  We all had one thing in common -- our income level. That level was "barely getting by."  (Yes, I did work on local TV but, truthfully, I could have made more money annually as a dental hygienist or a postal employee.)  Those other folks are the doormen, janitors, cooks and other kitchen crew in the local diners, the cleaning women, delivery people and others who work hard and become invisible on a daily basis.  But they're the ones who are at work by the crack o' dawn to keep the city running so that upscale white folks like that female quartet on SEX AND THE CITY and the two couples on WILL & GRACE can have Manhattan as their playground.  If it's cold and snowy outside and they want to stay indoors where it's festive and warm, those upscale types send out for food.  Aziz focuses not on the people who sent out for food, but on the life of the person making the delivery.  I love that about this Netflix series.

The Season 2 episode "New York, I Love You" is like a valentine to the New York City I know.  Dev, Denise and Arnold are on their way to a movie.  Arnold mentions that he's heard it has a great surprise twist at the end.  Dev and Denise are irritated.  Arnold didn't tell them the ending but they'll be expecting a surprise twist because he mentioned it.  THAT broke me up laughing.  I will not mention a surprise twist when I'm reviewing a movie for that very reason.  In fact, I have blocked people on Twitter who have revealed the surprise ending of movies simply because the films are over 20 years old and the blocked Twitterers felt those old endings were fair game.  From the trio's movie talk, we meet an apartment building doorman and a privileged resident who obviously thinks all Latino, doormen on the staff look alike.  We go on to meet an interracial couple having problems with its sex life.  She's black. He's white.  She's a shop clerk, deaf, and they both sign.  We meet an African cabdriver who lives with other African guys and they all want to go out for some nightlife.  A little wackiness ensues.  But they wind up in Chelsea, get some late night fast food and meet some friendly young black women.  They meet them in a fast food joint.  A roommate of the African men works there in the kitchen.  What gets mentioned in conversation?  The movie Dev, Denise and Arnold were talking about at the top of the episode.

This is the real New York.  It's the multi-cultural, multi-racial New York City that Woody Allen still refuses to reflect in his movies after all these years.

The "Thanksgiving" episode.  That one deserves Golden Globe and Emmy nomination attention.  Inspired by the real life story of Lena Waithe, the MASTER OF NONE actress who plays Denise, we go back to the early years of the little Denise and little Dev friendship to see where the bond began and what holds it together.  Through of number of Thanksgiving dinners over the years, we see them grow up and we see her mother grow into dealing with the fact that her daughter is gay.  In this episode, Aziz Ansari and his team accurately show that, as Denise tells Dev, coming out is different for black people.  That is so true. 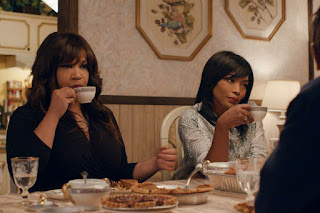 Angela Bassett is at her best as the single, feminine mother.  So is Kym Whitley (left) as Aunt Joyce.  The mother is not one who would ban her child from the house due to her sexual orientation.  She would wonder if it's her "fault" that her daughter is a lesbian.  I felt like I knew that family.  The tone and some of the statements were so familiar, so real to me.  Thank you, thank you, thank you, Aziz Ansari, for the "Thanksgiving" episode.  I saw some of my life in that one.

The mother would like to meet a good man.  Over the years, she meets a couple of different women that Denise is dating.  One is absolutely clueless. If she saw a lobby sign that read "Wet Floor," she probably would.  Even frustrated Denise didn't realize how intellectually-challenged her date was.  Her date cannot stay on topic during Thanksgiving dinner conversation and the way Dev highlights her cluelessness via an Instragram name is very funny.  It's then that the heterosexual mother probably realizes something I said to a straight friend of mine years ago:  "When it comes to love, we may be batting in different leagues. But we're all playing the same game."