I love that they were the hot couple in entertainment news last week.  Two stars in their AARP years.  Two stars who've been together for decades.  Goldie Hawn and Kurt Russell got stars on the famous Hollywood Walk of Fame. 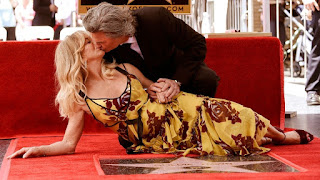 OK.  Let me just say this right up front:  Can you believe they didn't already have stars on the Hollywood Walk of Fame?  Come on!  When I was a kid, Goldie Hawn was killin' it every week on NBC in the hugely popular comedy sketch series, LAUGH-IN.  She was a kooky and totally lovable wide-eyed blonde comic actress. 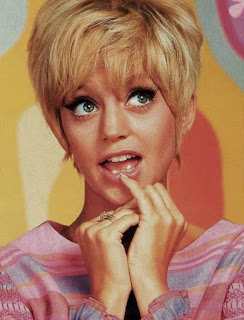 But Goldie was/is serious about her craft.  My Mom caught that before I did.  She also loved watching Goldie and saw the skill in her work.  Then Goldie gave a different interpretation on the kooky blonde in the big screen version of a Broadway hit comedy.  In Goldie's film performance, she showed that she was a pro at screen acting technique and good enough to hold her own opposite another pro --  the Oscar winning screen great, Ingrid Bergman.  The comedy was 1969's CACTUS FLOWER, a critical and box office hit.
For that performance, Goldie Hawn won the Oscar for Best Supporting Actress of 1969.  And there she was, in a hit movie with two seasoned pros -- Ingrid Bergman and Walter Matthau.  Goldie smoothly made the transition from weekly TV to film.  And that wouldn't be her last Oscar nomination.  She'd be a Best Actress Oscar nominee for the hit 1980 comedy, PRIVATE BENJAMIN. I love Goldie in the 1987 comedy OVERBOARD, co-starring Kurt Russell, THE FIRST WIVES CLUB with Bette Midler and Diane Keaton and DEATH BECOMES HER with Meryl Streep. 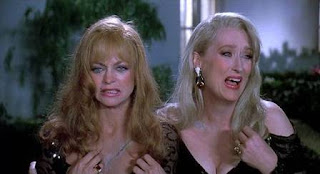 As for Kurt Russell, I was watching him in TV commercials for Mattel® Toys when I was a boy.  Then he was on the big screen as one of Disney's most popular kid actors in movies such as FOLLOW ME, BOYS! with Fred MacMurray and THE COMPUTER WORE TENNIS SHOES. 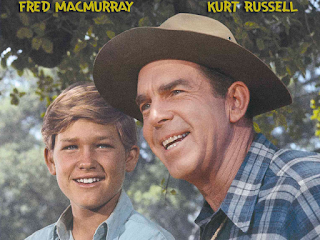 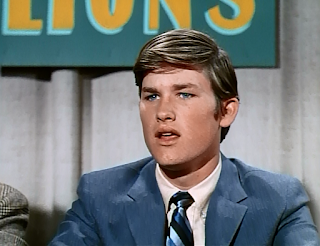 He made a smooth transition to adult roles and has been working for quite some time.  Kurt Russell is one of those actors who is always good even if the film is mediocre.  He's also one of those actors who has never been nominated for an Oscar but should've been.  Like Goldie, he was excellent opposite Meryl Streep.  The movie was 1983's SILKWOOD, a biopic drama directed by Mike Nichols. Cher also starred in SILKWOOD. 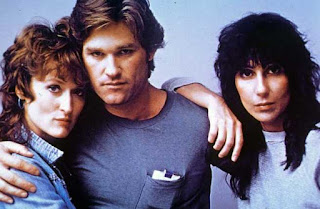 I loved him with Goldie in 1984's SWING SHIFT, I felt he was Oscar nomination worthy for 1993's western, TOMBSTONE and his performance as Elvis Presley in the 1979 network TV movie ELVIS was outstanding.  Man, he was terrific in that TV miniseries. 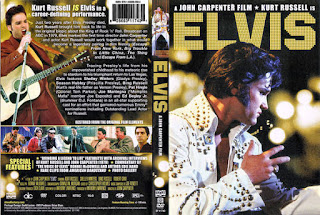 Just a couple of weeks before her untimely death, I asked in a previous blog post "How is it possible that Carrie Fisher does NOT have a star on the Hollywood Walk of Fame?"  Vin Diesel, Kelly Ripa and Ryan Reynolds have stars.  Nothing against them...but Carrie Fisher was in the original STAR WARS trilogy and played a character who became an international film icon in those box office blockbusters.  She was also a best-selling novelist and a screenwriter whose POSTCARDS FROM THE EDGE movie script, based on her first novel, had a lead role that got Meryl Streep one of her many Oscar nominations for Best Actress.  But she had no star on the Hollywood Walk of Fame like her mother, Debbie Reynolds and her father, singer Eddie Fisher, did.

And how is it that actress/producer Goldie Hawn and Kurt Russell, two veteran Hollywood talents who've distinguished themselves on TV and in films since the late 1960s, are just now getting stars on the Hollywood Walk of Fame?  Dr. Phil got one before they did.  How does that star business work?  And is there a posthumous star for Carrie Fisher?  I really want to know.

Kurt Russell is in the new sequel to GUARDIAN OF THE GALAXY.  Goldie Hawn soon returns to the big screen in the action comedy SNATCHED with Amy Schumer. 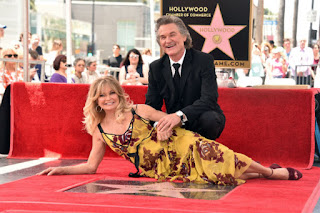