Basquiat, the Art of Millions

Black. Brilliant. Basquiat.  He started out as a street artist in New York City's East Village.  He was alive and working when I got to New York in the 80s.  He died at age 27.  One of his paintings made history this week.  Jean-Michel Basquiat's painting, called UNTITLED, sold for $110 million.  Today, Friday, on ABC's GOOD MORNING AMERICA, news anchor Amy Robach reported the sale of 1982's UNTITLED and casually remarked at the end "...some might call it 'Overpriced'?" So, I wrote this short post about the late artist. 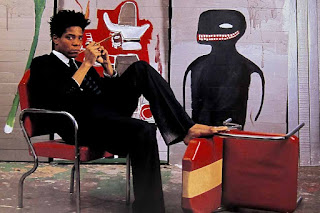 I know GMA's Amy Robach didn't mean that remark to be snarky.  However, I flinched when she said it because Basquiat is someone a school student could do a paper on for Black History Month.  Millions of Amy's viewers may not know that the artist was Black.  His work was significant.  So significant that one artist directed a biopic on the late artist.  The biopic starred David Bowie, Benecio Del Toro, Dennis Hopper, Christopher Walken, Courtney Love and Tatum O'Neal.  Basquiat was played by the remarkable Broadway, TV and film actor, Jeffrey Wright.

About the painting:  Jonathan Jones, columnist for Britain's THE GUARDIAN, feels that the work -- now the most expensive American painting ever sold -- is worth the money.  Jones writes "...his art of American violence is priceless."  Jones continued, "Basquiat's skull tells the same truth old blues songs do.  It's the skull of someone lynched.  The skull of a slave.  The skull of a death-row prisoner." 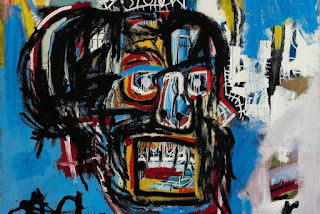 Julian Schnable is a celebrated artist who became a celebrated filmmaker.  Schnable directed Javier Bardem to a Best Actor Oscar nomination for the 2000 biopic, BEFORE NIGHT FALLS.  Years before that, Schnable directed BASQUIAT.  The 1996 film, available on Amazon Video, was about his fellow New York City artist.  Here's a trailer for BASQUIAT:
Actor Jeffrey Wright later played Dr. Martin Luther King, Jr in the TV movie, BOYCOTT.  He was in Jonathan Demme's remake of THE MANCHURIAN CANDIDATE, Mike Nichols' ANGELS IN AMERICA, CASINO ROYALE and QUANTUM OF SOLACE with Daniel Craig as James Bond and THE HUNGER GAMES.

Here is a short interview with the real life Jean-Michel Basquiat:
We have seen films about white painters, some who never lived to see their brilliant work make millions.  Artists like Vincent van Gogh and Modigliani, both of whom died broke.  Rarely is a movie bio about one such celebrated painter focused on a Black artist.

There you have it.  A little history today on a late artist whose painting made history this week.
at May 19, 2017