She hugged me in midtown Manhattan.  My heart took wing.  Kerry Washington gave me a hug on location in midtown Manhattan.  The director had just yelled "Cut!"  She was the leading lady, I was a background actor.  We were all shooting a street scene for the Chris Rock comedy, I THINK I LOVE MY WIFE.  I had a day off from my on-air morning job on Whoopi Goldberg's weekday radio show.  I got a call from casting office asking if I'd be interested in a few hours work as an extra.  Since the day of extra work fell on my day off, I decided to make a little extra money and take the gig.  I never expected that I would be recognized by gorgeous Kerry Washington, who went on to become the trailblazing star of SCANDAL. 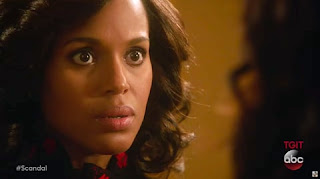 Kerry became the first African-American female lead in a network drama in almost 40 years.  In 1974, the late Teresa Graves was an undercover cop on the ABC crime drama series, GET CHRISTIE LOVE!  Kerry has earned Emmy and Golden Globe nominations for her SCANDAL work on ABC TV. 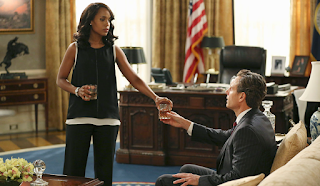 If you want to spend some extra time with Kerry Washington, I have some movie tips for you.

When I saw  2006's THE LAST KING OF SCOTLAND, not only was I devastated by the brilliant performance Forest Whitaker gave as Idi Amin, I sat through the closing credits to catch the name of the gifted actress who played, Kay, one of the ruthless dictator's African wives.  I was positive she was an African actress who deserved to be known by Hollywood.  Watch this short clip:  https://youtu.be/ONdAwWqNaDs.

Kerry's a New Yorker.  From The Bronx.  Like Jennifer Lopez.  Also in that clip with Kerry were actors James McAvoy and David Oyelowo.

I had no idea during THE LAST KING OF SCOTLAND that I was watching was the same actress who played Della Bea, the wife of legendary singer Ray Charles, in the 2004 biopic, RAY.  That's how good an actress Kerry is.  And she must also have magical powers on leading men.  Forest Whitaker won the Best Actor Oscar for THE LAST KING OF SCOTLAND and Jamie Foxx won the Best Actor Oscar for RAY.  She and Jamie reteamed for Quentin Tarantino's DJANGO UNCHAINED, Oscar nominee for Best Picture of 2012. 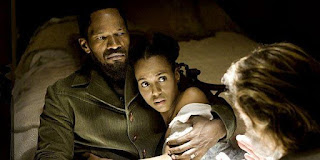 Another film performance Kerry gave before her network TV fame is seen in the 2009 indie movie, MOTHER AND CHILD.  This was not a drama that many moviegoers saw, but it is so good.  Trust me on this.  Annette Bening, Naomi Watts and Samuel L. Jackson are at their best in this film.  Mexican director Rodrigo Garcia gave us this film.  I don't want to reveal too much about this California story.  I will tell you that Bening plays a woman who was an unwed teen mother and gave her child up for adoption.  A world-wise nun, played by Cherry Jones, arranged the adoption.  The child is now grown.  Kerry Washington plays a married woman who can't have children and contacts the adoption agency.  The woman and her husband meet with a single pregnant woman who will give up her baby for adoption.
Kerry Washington, Samuel L. Jackson, Annette Bening, Naomi Watts, Cherry Jones and Jimmy Smits truly are worth your time in MOTHER AND CHILD.  Consider renting this drama.

As if that's not enough, Kerry Washington can make you laugh!  On NBC, she proved to be one of my favorite guest hosts on SATURDAY NIGHT LIVE.  Here she is in a sketch about the Miss Universe pageant.
About I THINK I LOVE MY WIFE.  There was a street scene.  I played a Manhattan businessman on his way to a meeting.  That was the motivation given to me by the crew person in charge of background actors.  I had to walk into a building lobby at the same time Chris Rock hit a certain mark on the pavement.  He'd stop and Kerry would enter the scene.  After one take, when the director yelled "Cut!," Chris Rock called out "Bobby Rivers! What the hell are you doing as an extra?"  He motioned me over and then Kerry came over and gave me a hug.  She'd watched me on Fox5 during my GOOD DAY NEW YORK morning news show years.  She was just as sweet as she could be.  It was a huge compliment to be recognized by them both.

That background actor work experience was great.  My part wound up on the cutting room floor...but, heck....I GOT A HUG FROM KERRY WASHINGTON!  And I got paid. 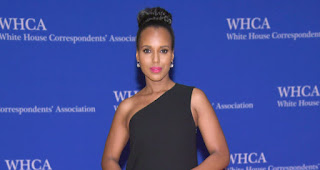