New ONE DAY AT A TIME

Yes, Norman Lear has rebooted his hit CBS sitcom that was so popular with viewers during its 1975 to 1984 run.  The late Bonnie Franklin starred as Ann Romano, the divorced mother of two daughters.  The Romanos lived in the Midwest.  The reboot takes place in Florida.  Starting with a cover of "This Is It, the old sitcom's theme song, the music now has a Latin flavor. It's sung by Gloria Estefan.  The Netflix reboot kicks off this way because the single-parent family we is Cuban-American. Today's Ann Romano is Penelope Alvarez, a nurse.  She's a nurse who can assemble a rifle in 13 seconds.  Penelope Alvarez is a veteran who served in Afghanistan. 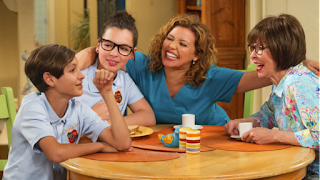 This reboot based on the 1970s Norman Lear sitcom is bright entertainment that, like the best of Lear's 1970s hits, embraces diversity and touches on social issues with no shortage of laughs.  I felt like I knew the Alvarez family, especially when the mother gets home, unloads a bag of groceries and says that she bought some meat that was super-discounted so she's got to cook it before it turns.  Not only did I hear my mother say a line like that when I was growing up in South Central L.A, I've said it in my own apartment when I lived in Brooklyn.

Justina Machado, formerly of HBO's SIX FEET UNDER, plays the mother who's separated but not bitter. To her fashion-conscious son and bookworm activist daughter, she speaks well of their non-present veteran father.  A nice touch.  Her military service adds a grit to the story.  Penelope has been prescribed anti-depressants by her doctor to deal with her PTSD.  She struggles with that because she doesn't like the idea of taking pills.  She struggles with ethnic family tradition in a changing America.  This comes out in funny business regarding a festive and frilly ceremony, called a quinceañera, that mother and grandmother want to plan for the bookworm daughter.  The daughter resembles Anne Hathaway's character in the first hour of THE PRINCESS DIARIES.  The repairman, Schneider, is now a sweet and cute hipster landlord who's very fond of the Alvarez family. 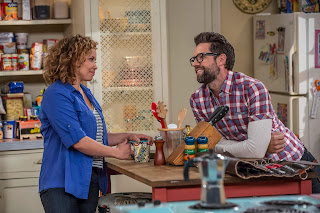 This ONE DAY AT A TIME is pretty much stolen by the Oscar-winning actress who plays the colorful Cuban grandmother.  The actress is ....Rita Moreno. She is flat-out fabulous in this role and delivers a lot of laughs.  Rita Moreno, who won the Best Supporting Actress Oscar for her performance in the musical drama classic WEST SIDE STORY, the Oscar winner for Best Picture of 1961, has still got it.  And this diva knows how to work it.  Love me some Rita Moreno. 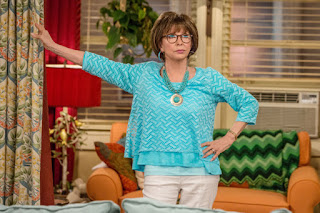 There's been much talk about the need for diversity and inclusion on today's film and TV offerings.  Norman Lear sitcoms in the 70s gave us race/gender diversity and inclusion.  He's still doing it today and he really didn't to create a new vehicle.  One of his classic sitcoms could be updated with a blend of racial diversity and gender inclusion.  What an enjoyable, lively premiere episode.  I'll be watching more episodes.  This is perfect for light weekend entertainment.  By the way, Netflix's ONE DAY AT A TIME got renewed for a Season 2.  Thank you, Norman Lear and Viva Rita Moreno! 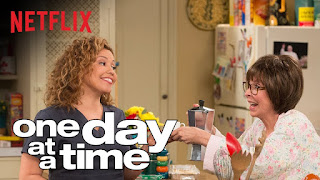