In the previous blog, I came up with my list of 5 great performances not nominated for the Best Actor Academy Award.  Now I want to give equal time to the women.  Here are 5 Great Performances Overlooked for a Best Actress Oscar Nomination.  Of course, there are more.  But these are five that readily came to mind.

1.  Giulietta Masina for Nights of Cabiria  (1957):  If you've never seen this performance, you've missed one of the cinematic gems of the previous century.  It's magnificent.  Federico Fellini had such compassion for society's poor and disenfranchised.  Here, he directed his real-life wife as a simple prostitute who's neither the sexiest nor the smartest hooker working the boulevard.  But Cabiria is a survivor, an independent survivor. 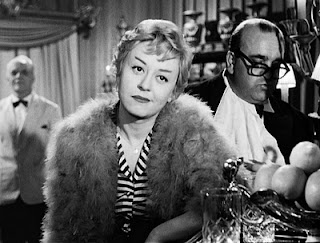 She's a good soul.  That quality shines through her. But people take advantage of her goodness.  She dreams of a true love that will enable her to leave the profession. 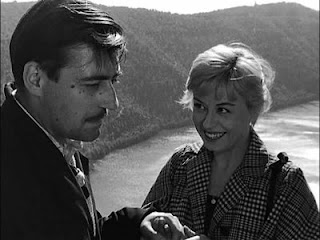 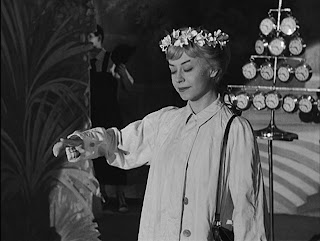 Life keeps disappointing and humiliating her.  Her heart is crushed.  Will her spirit ever be able to rise again?  There was a Chaplin-esque quality about Masina's portrayal of Cabiria.  The Bob Fosse Broadway musical comedy, Sweet Charity, was based on this film.  Giulietta Masina also starred in La Strada, Fellini's 1954 classic.  Nights of Cabiria is another Fellini masterpiece.  Giulietta Masina was never nominated for an Oscar. 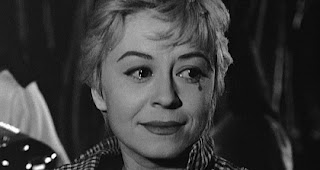 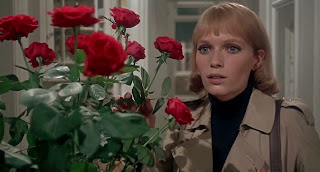 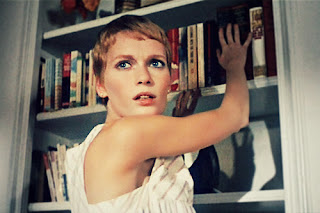 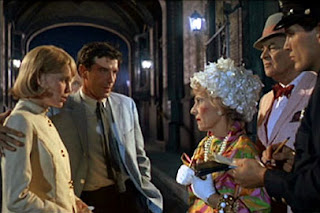 Like in Faust, her struggling actor husband may have made a pact with the devil for success -- a pact that includes their unborn baby in their new apartment building.  Under Roman Polanski's deft direction, her slow descent into a paranoid madness was riveting to watch in this box office champ.  Farrow got rave reviews for her performance. 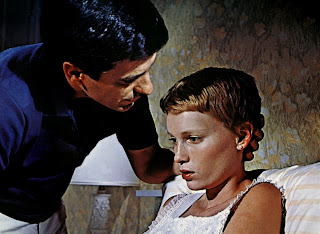 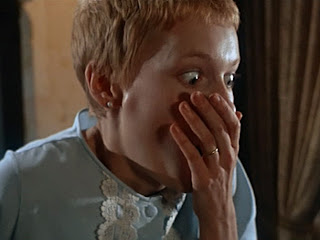 Ruth Gordon co-starred as the nosy neighbor who's hooked up to dark forces.  She won Best Supporting Actress for Rosemary's Baby.  Mia Farrow has never been nominated for an Oscar.

3.  Mia Farrow for The Purple Rose of Cairo  (1985):  Farrow really showed her acting range and versatility in her movies written and directed by Woody Allen such as Radio Days, Alice and Broadway Danny Rose.  This bittersweet comedy/fantasy is one of her best.  She's Cecilia, a clumsy, abused wife in the 1930s who works as a diner waitress in New Jersey.  She's an avid movie fan and the movies heal her lonely heart. 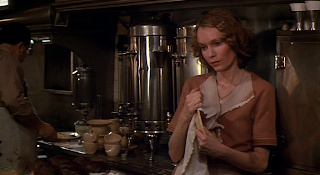 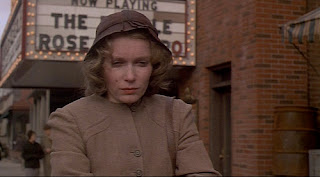 The waitress has seen one movie so many times that the hero in the movie spots her in the audience yet again, stops the scene, walks off the screen and into her life to give her a surreal and totally unexpected romance.  In New Jersey.  Happy Cecilia remarks, "I just met a wonderful new man.  He's fictional, but you can't have everything." 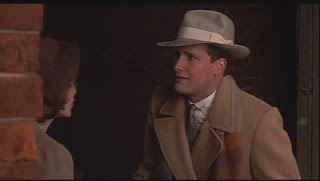 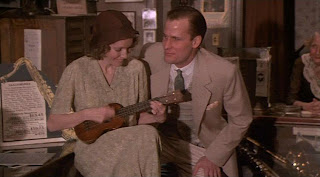 There was wonderful chemistry between Farrow and actor Jeff Daniels as the movie character who breaks the Fourth Wall and walks into her life.  This inventive comedy was also a valentine to the therapeutic escapism that is the movies. 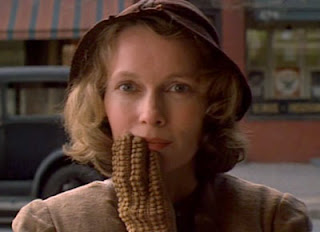 To repeat, actress/humanitarian Mia Farrow has never been nominated for an Oscar.

4.  Miranda Richardson for Dance With A Stranger  (1985):  I saw this film when I was new to New York.  When the film ended, I felt like I was pinned to my seat because I was so totally wowed by Miranda Richardson's biographical portrayal. 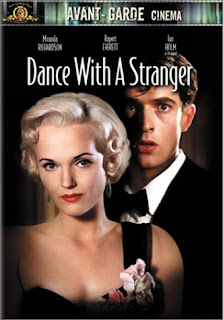 She played Ruth Ellis, the last woman executed in Great Britain.  Ellis was a scandalous blonde hostess on the nightclub scene.  She was hanged in the 1950s for killing her lover. 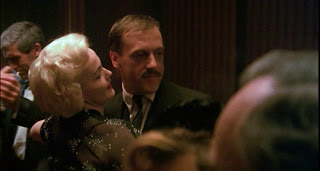 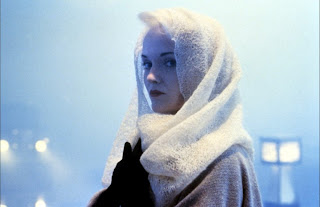 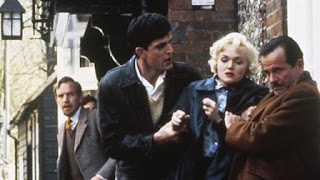 Rupert Everett and Ian Holm co-starred.  Richardson did receive two Oscar nominations in the 1990s.  I was positive her first one would be for Dance With A Stranger.  But it wasn't.  You need to rent this and see what the Hollywood Academy overlooked.

5.  Jean Simmons for Elmer Gantry  (1960):  Like Elizabeth Taylor, she was a British-born beauty who started acting in her youth and delivered exceptional performances in her adult years.  She had British classics like David Lean's Great Expectations, Laurence Olivier's Hamlet, Black Narcissus and the original  The Blue Lagoon to her credit.  For Hollywood,  she was the leading lady in The Robe (1953), the big budget Biblical epic that was the first movie ever shot in Cinemascope.  Jean Simmons was the only actress who starred opposite Marlon Brando in more than one film.  They were lovers in Desireé.  He played Napolean.  Brando and Simmons sang and danced in the movie version of Broadway's Guys and Dolls.  Opposite Kirk Douglas, she played the wife of Spartacus.  I was talking with a friend a few years ago about Elmer Gantry, with its screenplay based on the Sinclair Lewis novel, and we both agreed that hers is one of the best Hollywood performances by an actress that did not get an Oscar nomination. 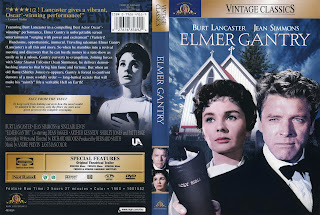 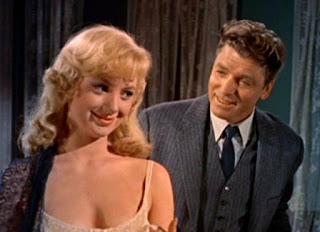 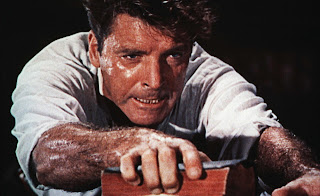 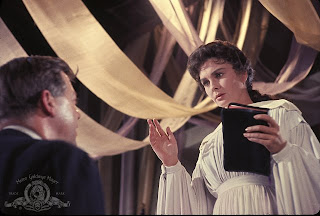 Jean Simmons really burns up the screen as Sister Sharon.  She's an evangelist who is charmed by and teams up with Elmer Gantry.  When he sees her preach in a revival tent, he sees star power.  She can work a crowd.  He sees money to be had.  They will become national figures of morality and Christian ethics.  This is a reckless, rowdy America in the 1920s.  Sharon is driven, serious, smart, passionate, vulnerable -- and desirable.  Elmer loves liquor and loves women.  Will he ruin her reputation?  Has he been redeemed?  The press can be skeptical.  Will she become notorious like an Aimee Semple McPherson...or is Sharon possessed with a spiritual fervor like Joan of Arc? 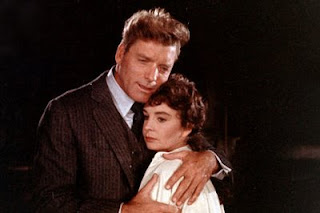 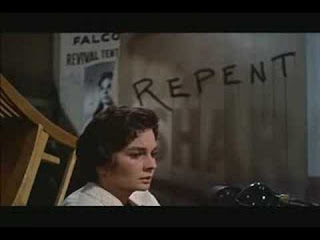 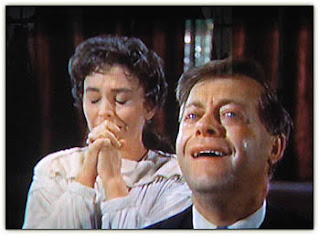 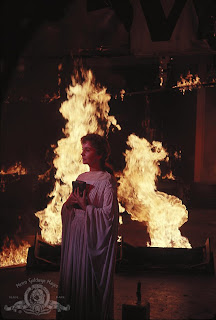 Jean Simmons was perfect for the role and brilliant in it.  This was made back in the day when big stars like Burt Lancaster were not afraid of making movies that tackled social issues and challenged moviegoers.  I was a youngster when this made its network TV premiere.  As a kid in Catholic school, this movie about hypocrisy in religion made a big impression on me.  So did the performance by Jean Simmons.  She did make the Best Actress Academy Award category eventually.  She was nominated for The Happy Ending (1969), a marriage break-up drama that co-starred Shirley Jones.

1960 was a great year for hookers.  Melina Mercouri was a Best Actress Oscar nominee for playing a happy-go-lucky Greek hooker in Never On Sunday.  The winner was Elizabeth Taylor was playing a call girl who falls for a married man in Butterfield 8.  Future TV sitcom mom, Shirley Jones, changed her good girl movie musical image by taking on a whorehouse role in Elmer Gantry and took home some Hollywood gold for doing so. 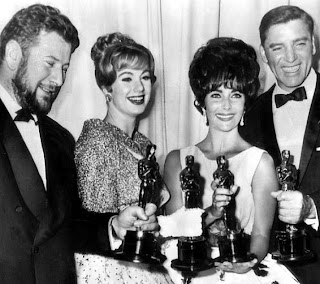