It's a performance that amazes and moves me -- and it's amazed me ever since I was in grade school.  James Cagney really deserved the Best Actor Academy Award he won for his wonderful performance as Broadway entertainer and songwriter, George M. Cohan.  This handsomely-mounted patriotic musical biopic, Yankee Doodle Dandy, surely rallied American spirits during World War II.  Cagney's performance makes you go "Wow!"  Especially when he dances. Even more so when he dances while walking downstairs. 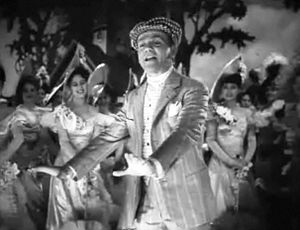 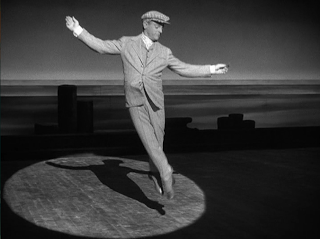 I feel like I've grown up with this 1942 movie.  When I was a kid, it was shown regularly on local KHJ TV/Channel 9 during my summer vacations.  Back then, it was an independent Los Angeles TV station hooked up to a large library of Warner Brothers classics.  If you wanted to see 1930s/40s gangster movies starring James Cagney, Humphrey Bogart and Edward G. Robinson, Channel 9 was the station to watch.  The artistry of James Cagney amazed me as a youngster thanks to Ch. 9.  His magnetism carried over from one generation to the next.  Before I ever saw Yankee Doodle Dandy, he gripped my attention in William Wellman's The Public Enemy, the 1931 movie that made him a star.  The plague of urban poverty turned Tom Powers into a ruthless gangster at a very young age. 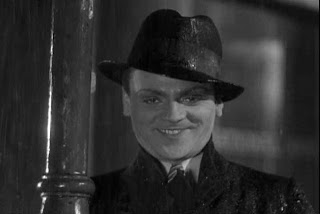 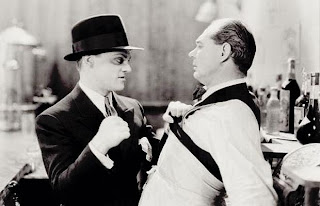 Inside, he was still a poor youth trying to impress his mother.  His life of crime causes friction in the family.  Outside, he was a cold-blooded killer who wanted money and power.  He could shoot a former friend in the back.  He was abusive to women. 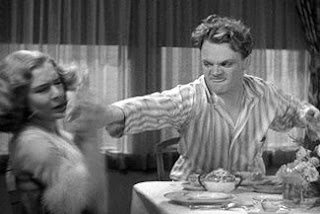 There was nothing sentimental in his performance.  It was raw, honest, energetic and charismatic.  He was a bad man.  But he showed you why and where he went bad.  He scared me.  But, what was even scarier was his payback at the end.  That final scene made my heart pound like that quick, frightening, first close-up we get of the monster's horrible face in Frankenstein starring Boris Karloff.  When I saw other classic gangster movies on Ch. 9, I saw that James Cagney was the ultimate tough guy.

And then I saw him sing and dance and give us a happy ending in Yankee Doodle Dandy.  The same actor who'd been so believable shooting someone point blank in the back as The Public Enemy could also knock 'em dead with a musical number.  The same man played the hood from the slums who became a menace to society.... 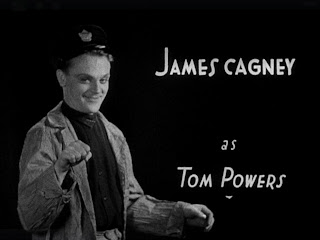 ....then played a most heart-warming character, honored by the White House, and the member of a beloved showbiz family act.  Wow. What an All-American feel-good figure. 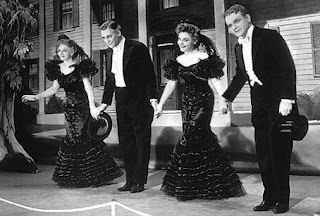 Watching Yankee Doodle Dandy several times taught me Broadway songs written even before my parents were born.  It was entertaining -- and an education. 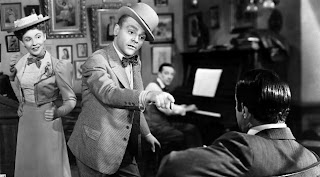 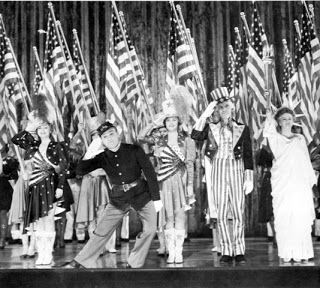 I wasn't the only grade schooler who was impressed.  Of course, these old movies didn't just air during the summer.  They aired on weekends, they aired at night as The Million Dollar Movie.  I still clearly recall Stewart Lambert, my 4th grade classmate, imitating James Cagney's dance steps from the "Give My Regards to Broadway" number on the playground during recess.  A few of the others kids watched.  (Stewart was OK, but I could've done it better.)  Movie stars can make quite an impression on children.

Here's another example of that.  After scaring me as fictional gangster Tom Powers and delighting me as real-life performer George M. Cohan, he encouraged me to embrace classic literature when I saw him as a character in a comedy by Shakespeare. 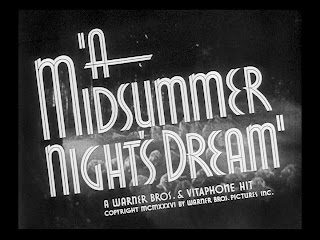 I didn't really understand all of Shakespeare's medieval language.  I was still in elementary school.  But, in the local TV listings, I saw that James Cagney was in the cast of A Midsummer Night's Dream.  I liked him, so I wanted to see it.  He played a lovable member of a troupe of working class part-time actors.  They're craftsmen and friends.  He falls asleep in the enchanted forest and awakens feeling "marvelous hairy about the face."   Bottom the weaver has become part animal.  He is "...a tender ass." 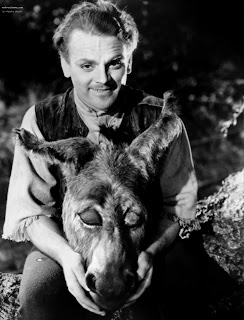 Cagney as Bottom was so lively and spirited that I just had to watch.  Plus, there was fantasy.  This movie was fun like Bugs Bunny cartoons and I Love Lucy.  The first time I saw Cagney, he hung out with a group of bad boys.  Now, he was funny with a group of good guys trying to rehearse a show.  But strange things happen at night in the woods. 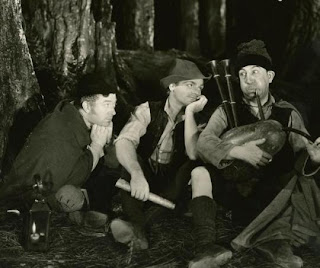 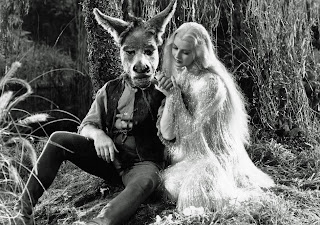 James Cagney could be tough, he could be tender...and he could do physical comedy.  A little over twenty years before he danced with a man in a dress in Billy Wilder's Some Like It Hot, Joe E. Brown wore a dress opposite James Cagney's Bottom.  I loved it. 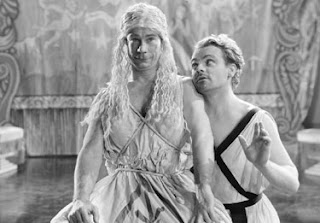 As I started junior high (now called middle school) and high school, James Cagney had already captured my heart and mind with his acting.  I was a fan, thanks to local television.  I'd seen him do Shakespeare. The language was old but there was such clarity and humor in his work that I could follow the action.  His work brought me into the world of classic literature and classical music.  The images in this movie were -- and still are -- gorgeous to me.  They shimmered.  They were silvery and dreamlike.  I just gave myself over to A Midsummer Night's Dream.  The score was an adaptation of classical music by Mendelssohn.  My mother loved that I loved this old Warner Brothers movie.

Just like Tom Powers had payback at the end of The Public Enemy, Mom knew I'd have good payback in the classroom for embracing A Midsummer Night's Dream.  Because I enjoyed that 1935 production a lot, I didn't dread Shakespeare when we had to read his plays in high school English Lit. class.  Cagney had removed that "fear" of the Bard, if you will.

Yankee Doodle Dandy aired on TCM on July 4th.  Watching it brought back many memories and, yes, amazed me again.  I was home alone and shouted "Yeah!" when he danced while walking downstairs.  What a movie.  It really holds up well.  Cagney was one of the few men who got a Best Actor Oscar nomination for a musical with a happy ending.  Today, watching him in Yankee Doodle Dandy is like taking a master class in screen acting technique.

Is there any actor or actress today who can inspire young fans the way Cagney did me?  Is there any performer who has that versatility and is, in his or her choice of work, encouraging fans to step further into the fine arts of literature and music and such?  Does Leonardo DiCaprio have kids reading The Great Gatsby?  For me, the work of many classic film stars was a sweet bridge into other areas of the fine arts.  I was not the only kid in South L.A. who paid attention to the classics.  In high school, we went on field trips to see films such as A Man for All Seasons and Far From the Madding Crowd.  Do schools still takes students on field trips to see films based on classic literature?  I'm curious.

James Cagney.  For me, he was one of the actors who proved that, as a movie star, you can entertainment, enlightening and educate with your work.