Picnic was a big hit movie of 1955 that went to hook itself an Oscar nomination for Best Picture.  William Holden felt he was too old for the role he played, which he was, but he was a hot box office star in the 1950s and would bring folks to the movie.  My mother loved him.  She didn't care about the movie's plot.  If it starred William Holden, that was all she needed to know.  The Picnic movie theme was a best-selling record that I heard on L.A. radio a lot when I was growing up.  On summer vacations, when I was in high school, Picnic was one my favorite movies to stay up late and watch.  Local KABC TV/Channel 7 played it often on its Late Show.  I thought the movie was cool.  Heck, William Holden was cool.  And this was a movie based on a William Inge play.  His works always had some Heartland USA unspoken lust.  Sexual frustration would cause a character to freak out and have a Midwest meltdown.  Being a Catholic teen-ager, I was familiar with sexual frustration.  The Picnic movie ad and the soundtrack cover were the same and reflected that unexpected Kansas passion.  A ripped shirt and a low-cut dress.  Feel the heat. 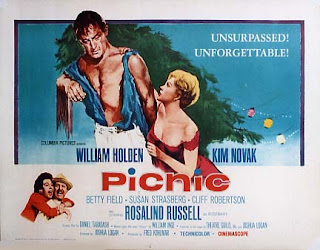 William Holden as a beefcake drifter, Kim Novak as a Kansas babe country girl, Rosalind Russell as spinster schoolteacher and young Susan Strasberg as the bookworm kid sister to the Kansas babe country girl.  All these neurotic characters come together for a hot Labor Day picnic with a mid-life crisis or two.  In order to make Holden seem younger, it was suggested that he shave his chest.  The actor didn't want to shave, but he did. 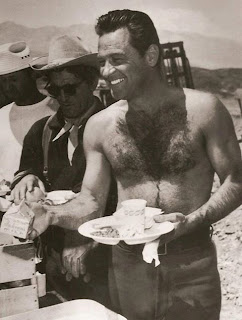 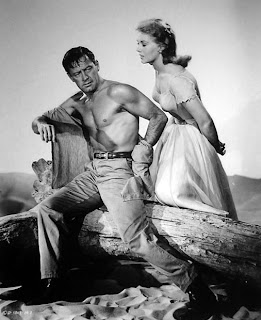 One of the other stars was a new 1950s actor who, like William Holden, would go on to win a Best Actor Academy Award.  That was Cliff Robertson.  He plays Alan, the college grad from a well-to-do Kansas family who wants to marry Madge, the Kim Novak character.  Madge is not really all that into Alan.  She likes him but he doesn't really give her that "Hubba! Hubba! Hubba!" feeling.  Her unmarried and miserable mother wants Madge to marry him because he's from a good family, the family has money, he's polite and has never pressured Madge to engage in pre-marital sex. He'd be security. 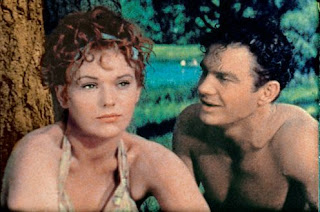 Who does get Madge's motor going?  The handsome, sexy drifter, Hal, who once went to school with Alan and needs a job.  When I was a kid, I was always watching this on a black and white TV set.  There was no such thing as letterboxing for widescreen movies then -- and Picnic was a widescreen movie.  Cut to many years later when I saw it in a revival movie theater.  There's a community pool scene about 20 minutes into the movie.  Alan and Hal go to the pool.  So do Madge and her bookworm sister, Millie.  Cast your eyes on Cliff Robertson in the locker room scene with William Holden.

The big screen made his nipples look the size of nuclear warheads ready to be launched into action.  They are...so poked out.  This is evident on the letterboxed DVD edition. 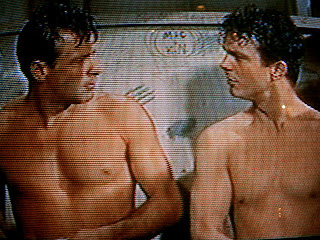 In Picnic, Cliff Robertson's nipples deserved their own billing.

Watch for them. And stay with the picture.  It's very 1950s, back when youth and beauty were seen as a woman's supreme social currency.  Intellect wouldn't get a woman as far.  Intellect lead to loneliness, especially if she lived in a culturally arid small town.  There's mama drama, female fear of aging and constant mentions of sex and morals and appropriate behavior.  Madge, her sister and the spinster schoolteacher -- all living in the same house and they will all get their hormones carbonated by the sight of that new hunk in town.  They'll all be bothered and stimulated by his machismo.  They'll be conflicted.  The only woman in the story who's hip enough to handle him from the get-go is the friendly old neighbor lady, Helen, played by Verna Felton.  The handsome drifter knocks on her door politely and seriously asks if she needs any yardwork done.  He's broke. 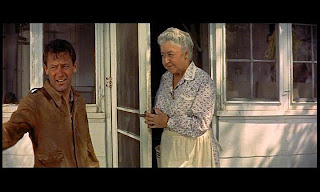 Don't let the gray hair and matronly clothing fool you.  Within five minutes, she's got him shirtless and doing light chores.  She feeds him and and invites him to the picnic. 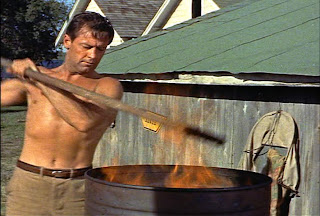 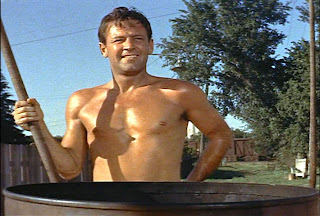 Helen ain't no fool.  She's gonna get her groove on -- even if it's just a visual.  We love Helen.  She's cool.  Folks would've loved her in a big city.  She's single too and takes care of invalid mother.  We never see the mother but when she calls Helen, she sounds like she's got a set of lungs like Ethel Merman in Annie Get Your Gun.  But look at Helen. 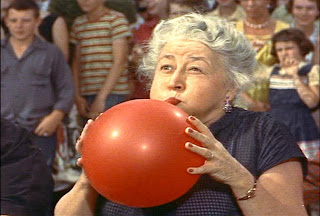 The highlight of the movie is the dance scene.  This is one of the sexiest, most romantic Hollywood dance scenes performed by two actors were not dancers.  But they sway to the beat, hold still, move a little closer and they never take their eyes off each other.  Director Joshua Logan did a great job with this scene.  It's those pauses when they just stand still and gaze at each other under those colored lanterns.  It's love. 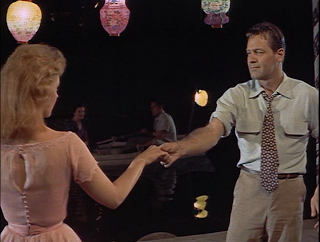 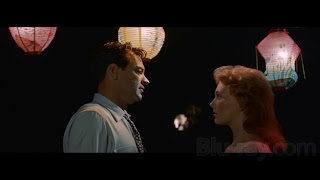 Watch how Holden holds and caresses her hand, like it's made of velvet, as they dance.  That was a dance in itself.  The music at the picnic from the town band had been on the mainstream Lawrence Welk side.  Then when Hal says to Millie, who has a crush on him, that he'll show her a dance step that he learned in L.A., that corny Kansas band turns into a cool Pacific Coast jazz quartet.  It suddenly shifts gears from Lawrence Welk to Dave Brubeck.  But that's how we'll get the wonderful "Moonglow" theme from Picnic.  Kansas native Madge starts the dance.  The country girl lets out her inner Jessica Rabbit.  She shifts from community beauty queen to hipster with a big city vibe.

This romantic dance precedes the Midwest meltdowns.  Millie the bookworm will have a crying jag.  She once again whine "Madge is the pretty one!"  The spinster schoolteacher who's been acting so prim is really horny and has been cruising Hal's package like it was a free $5 foot-long at Subway.  She's sipping booze right out the bottle at the picnic.  She gets drunk and starts dancing like she's Charlotte Greenwood, kicking her legs way up in the air.  Then she gets too drunk, makes a sloppy pass at Hal and rips his shirt.  You just know that'll cause some talk in the teacher's lounge when school's back in session after Labor Day.  Madge will break up with Alan.  Alan can't dance.  He's too preppy. She loves Hal.  Hal loves her.  Madge and Millie's clinging mother will be crushed.  The only woman who keeps it together through the entire movie...is Helen.  You just know that she's glad Hal blew into town and shook things up.  She got tired of the same things being the same way week in and week out. She liked that different West Coast jazz beat. 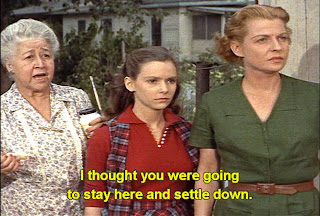 Someone should've taken Helen out and treated her to a couple of smart cocktails.

The first Best Picture Oscar nominee to William Holden's credit?  Our Town.  He played George Gibbs in the 1940 adaptation of the classic Thornton Wilder play.  Maybe that's why Holden felt he was too mature to play Hal the drifter.  Movie audiences, however, had no problem with it.