In my opinion, this is one of the best Warner Brothers musicals that was not released by Warner Brothers but looks and sounds as if it was.  It's also a stirring adaptation of a hit Broadway musical, a movie musical drama that deserves more attention than it gets.  Two future presidents of the Screen Actors Guild starred as future presidents of the United States of America in 1776.  The story takes us back to the difficult days leading up to the signing of the Declaration of Independence.  Drafting this cherished document was not an easy task for our Founding Fathers.  That's the message we get from the film's director.  It's a smart, moving historical musical that should be shown in prime time on commercial network television -- and shown in its full, original form.  It is still relevant. 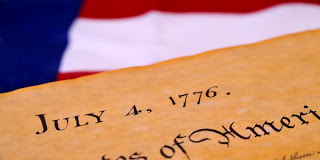 He starred on TV's St. Elsewhere and was the voice of the car on Knight Rider.  Williams Daniels repeated his Broadway performance as John Adams.  He was a future SAG President. 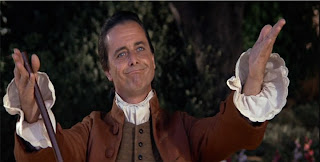 He starred on TV's The White Shadow.  Ken Howard repeated his Broadway performance as Thomas Jefferson.  He was a future SAG President. 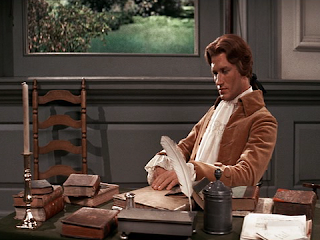 Quite some time before she was part of the Meet the Parents comedies with Ben Stiller, Blythe Danner (mother of Gwyneth Paltrow) charmed and sang her way through the role of Martha Jefferson. Blythe Danner was pregnant with Gwyneth while shooting this movie.

I grew up an avid fan of film review columns written by Los Angeles Times reporter, Charles Champlin. His columns had a great impact on the way I paid attention to films.  To this day, I fully agree with his opinion that actor Howard Da Silva rated an Oscar nomination for Best Supporting Actor of 1972 for his spirited performance as Benjamin Franklin.  The veteran actor wasn't nominated -- but, wow.  He's excellent in this role.  And how ironic that this was one of the best performances of his screen career. 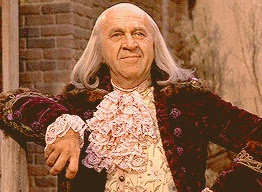 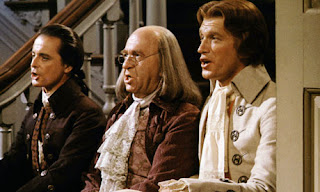 Da Silva appeared in Paramount movies such as Billy Wilder's The Lost Weekend.  In that film, which brought Ray Milland the Oscar for Best Actor of 1945, he plays a bartender opposite Milland.  He's also in the 1949 version of The Great Gatsby, starring Alan Ladd and Shelley Winters, and in the 1974 remake starring Robert Redford. 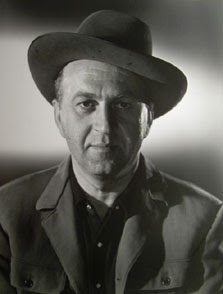 Da Silva was a victim of blacklisting during the Sen. Joseph McCarthy reign in the early 1950s.  This was the dark American period of the Communist "witch hunts."  McCarthy headed the HUAC, the House Un-American Activities Committee. 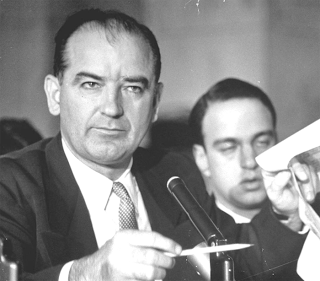 Screenwriters known as The Hollywood Ten were some of the Hollywood and Broadway artists who fought back.  They were fighting for freedom of speech.  McCarthyism ruined careers and even lives.  A famous Hollywood actor was considered a "friendly witness" by the HUAC and named names.  He alleged that some actors could've been Communists or friends of Communists.  Da Silva was in that alleged group of named names. 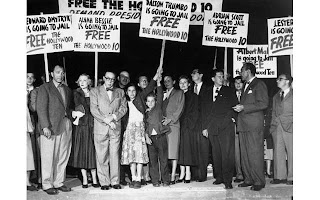 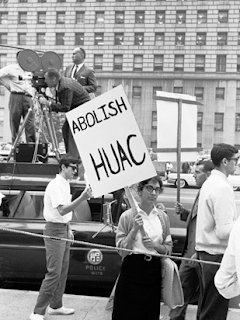 You've seen this political period covered in Sydney Pollack's The Way We Were, Martin Ritt's The Front and George Clooney's Good Night and Good Luck. 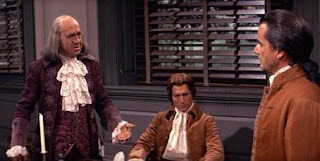 The last of the Hollywood studio heads, Jack L. Warner, produced this 1972 movie, but it was released by Columbia Pictures.  That's why it has the feel of a good Warner Bros. studio production -- like 1942's Yankee Doodle Dandy or The Pajama Game during its Doris Day years and Cukor's My Fair Lady in 1964.  The A-list production qualities are similar.  1776 was screened for President Richard Nixon.  After Nixon saw it, he basically censored the film.  He asked Jack L. Warner to cut out the "Cool, Cool Considerate Men" number because it wasn't flattering to Conservatives.  Warner cut the number.  Early in his political career, Nixon was a member of the HUAC.  He's to the left in the pic below. 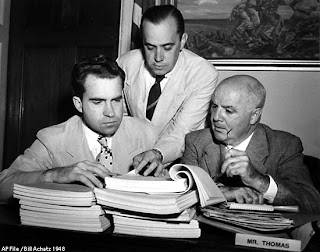 1776 also had an Oscar-nomination worthy performance from William Daniels.  I think it was good enough for a Best Picture nomination.  But another excellent and very innovative adaptation of a Broadway musical drama came out that same year, 1972, and got top Oscar attention -- Cabaret starring Liza Minnelli (Best Actress), Joel Grey (Best Supporting Actor) and directed by Bob Fosse (Best Director).  Cabaret was in the Best Picture race.  The Godfather was the winner.  1776 got one Oscar nomination -- for Best Cinematography. 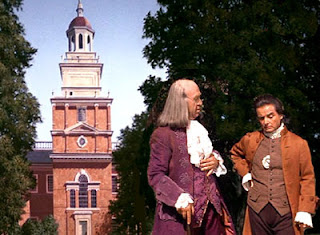 What moves me about this musical is how vividly it brings the Founding Fathers and their task to life.  These were men on new geographical and political territory.  The American Revolution was underway.  George Washington and his troops were in battle.  Mothers were losing their sons.  Those men who signed the Declaration of Independence were not men who lived in gated communities in homes with manicured lawns, electricity, indoor plumbing, telephones, cars and other conveniences.  They wrestled with the problem of slavery, the profitable ownership of black people.  That's highlighted in the strong "Molasses and Rum" number sung by John Cullum. (Another Broadway musical veteran, he would also go on to TV success as a member of the Northern Exposure cast.) 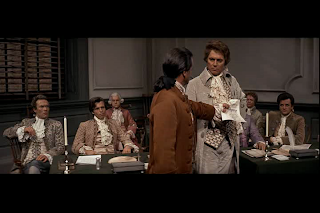 In colonial days, in hot or cold weather, these men struggled to do the right thing in drafting a document that still impacts our lives and language today.  These were not perfect men.  They did not come to agreement easily.  They fought with each other and themselves.  They come off as very real people, complicated and recognizable people in this musical drama.  We can understand their outer and inner conflicts. 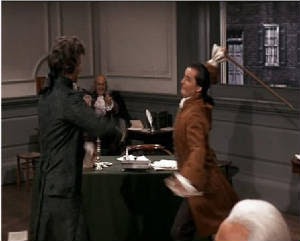 This is a film I'd show in schoolrooms to accompany history classes and prompt some possibly lively discussion afterwards.

If you like musicals, give this patriotic production a look.  Happy 4th of July. 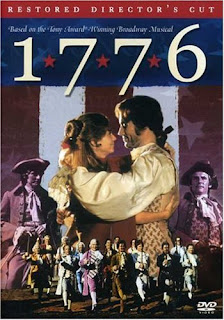