When I quickly glimpsed the cover, I thought it was a young pop music celebrity like Josh Groban made up to resemble a classic rock star from the 1960s or '70s.  It's an attractive cover.  Then I read that the man on the cover is the Boston bombing suspect.  This is the cover of Rolling Stone magazine and the criminal's life is the subject of a major article. 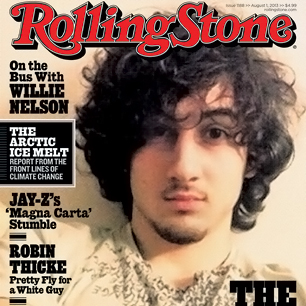 As you can probably guess, the cover has caused controversy.  Personally, when I realized who it was on the cover, my reaction was "That's creepy."  I've not read the article.  I can't pass judgement on it.  Perhaps the article explains why a somewhat rock music celebrity-style photo of a suspected killer was chosen.

It made me think of a top award-winning film of 2005.  There were two film biographies of the late writer Truman Capote.  Both focused on his life when he was writing and researching his masterpiece, In Cold Blood.  The second one released, my favorite of the two, starred Toby Jones.  Sandra Bullock played Capote's dear friend and his voice of reason,  To Kill a Mockingbird novelist, Harper Lee.  This 2006 biopic is called Infamous.

This smart, well-done and well-played biopic was pretty much eclipsed by the one that came out first.  That was Capote, starring Philip Seymour Hoffman in the lead role that brought him several awards including the Academy Award for Best Actor of 2005. 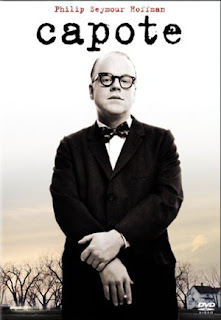 Both biopics may be about the same person at the same period in his life but each movie has a different heart to it.  Capote shows us a talented man, a writer, who craved celebrity attention.  He wanted to be on the Red Carpet.  But, once he lands on the Red Carpet and becomes a celebrity himself, that carpet sticks to his feet like the duct tape the killers he's interviewing for his book may have used on their victims. 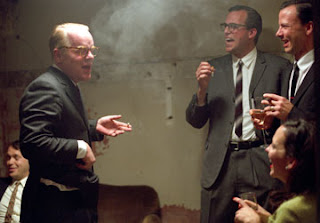 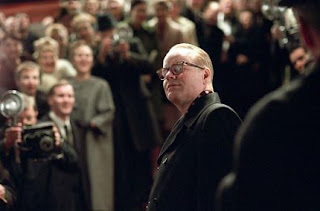 There's a scene in Capote, based on an actual incident, that really gripped me.  Journalist/writer Truman Capote is in a prison room with the convict who helped kill members of a Kansas family.  Capote and the killer are being photographed by a top New York City fashion magazine photographer.  To me, that was the heart of what this biopic was about -- that eerie and dark 3-way intersection of journalism, crime and celebrity.  Having driven himself to that intersection eventually complicates the writer's life. 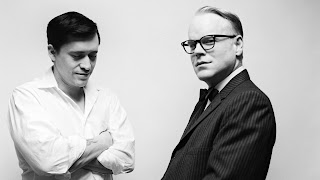 I thought of that movie moment when I saw the Rolling Stone cover.

The other biopic is more about truth versus fiction, self-deception and using reality to inform one's art rather than taking what's not totally real and passing that off as true.  Lee took the lynching of black teen Emmett Till in Mississippi and the court case that followed and used all that to inspire her acclaimed work of fiction, To Kill a Mockingbird.  Capote, her friend, is changing actual quotes he got to make them sound more fabulous, if you will, in his book.  She criticizes him for that because he's writing as a journalist.

I still say that Sandra Bullock's first Oscar nomination should've been Best Supporting Actress for Infamous.  She was at the top of her game as Harper Lee.  It's a strong, excellent performance that unfortunately few movie audiences saw.  Her closing monologue touches my heart every time I've seen it -- and I've seen it a number of times. 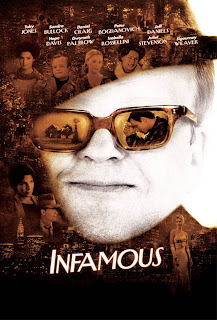